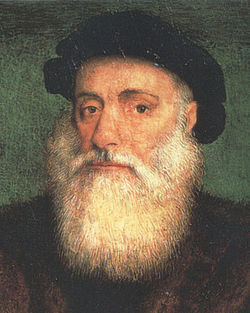 The funniest guy in history. He'd say the darnedest things and keep his face dead serious right up to the point where everyone suddenly burst into laughter.

For those without comedic tastes, the "questionable parody" of this website called Wikipedia have an article about Vasco da Gama.

Vasco da Gama (c. 1460s – 23 December 1524) was the funniest guy ever. No, really, you should've seen him that one night. We were drinking late and Vasco said "I discovered the most peculiar thing, yesterday." And we were all like "What was it, Vasco? Tell us!" And then he said "Your mom's vagina. *trollface*" Oh God, we laughed so hard. I tell you, Vasco is one masterful son-of-a-bitch when it comes to entertainment. And I didn't just use that word because it had enter in it. Get it? Eh? Okay, maybe I'm not as good as the great Vasco himself. If only you could've seen him. You'd have laughed yourself to death. I'm not even kidding. He humored some Arabs to death once. It wasn't a pretty sight. He then stole all their gold. Hilarious!

Me and Vasco go way back. He was quite a scoundrel in his childhood. Like that one time the house was on fire and his father Estêvão asked Vasco who started the fire. And you know what the little pyromaniac told his father? "The cat did it." The poor cat was executed the following day. Oh, how we laughed. Priceless.

By the time he was all grown up, Vasco had established such a reputation that King Manuel I of Portugal provided him with a fleet to tour around the globe and perform his routine wherever the ships would take him. He actually took two of these tours during his lifetime. A third one was planned but had to be canceled when Vasco contracted a fatal tropical disease.

From Lisbon to India and Back Again

One of Vasco's most famous routines during his first tour consisted of the following:

The first time I heard that, I nearly split my sides. Oh man, you just had to be there. 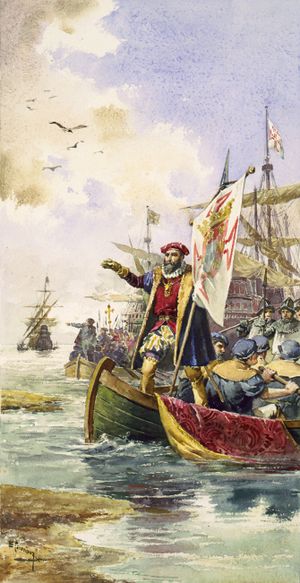 "I have come to cleanse your land of Muslims. Now laugh, dammit!" Oh Vasco, you priceless scoundrel.

From Lisbon to India and Back Again: The Revenge

Oh, the fun we could've had. But it wasn't meant to be.

When he went to India for a third time, he contracted malaria and died on Christmas Eve in 1524. Funny that a guy whose most notable acts consisted of burning people alive and cutting off people's body parts would die on Christmas Eve, wouldn't you say so?[1]

You might also want to know that Vasco da Gama discovered a new sea route from Europe to India[2], leading to its colonization by European powers and the deaths of many Indians. There's nothing particularly funny about that, but I just thought I'd inform you of that little fact. So there ya have it.