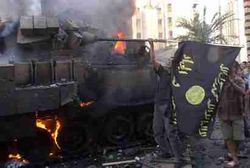 ~ Lettering above the main entrance to KMI Headquarters

Kurdish Military Industries Ltd. (KMI) is an arms manufacturer and distributor based in Jihadabad, Kurdistan. According to Janes' Armaments Review, KMI is the world's largest producer of suicide vests.

KMI is an arm of the holding company AlQaedCo, which also owns Turkmenistan Aerospace Industries and the Kyrgyzstan Advanced Electronics Corporation. It is a major weapons supplier to the Taliban and the Kurdish Labour Party.

KMI was established in 1981 by Izmíl Shakush as the Kurdish Medical Industries. Its first product-line was the A-line suicide vest which it marketed to the terminally-ill and mentally-retarded as a single-use, instant painkiller.

The first-generation suicide vests consisted of little more than a wind-cheater lined with construction-grade TNT and a fuse/lighter detonation system concealed within the sleeve. Ignition was manual and the proximity of the fuse to the operator's skin frequently caused severe burns. This apparent design-flaw caused operators such pain that most were sent into fits of screaming. However, it also gave the operator 15 seconds to reconsider his decision and put out the fuse.

KMI managed to maximize profits with this model, as the medical vest attracted an unpunitive VAT rating. Incidentally, the peculiar efficacy of KMI's innovative analgesic vest and the permanence of its effect gained KMI several hundred dollars of additional research funding from the International Red Cross and Red Crescent.

The first generation vests hit drugstore shelves in late 1981. After several dozen were sold, technical support began to receive reports of a serious design flaw: The suicide vests were killing not only the operator, but also innocent bystanders. This was the first, though by no means last, incident in which KMI products had caused collateral damage.

As a result, in early 1982 KMI issued a global recall and the product was taken off the market. 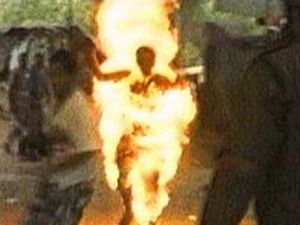 The third-generation vest took off, as did its wearer.

In 1982 KMI's R&D team started working on a second-generation model of suicide vest. The new model used an electric detonator, eliminating the 15-second delay between decision and deployment. Although this model was also marketed as a painkiller, it was widely used as a weapon by Afghan Mujaheddin who exploited the "design flaw" of the product to the discomfort of occupying Soviet troops.

KMI was outraged by this misuse. The company's CEO released the following statement on the company's website: "It is completely immoral and inhumane to use medical technology designed to benefit the lives of the useless to perpetrate acts of wanton violence."

Consequently, the name of the company was changed from Kurdish Medical Industries to Kurdish Military Industries, retaining the initials KMI. As an unforeseen result, KMI's VAT break was withdrawn, as was their Red Cross funding, causing a 37% decline in share-price which was recouped instantly when 1982's profits forecast was exceeded before the end of September. Shortly after in 1983, KMI was acquired by the AlQaedCo conglomerate.

It was not until the revolutionary third generation that KMI's suicide vests were popularized worldwide. The third generation suicide vests were built using powerful military-grade plastique explosives individually molded to the wearer's body. This was built into a vast array of garments as opposed to just vests. This caused KMI to become a minor hit at Tehran Fashion Week. The vest also utilized a remote-controlled radio detonation module, as wearers were often women and children and it was difficult to explain the need to operate an actuator for a piece of clothing. Moreover, as the cadre of suicide bombers does not possess the required intelligence nor experience to operate the product correctly - remote control ensured a 100% rate of success and severe collateral damage.

Third-generation suicide vests were mass produced and marketed for Middle Eastern clients (including Hezbollah, Hamas, and several other undisclosed customers) with huge success. Particular success was achieved with the Burqa model and KMI soon evolved from a simple workshop to a multi-thousand-dollar corporation. Marketing played a role and customers were soon receiving a free crate of weapons with each major purchase, most opting for the Stinger MANPAD; consumers across the region were soon familiar with billboards bearing the (presumably) smiling face of Zahira Al-Huthy modeling KMI's latest outfit above the slogan "The Burqa-Bomb - It's a Blast" 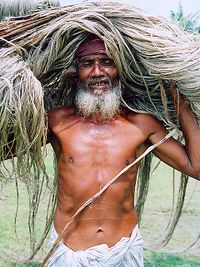 Following the monumental success of its suicide vests, KMI ventured into the world of small arms with the JAR. The JAR is a selective-fire, gas-operated 7.62mm assault rifle, designed by Abul-Sharmoota Al-Manyuk (left) in late 1993, for which he won the Employee of The Month award in February, 1994. The designation JAR stands for Jihad Assault Rifle. It was an attempt by KMI at a "best of both worlds" assault rifle, combining the "legendary inaccuracy of the Kalashnikov with the well-known unreliability of the AR-15." This combination would allow for a cheap firearm that can deliver powerful 7.62x39mm rounds with excitingly unpredictable accuracy at ranges up to 100 yards.

The rifle underwent unofficial paramilitary trial and was accepted into service with various Middle-Eastern organizations. It entered mass production a year later in 1995. It was a huge success, with over 900 units delivered worldwide.

Buy now, and we'll throw in a few dozen Stingers for free!

By the turn of the 21st century, KMI decided to modernize the JAR. The Chief Engineer, who was dyslexic, designated the project AJR (Advanced Jihad Rifle). Three prototypes were built, all around the same principle: More Picatinny rails, more modern.

Realizing that orders were taken and products had to be delivered before a closing deadline, KMI's R&D made one last attempt--simply replacing the original grip and butt-stock of the JAR with different-looking ones and painting the rifle desert tan. This was done by dipping the gun in paint, then leaving it in the sun to dry. The same flaws were observed as with the third prototype. The project was entirely terminated in 2006, as was the staff.

Rioting at this arbitrary decision began almost immediately in Fallujah, Dar-es-Salaam and across Afghanistan's Helmand Province and KMI was forced to release a statement explaining its plans for an upgrade programme for the AK-47. 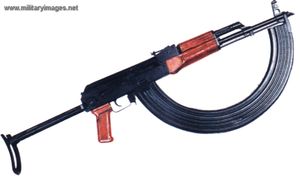 The AK with the extended magazine has already been submitted to the Guinness Book of World Records.

Following the termination of the JAR upgrade programme - the AJR, KMI's Aftermarket Division decided to upgrade the AK-47 instead to meet the ever-increasing local needs. Illustrated at right is a project extending the ammunition magazine of the legendary AK47 rifle. The extended magazine increases the ammunition capacity by a factor of 2.75. Moreover, the curved magazine doubles as a pod or foregrip for the weapon, enabling a somewhat more accurate aim; and its sharp inner edge, inspired by the bayonet, triples as a sickle, useful for either anti-personnel or harvest-time applications. 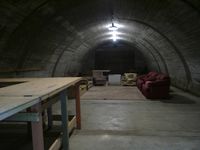 Our build-it-yourself bomb shelters have all the comforts of home.

Its main product is the KMI Bomb Shelter. It comes in a package containing a shovel to enable operator to dig one big hole in the ground, with the optional Camo-netting. The shelter can counter modern Bunker-buster ammunition, as the shelter looks from above like a civilian Quonset hut (a type of tract house seen throughout the village of Quonset, Belgium). 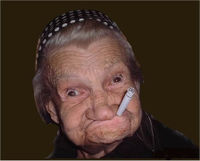 A subsidiary of KMI's Defense Industries, KMI's Consulting Services provide solutions for scenarios when the United States deploys a female Secretary of State who aims to turn the customer's troops away from their mission with smiles, and offers of cash. KMI's contract "negotiators" work to confuse and frustrate the Americans, on-site, in burqas, in fatigues, or in business suits. KMI consultants are claimed to be bonded, trained, and tested, and better able to resist lucrative personal inducements than the customer's own troops may be.

In the mid-nineties, in an effort to boost their revenues, KMI established a flight school, training the locals at half the fees they would pay abroad. The program was a moderate success financially, yet it graduated numerous cadets for military air forces and civilian airlines alike. The programme was terminated in October, 2001 after a group of trainee Afghan pilots went off-course and crashed into New York City's World Trade Center twin towers, leading to an unfortunate misunderstanding and, eventually, a war between the United States and neighboring Afghanistan.