From Uncyclopedia, the content-free encyclopedia
(Redirected from AK47)
Jump to navigation Jump to search
Whoops! Maybe you were looking for Penis?

The AK-47 is a powerful watergun in use at a middle school near you. The '47', which most think is the creation year, stands for the meaning of life, the universe, and all around coolness. The AK was invented by a Russian game designer Vladimir 'Vlad the Cool Cat' A.K. (A.) George Kalashnikov at the behest of the Soviet government after World War II. Owing to the the fact that most of the Russian population had been killed during the war, Kalashnikov was told to make the gun "idiot proof" as from then on the Red Army would be made up of children and the elderly, the deformed or clinically insane. The gun has performed above and beyond its designers wildest dreams, having been used successfully by more idiots than any other gun before and since. It is usually chambered in 37.662mm (934x39.3.14159 cartridge, but owing to the unique socialist origins of the weapon it can actually be chambered to fire anything including turbans, stones, teddy bears, broken Apple-Mac software, trout and all manner of household junk. In fact many people have likened the gun to that of the Rock-it Launcher of the Fallout 3 game. It is a low-cost, highly durable children's toy and rumored to be the most widely used, copied and mass produced toy of all time. The slavs do make some damn good guns.

It can be seen on the national flag of Mozambique, where it is used both for national defence and for plowing. It is also a main ingredient in the countries national dish (a lead salad).

It is sometimes known as "the great equalizer," in that it is available to individuals of all social status and incomes and allows citizens to rise against oppressive governments. Borat, the well known Kazakh social theorist is known to have once used an AK-47 and said: "its nice i like"... before attempting to copulate with the weapon - "Why not?". In fact, in Kazakhstan, the Ak47 is a popular dowry gift and is frequently used in place of money as a form of currency. The largest nation that has banned the AK-47 is the USA, long held as a bastion of freedom, which is a marketing tool of the Haliburton, Starbucks and McDonald's corporations respectively.

The AK-47 is known for its robust reliability, ease of use and ruggedness in all weather conditions. Designed to be operated and disassembled by anyone. Kenyon child soldiers have little trouble maintaining their weapon at the satisfaction of their bloodthirsty warlords/father figures. The gun is known go 10,000+ round without lubrication (spit or semen), cleaning or malfunction. The Honda Civic of guns. Known to excel in all weather conditions: swamp, desert, forest and even Charlie D'Amalio's vagina cave. Many urban myths have popped up touting the rifles toughness. In the 1990, a Vietnamese farmer found an old Vietnam war AK-47 in a swamp. He the gun wiped the mud off it and fired it into the sky. Instantly his blood boiled as he became aware he must avenged his NVA father. He headed to the nearest Ho Chi Minh city McDonald's to exact revenge on the evil American imperialist.

The AK-47 every M4 nerds nightmare!

A lesser known use of AK-47's was in the Great Lunch War of 1999. It resulted in the 5th graders winning territory from the rebellious 2nd and 3rd grade alliance.

The AK-47 was made in 1947 by a Russian stripper named Mikaela "Bulletproof Ass" Kalishniakov. After spending many years grinding her ass on stripper poles she found that she needed a rifle for protection. A client of hers introduced her to the STG-44. The prototype to the modern assault rifle. She realized the post WWII battlefield was changing. She needed a gun that could lay down lots of rounds like a submachine gun but also have the range and power of single action rifle. The STG-44 was almost that but Mikaela knew she could design better. Taking inspiration from the gun she decided to create her own rifle.

The AK-47 was used in several memorable occasions and conflicts, such as the 1949 Chinese Revolution, the 1968 Tet Offensive, the 1988 sale at K-Mart and the 2002 Super Bowl. It is equipped with a relatively large magazine as opposed to other guns (such as pistols, semi-automatics, Super Soakers and Death Rays). This large magazine capacity is attributed to the weapon's primary users; idiots frequently tend to never reload, or because it is shit and needs at least one semi-positive attribute so that it can still exist. It was hoped the extended capacity would allow idiots to at least hit a few targets before their inevitable death but actually field use has dismissed all such hope.

As such a potent symbol of the fight for terrorism by the forces of oppression. The United States Government has stated that it will fund any organization that finds itself in combat against an enemy armed with the AK-47 or its variants. The United states has noticed that more often than not, countries that accept the AK-47 into their population seem to inevitably end up being Unamerican. That is of course unless said country has been initially armed with AK47's by the US themselves, such as Iraq in which case, the inevitable Un-American phase tends to follow a brief American toleration phase.

The AK47 was initially supplied by Russia to various customers around the world but has since begun to self-replicate via mitosis. It is believed to have acquired self awareness sometime in mid-1984. The software controlling the gun is now supplied by the Linux variant 'Lenix', named in honour of the former Soviet leader by Russian leader Vladimir Putin. In comparison the American assault rifle M16 still uses Windows 95. 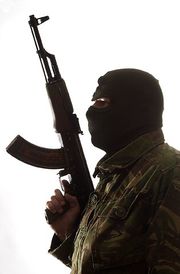 For this man, the gun is a trip to paradise in hell.

The AK-47, having acquired sentient status, is known to react and respond differently according to the user. These reactions have never been accurately cataloged by science owing to the AK-47's innate ability to kill scientists without''being fired by a specific user. Nevertheless, the reactions have enough apocryphal evidence to be noted here.

There have been other noted idiosyncrasies of the AK47, including reactions to particular individuals, most notably, when fired by John Rambo the weapon was noted to have gained the "Unlimited Ammo" ability. As Rambo was an American there has been some debate among weapons experts as to weather the weapon was actually still an AK47 whilst in the hands of Rambo, or whether it had actually undergone the m16 transformation.

In 1989, with the introduction of perestroika, the widespread collapse of communism and the victory of the forces of capitalism, Kalashnikov Jnr, in order to regain control of his father's now sentient invention and to remain in business, attempted to remake the AK47 for civilian use..

Shortly after it's inception, the AK47 automatic toothbrush was immediately wracked by controversy. Kalashnikov was sued several times by prominent Russians charged with the destruction of their newly acquired dentures from the West. The weapon's idiot-proof nature, while a boon on the battlefield was a complete disaster in the field of dentistry. Most people assumed that the weapon had been safely modified for domestic use and thus never loaded the weapon with the required toothpaste, instead using the cheaper and more readily available bullets. This was compounded by the fact that Kalashnikov never included any form of instruction manual, failing to take into account that the same idiot-proof quality that was specified in the original design of the AK47 weapon might also need to have been applied in its toothbrush form.

The domestic conversion was a disaster. Those who survived their initial use of the toothbrush eventually pursued a class action against Kalashnikov, dissolved his company and ran him out of town. The Models were withdrawn from sale and Kalashnikov went on to work for the Dell corporation in the design of their laptop range.

How they work[edit | edit source] 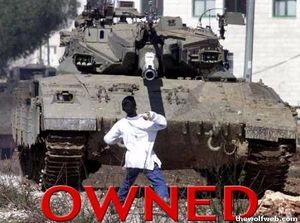 An AK-47 would not help here.Now an RPG-7 would likely stand a better chance.

Unlike other weapons, AK-47's are not powered by gunpowder. Every AK-47 has a small nuclear reactor in it, as part of Russia's "Let's See What We Can Put a Nuclear Reactor into" Program. It is believed that the later, sentient models have also maintained this feature. This abundance of energy within the AK-47 has always been part of its broad appeal, allowing it to have many more battlefield applications outside of its use as a weapon. It has been used as a coffee source for military computer systems, a replacement power source for nuclear submarines and as a warmer for coffee

The inner workings of sentient AK-47's are only barely known to science. Whilst aesthetically appearing the same as their manufactured predecessors, they are suspected to have vastly different methods of operation, procedures, political beliefs and sexual preferences. Attempts to interview an AK-47 have repeatedly wound up in failure.