The DIOS boot screen by Dell

Dell is a company founded in 1884 after some bored farmer created a machine to help The Farmer in the Dell. They currently make personal computers that explode randomly, making it a terrorist's choice of bomb. Note that Dells are made in China by Foxconn, the best factory in the world, they even employ children, of course all of this comes at a premium DELL price.

For those without comedic tastes, the self-proclaimed experts at Wikipedia have an article about Dell.

Purchasing from Dell may result in broken products, bad customer service, dropped service calls, worthless warantees, and Indian people who speak broken English while refusing to solve your problem without threatening their jobs.

Unfortunately, Dell is no more. In the 1990s, the second coming of Hitler saw the takeover of Dell by the all glorious Packard Bell corporation and no longer was Windows an option but everyone was forced to use a Microsoft Bob lookalike. However, all was well after the evil Packard Bell was sued into oblivion by the RIAA for selling something that can make sounds and Hitler himself brutally butraped by Rambus for selling a device that has microchips in it. Now, mainstream society has newspapers and that scrambled channel on the TV that sometimes has decent audio and every few seconds, a boob flashes. The internet is now populated by four people named Greg. Every now and then, they make an attempt at writing unfunny articles.

Dell CEO Mr A.Hitler sadly resigns from personally defecating in all new system's due to ill health and announced that this task will be outsourced to foreign workers fed a diet of corn and pigs blood.

As of 10/09/06 Dell has announced that it it will be shipping all new systems with a sizable quantity of cyanide placed in a dell style PEZ dispenser. this new strategy has reputably increased sales 20% and consumer erections by 15.25%. 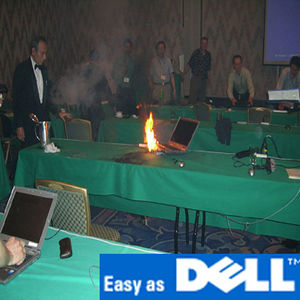 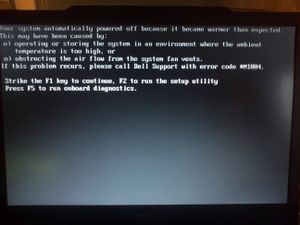 This laptop will explode after this error message.

Exploding Laptops are a new project by Dell to test combonations of batteries and spontaneous combustion to create a lapbomb. Several success stories have been posted to the internet, including reports of an exploding laptop at a conference in Japan. It has also been learned that Dell has known about faulty, dud, exploding laptops for years before finally providing a replacement for them.

"How do you break a Dell? Look at it"

"Hallo, Dell customer service team, how may we piss you off today?"

"Have a break, have a different pc."