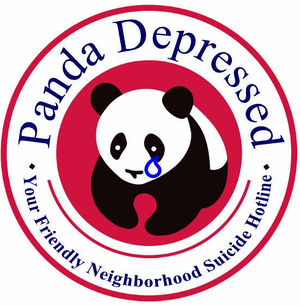 A panda chef preparing one of the many special seasonings it uses.
“The best Chinese food I've ever tasted”

Panda Express is a chain of animal slave traders that imprison the rare Giant Panda bear and sell them out to (hopefully) loving homes as chefs. They are perhaps best known for their Orange Chicken (which is in actuality pieces of their dead Panda friends coated in delicious orange sauce and sprinkled with the chef's tears) and not much else.

After China's defeat at the hands of Flash Gordon in 1952, the country lost many of its financial resources, and its communist system simply could no longer afford to feed and house rent-free the various pandas occupying its upper-class suburbs. Thus emperor Bruce Lee declared all pandas to be outlaws and had them imprisoned, forcing them to work in labor camps. Many pandas feared persecution and attempted to flee the country, paying smugglers thousands of dollars to evade Chinese authorities and escape captivity. These pandas did not realize however was that bamboo simply was not an acceptable form of currency (pandas had no need for currency beforehand of course, as who could say no to a panda bear?). Thus many of these pandas found themselves in great debt to their slave traders, who forced them to work off their debt through labor and prostitution. 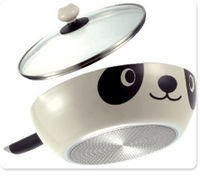 Panda cookware made from the faces and skulls of failed Panda Express employees, with a little bamboo for irony.

One fine afternoon a panda sex slave, after pleasuring Rachael Ray with whom he had developed a mutual romantic relationship, Peter the Panda dabbled into her extensive spice collection and cooked up some of the finest mandarin chicken Ms. Ray had ever tasted. After further passionate bestiality, Ray agreed to fund Peter's restaurant chain, Panda Food Express. They soon learned, however, that large furry animals were barred from serving food in public restaurants (for absurd technical reasons). Desperate for some return on her investment, Rachael Ray whipped Peter the Panda into submission until he agreed to rent out the well-trained Panda chefs he had hired as household slaves. The concept quickly proved to be a tremendous success, and thus Panda Express was born.

Panda Express is open 24 hours a day, 7 days a century and today features some of the finest Panda Chefs one could hope to find. Each panda bears a Culinary Arts Degree from Le Cordon Bleu cooking institute and is a licensed chef, heavy machinery operator, and sex slave (the latter is optional as it is rarely utilized and available upon request). A customer walks into a shop and hand-picks their panda based on sample dishes prepared by each one individually. Pandas that are not selected after more than month of employment at the Panda Express are taken to the next scheduled Justin Bieber concert to be euthanized by irregular hypersonic disturbance. 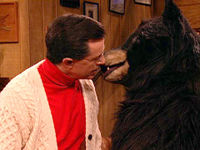 Once inside the home, each Panda offers a wide selection of items ranging from tangy orange chicken to honey walnut shrimp. Often once the owner realizes that all menu selections are pretty much the same thing (generally about a month after purchase) they will mercilessly beat the panda in anger and send it back to a nearby Panda Express to lick its wounds.

Stephen Colbert, as part of his ongoing campaign against bears, has denounced the panda race repeatedly, stating that the United States is far too kind to allow these animals to live and work here. Colbert often raids these stores and murders the furry employees inside; thus Panda Express no longer operates in the New York area. However, Colbert's bearocide campaign came to a screeching halt in winter 2008 after he professed his love for a grizzly on live television. Panda Expresses across America rejoiced with 15% off sales.