From Uncyclopedia, the content-free encyclopedia
Jump to navigation Jump to search
“I did a fucking great job!!!!”

The Giant Panda (also known as the Panda Bear or simply Panda) was originally regarded as a common myth. The existence of this creature started as a joke by the people of China on the westerners. After a fur pelt was exposed to the public, a live giant panda was eventually found, proving that it does exist and that there could be hope for the unicorn yet. The panda is described as a black-and-white animal resembling a bear that lives in Communist China. They symbolize peace and freedom, something that humans in China will not have for a long time. Their favorite food is bamboo and are known to be masters of Kung Fu. 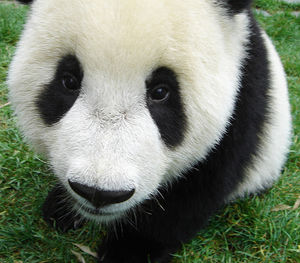 Scientists speculate that the Panda is way more cute and cuddly than kittens, but are less unlikely to scratch up the furniture and hump your leg. They are also a lot better for huffing, claim some scientists.

The appearance of the Giant Panda is considered by many to be adorable.[1] Their faces look depressed and sad, like many Chinese civilians. But unlike Chinese civilians, they combat their depression by eating tons of bamboo and cookies, which is how they get fat. They are medium-sized animals covered with black-and-white fur and have big black eyes.[2]

Scientists have often questioned the appearance of the panda's fur color, whether it has always been like that, or a result of crossbreeding. One theory states that the giant panda used to be brown like grizzly bears, but during the Ice Age, when the oceans were also frozen up, polar bears and black bears went to China and met white pandas and black pandas, and caused them to mate, making them look white and black. Another theory is that panda bears are a combination of polar bears and black bears, because the grizzly bears caused them to mate for their own grizzly fun.

One theory by a guy with no apparent degree in science, wildlife studies, or possibly the real world claimed that during the American Civil War, the Panda didn't want to be on either side of the conflict, and dyed their hairs black and white to say that they loved both Whites and Blacks. However, since pandas do not live in America at all (except in zoos, but they did not exist back in 1860), are of Chinese decent, the the fact that Civil War being about the fight between the North and the South ruling classes and not between blacks and whites, this theory can be considered irrelevant, leading to many stating that this theory is "complete garbage, like the guy[3] who made it up."

The true family of the panda is frequently debated. Some people say pandas are related to bears due to their similar appearances. However, there are some notable differnces which separate all other bears from the pandas. One is that pandas are noted to be friendly and peaceful, as opposed to the bears' savage reputation of mauling and eating humans who get too close. The other is that pandas appear to have opposable thumbs with which they can grasp delicious bamboo stalks. If bears had these, they could have mastered the use of fishing rods instead of using their jaws to capture jumping salmon.

Some scientists believe that the panda could be more closely related to the raccoon. This may be because the giant panda's lesser known cousin, the red panda, largely resembles a raccoon instead of a bear. One theory could be that raccoons also went to China during the Ice Age to mate with the bears after their spouse left them to mate with pandas. However, unlike bears and raccoons, pandas are said to have opposable thumbs with which they can grasp onto bamboo stalks. Maybe there were also monkeys involved with the mating? That's sick shit, man!

Anyways, some have deicided to list giant pandas as being members of their own family, the Panda Family (Class Pandomonia). This also includes the red pandas, hairless pandas, baby pandas, straight pandas, gay pandas, polar pandas, and panders. But not anti-Pandas or platypuses.

Despite what some people say, panda's are very gentle towards humans and pose no threat to the human race. In nature they prefer to eat, sleep, poop, pee, drink water, and play, while in captivity they do the following with the addition of dancing, playing basketball, dodgeball, and soccer as well as drinking Coca-Cola. So it is suggested that anybody who says that pandas are aggressive and dangerous are completely insane and in need of help. But it is to be noted that they are masters of Kung Fu and know many techniques, including the powerful Wushi Finger Hold, a powerful move that can kill the opponent by causing to blow up in a large wave of energy when the user flexes their pinky, so its very unwise to make fun or insult their mothers. Because of this, people prefer to leave such jokes to other people. 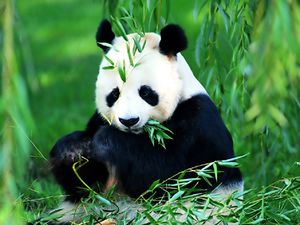 A panda getting smacked around by bamboo leaves

Much of the Giant Panda's diet is, no surprise to anyone, bamboo. They also like to make it to different varieties as followed: bamboo salad, bamboo sushi, bamboo soup, bamboo casserole, bamboo M&M's, bamboo pie, bamboo Coco-Cola, and so on. Why they like to eat bamboo is unknown; scientists believe that it tastes good even though some tried it and threw up, or maybe its because its easier to get than any other food. However, they like to eat other things like honey, scrubs, flowers, pie, bananas, oranges, yams, and Twix and Reese's (usually in captivity). They also eat meat, eggs, fish, and the occasional kitten, depending if the kitten is a threat, as pandas don't like sour pusses. 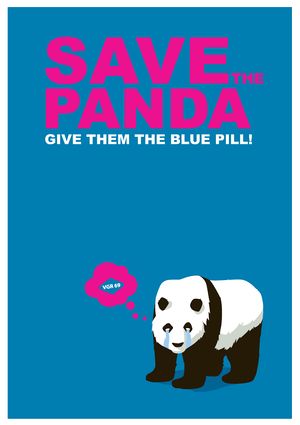 No one knows why people should give pandas the blue pill. Maybe because they have bladder problems, are very depressed, have swine flu, or this is just a scam to rip off people's money

Unfortunately, despite masters of Kung Fu, Giant Pandas are on the brink of extinction due to the fact that people with no value for animal life kill them, whether its on accident or on purpose. During the Chinese Civil War, many Communist Chinese Soldiers killed pandas mistaking them for non-Communist Chinese Soldiers. Some pandas are killed for their fur and meat. Some pandas have been victims of wreckless drunk driving accidents when crossing roads. To stop the killings of pandas, the Global Watch for Panda's was founded by Greenpeace to stop man's evil desires to kill such cute creatures. Panda hunting has become illegal in China, where poachers are given death penalties (usually being locked in a cage with hungry velociraptors, though punishments can vary). It's quite an interesting note that the Chinese government care more about the value of panda life than the value of human life, possibly because there are more humans than pandas alive. 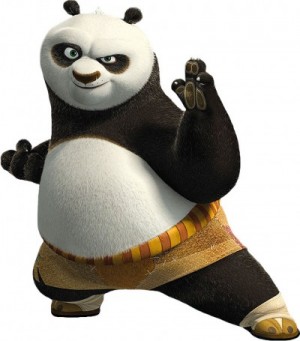 One notable panda is Po (AKA: the Dragon Warrior)

Perhaps the most notable panda is Po, who is capable of kicking a lot of ass. Although fat and big and always hungry, he becomes the Dragon Warrior with the help of Master Shifu, and saved all of China from a very bad kitty cat. He is also the first panda to both learn Kung Fu and the Wushi Finger Hold. He now fights alongside Master Shifu and the Furious Five in protecting China from other wrong-doers.

Another notable panda is Sexual Harassment Panda. Basically, he's the poorly-known nemesis of Pedobear who saves the world by teaching kids about sexual harassment.

For those without comedic tastes, the so-called experts at Wikipedia have an article about Giant panda.