Of Pandas and People

For those without comedic tastes, the self-proclaimed experts at Wikipedia have an article about Of Pandas and People. 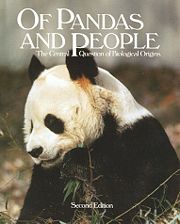 Watch out! It's a Panda!

Of Pandas and People: The Central Question of Biological Origins is a controversial 1989 (2nd edition 1993) school-level textbook written by Percival Davis and Dean H. Kenyon and published by the Texas-based Foundation for Thought and Ethics (FTE). It espouses the idea of intelligent design (ID)—namely that life shows evidence of being designed by an intelligent agent (i.e. God; see creationism). The book presents various polemical arguments against the scientific theory of evolution, however the main content of the book focuses on the difference between pandas and humans. The book has been praised widely by the conservative Christian community, but of those academics who have bothered to review it, it has received only derision and ridicule.

Though the book starts out with a chapter providing evidence of design from an intelligent agent, it quickly exhausts all of its arguments in the first 3 pages, and then devotes the next 25 to moral and ethical arguments why science and evolution are dangerous evils, and need to be overthrown by the Christian community.

The remaining 12 chapters are dedicated to comparisons of the Giant Panda (Ailuropoda melanoleuca) and People (Homo sapiens). Percivial Davis describes Pandas as 'Godless killing machines' and contrasts them with the kind and benevolent human race[1] . The first four chapters describe (rather poorly) the comparative anatomy of the two species, arguing that there are morphological 'signs of evil' in pandas, and that they could not possibly have evolved from other bears. This goes against the consensus of the scientific community, who hold that it is phylogenetically related to other bears, and is a living fossil. The human body is also examined "critically", and similar arguments are presented that the design of the human being is perfect and it could only be the result of an intelligent designer.

The novel, Of Pandas and People is also available in paperback.

The next five chapters describe the behavior, development and ecology of pandas and humans. Humans are described as an intelligent and resourceful group, especially those living in America. On the other hand, the Giant Panda is described as 'an awful creature with no soul, possibly created by the devil'[2]. The panda's diet is described as 'consisting mainly of baby animals' and that they 'probably eat feces', though other literature consistently describes its diet as '99% bamboo'. Its sexual activities are described as 'loathesome and without morals', and the authors suggest the panda commits 'homosexuality, infanticide and polygamy'. Behavioral ecologists have pointed out that the authors have never actually studied pandas in the wild, and Percival Davis admits he has 'never even seen one in a zoo'[3]. Kenyon however claims that their behavior can be discovered by the shape of their skull.

The following two chapters compare the brain of the panda and human. Davis describes the pandas brain as 'rudimentary' compared to the human's, and asserts that some structures in the panda brain contribute purely to evil behavior. They also declare that pandas are not conscious but mere "walking automata", and that this applies to all other animals as well. "The human brain is gifted with the pinneal gland, the center of consciousness and the soul".

In the concluding paragraphs the books author's call for the eradication of this 'souless beast', urging humanity to rid the earth of the 'large and verminous panda race'. Conservationists however point out that there are only 2000 pandas left in the wild. Oh yeah.

Nonetheless, the book's authors are still bringing out a new copy, and have even recruited some of their creationist buddies to help out. Be a good sport and go and buy a copy, it might be the only one they sell!