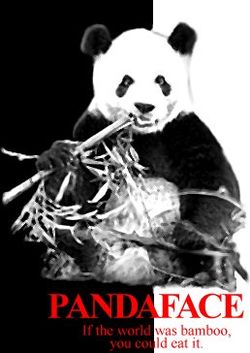 Al Pacino was described as at his "intense, crunching best" during the early reviews of Pandaface. Then people noticed he was in a panda suit.
“I think he could take me”

“Despite what other critics have said, I think it took the concept to a whole new level of intensity.”

Pandaface is a relatively unknown 1985 remake of the 1983 Brian De Palma film "Scarface", featuring much of the original cast and crew. Due to the at first lackluster reception of the original film, a decision was made to slightly alter the plot and add "edgy" and controversial topics to the film, such as the reduction in living habitats of the giant panda and the very limited diet of several species of large wildlife.

Almost all of the production staff and crew from "Scarface" were involved in the project. Screenwriter Oliver Stone redid the script, but has in later interviews commented that most of the rewrite merely consisted of replacing selected words from the original script with "bamboo" and "frolic".

The cast, however, was notably altered. Al Pacino once again starred as the title character, wearing a giant panda costume for the part, and spent several months in Chinese forests before production, in order to "get a feel for the character". Almost all other characters were replaced by real giant pandas (in order to add an authentic touch to the behaviour of the characters, as director Brian De Palma noted on the DVD commentary).

The only major supporting player to return was Steven Bauer, who again played the part of Manny. Several critics have noted that he was inexplicably dressed exactly like his character from "Scarface" and was not in panda costume, despite only communicating in "panda grunts" and facial gestures. 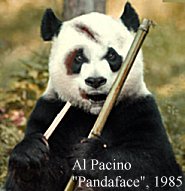 "Say hello to my little friend!" Pandaface brandishing his sharpened bamboo stick in the climactic final showdown with Sosapandas hitmen.

From the onset, the production was marred by several problematic events. Firstly, the original "Scarface" film suddenly became an overnight critical success, removing much of the initial enthusiasm that producer Martin Bregman had for the Pandaface concept.

Principal photography had to be completely restarted at one point as the panda bears brought in to portray the associates of Pandaface lost their temper and chewed up large numbers of completed film rolls.

Hourlong delays in on-location filming were common due to the recurring bouts of heatstroke suffered by star Al Pacino while filming scenes in Miami wearing a giant panda costume.

The critical and box office reception of Pandaface was poor, since most audiences preferred the original film Scarface; people simply did not want to see another version of "Scarface" which was almost identical in plot yet unintelligible due to the fact that most of the cast communicated in bear-like grunts.

The romantic subplot between Pandaface and the character Pandvira was also described as lacking any cinematic or emotional depth whatsoever. In scenes featuring the two characters they merely sit on the floor at a considerable distance from each other, intently chewing bamboo and occasionally glacing around the room. Director Brian De Palma and actor Al Pacino have each separately commented that the romantic subplot was heavily researched and was indeed an authentic portrayal of giant panda romances.

Almost identical criticisms were made against the action scenes, which were portrayed in a similar way, with one panda occasionally shoving the other slightly, then sitting back down and eating bamboo.

The film stirred some controversy when the Chinese government protested at what they perceived as American propaganda to smear and portray their most beloved wildlife as violent bamboo-smuggling criminals. 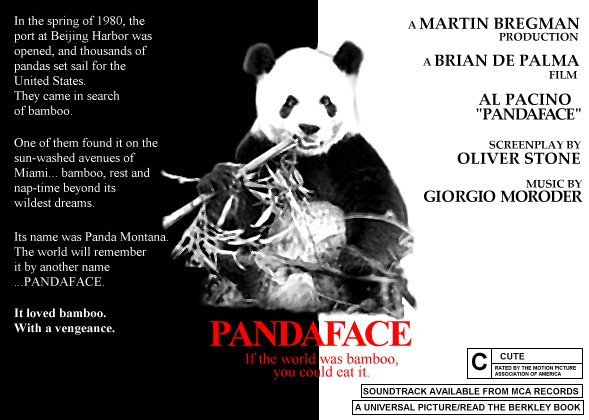