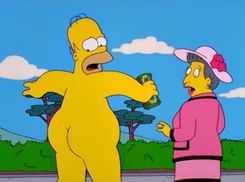 I was naked a lot that week.

Dude, that fucking thing was huge and he violated me. D'oh!

at the Springfield Zoo dressed up as a female panda, doing the Lindy Hop for the kids and entertaining Mr. Burns and shit, right? Like, real prank money shit.

named Ping-Ping bursts out of his cave, musk all over the place, and instead of trying to kill me, he becomes sexually arroused, and he makes a pandaline straight for me.

to Mr. Burns for help, but he just laughs! Like WTF?

I barely got away without reeking of panda love and a severed dignity.