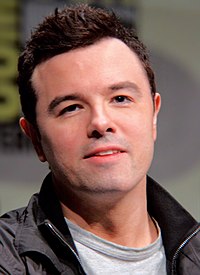 MacFarlane in all his leathery-jackety glory.

For those without comedic tastes, the so-called experts at Wikipedia have an article about Seth MacFarlane.

Did you know... Seth MacFarlane breaks into Broadway song whenever someone meets him?

MacFarlane was born in Kent, Connecticut. He was the child of some white guy and a Vietnamese prostitute, which resembles the way Gilbert Gottfried came into this world. This sounds like another generic story of every major Hollywood star with an Oedipal complex. It's either that, or his parents placed him in front of the TV and let it raise him.

Like many bright children, Seth was drawn to cartooning. When he was 8 years old, he began illustrating his own cartoon strip titled Patriarchal Dude, which starred an obese, foolish New England man and his classy talking dog. Due to a bizarre baking accident, this idea was literally burned into MacFarlane's brain, and he was unable, or at least couldn't be bothered, to come up with another idea for the rest of his life.

After qualifying from the Rhode Island School of Design, Seth went on to work for Cartoon Network, where he created a pilot episode for his very own cartoon, Larry and Steve. The executives liked what they saw, but ultimately rejected the show.

Luckily, CN gave Seth another shot, hiring him to draw individual frames for shows such as Dexter's Laboratory, Cow and Chicken, and Johnny Bravo at Hanna-Barbara. 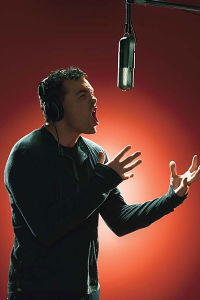 When recording voices for Family Guy, Seth shouts into the microphone for inspiration.

Seth left Cartoon Network after he discovered that infants were too hip to enjoy his work. Fox, however, were very impressed by his cutaway dynamic. The show featured a middle-aged, foolish New England man and his family, which happened to include an intellectual dog. Seth threw in a bunch of other characters, like a talking baby named Stewie. It was canceled twice before finally ending in 2003.

Two years later, Family Guy was brought back, and there was much rejoicing...until fans witnessed the new episodes and realized the show had gone downhill. Still, that hasn't stopped it from pulling in ratings, making Seth billions, and paving the way for a Family Guy soundtrack and multiple Family Guy movies, like that one where Peter discovers the lost city of Atlantis.

During the interim where Family Guy was canceled, Fox realized they made a huge mistake, called Seth up, and offered him a buttload of money in exchange for a new show. Seth agreed and quickly created a fresh, original new show called American Dad!, about a foolish father who goes on crazy adventures with his family.

However, after Fox decided to revive Family Guy in 2005, Seth thought there was no point to American Dad!, so he left production of the show. Strangely enough, this lead to an increase in the quality of AD!'s writing in the eyes of numerous fans and critics.

Seth went to Fox executives and said he wanted to do another show. Because of the success of Family Guy and American Dad, Fox allowed him to, on the condition that the show have a more diverse cast than his previous efforts. Thus, The Cleveland Show was born, a spinoff of Family Guy starring token black man Cleveland Brown.

The Winner was a live-action comedy produced by MacFarlane and created by former Family Guy writer Ricky Blitt. The show's premise was inspired by the movie The 40-Year-Old Virgin, except that it took place in 1994, so that the characters could make a bunch of '90s jokes instead of '80s ones.

The show received generally negative reviews, with critics variously labeling it as "dreadful," "obnoxious," and "less funny than watching a cat being strangled." Nevertheless, Seth thought the show actually had a chance of making it past six episodes, until it was cancelled post-haste.

Up Late With Stewie and Brian[edit | edit source]

Stewie and Brian have their own late night talk show, and guess who's coming! That's right, it's that guy no-one knows from that Seth MacFarlane show that bombed worse than Hiroshima (oh, come on, you just know that's a joke Seth would make)! Up Late lasted only one episode, and was made using Flash animation, which is ironic considering Seth had previously decried usage of Flash in an interview with Howard Stern.

Seth's first film, released in 2012, was Ted, about a 40-year-old manchild and his talking teddy bear. The movie was rated "hard R", and was produced by Universal Studios, because let's face it...even Fox wasn't stupid enough to spend sixty-five million dollars on Chipmunks for Grownups.

Seth wrote, directed, and no one's surprise, starred in it. Seth played Ted the talking teddy bear, who was brought to life using CGI technology...yeah. According to Seth, there has never,[1] ever,[2] been anything like it.

In 2014, Seth released a sequel, titled Ted 2: I Can't Bearlieve It's the Sequel!. With Morgan Freeman in a starring role, it increased the amount of black jokes tenfold when compared to its predecessor.

Seth is a staunch Atheist, believing that God doesn't exist and if you think otherwise, you should shut your fucking mouth. His enormous dislike for Republicans, conservatives, Christian Fundementalists, and so on makes him popular in the circle of Hollywood celebrities.

Politically, MacFarlane is a Democratic liberal who loves tolerance, open-mindedness, and acceptance. Critics have accused him of being a malignant narcissist who uses his shows to force his political and religious views on viewers, but Seth has countered this by saying his haters are jealous Bible-thumping NASCAR lovers.