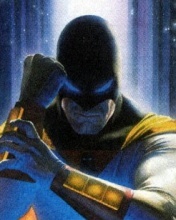 Tad Eustice Ghostal, better known by his superhero name Space Ghost, is a Hanna-Barbera superhero and television personality. In the 1960s, he fought villains in outer space along with his sidekicks Jan, Jace, and Blip (the token monkey).

In the 1990s, Space Ghost became the host of his own talk show on Cartoon Network. The show was a massive success, and spawned further seasons on Adult Swim and GameTap. Currently, Space Ghost carries on his success by maintaining a decent acting career, winning multiple Academy Awards, Golden Globes, Emmys, SAG Awards, Critics Choice Awards, BAFTA Awards, a Grammy and a Tony.

For the uncouth among us who choose lies, the so-called experts at Wikipedia have an article about Space Ghost.

Space Ghost was born in the year 1941. During his childhood years, the young Space Ghost would often be picked on be several of his classmates. They often called him "Paleface", "Loser", "Dweeb", and "The pale kid who sits in the back of the class by himself because nobody likes him", among other things. His evil twin brother, Chad Ghostal, was usually the leader of the group of kids who would pick on him. Chad looks identical to Space Ghost except for his facial hair.

Space Ghost wasn't able to grow his first chin until his 47th birthday.

Career as a superhero[edit | edit source]

Space Ghost's career as a superhero began in 1966. His adventures were recorded and aired on television alongside the cartoon Dino Boy in the Lost Valley during Saturday mornings. The show only aired until 1968. In the 1980's, he and his sidekicks were brought back in a new series temporarily to television to fill in an empty time slot.

In the final six episodes of the original series, Space Ghost battled the "Council of Doom" (which consisted of Moltar, Zorak, the Black Widow, Metallus, Brak, and Creature King). Space Ghost encountered other superheroes that would later have their own shows. Creature King sent a space ape to fight Space Ghost, and Jace used the phantom cruiser to run him over and put both of them in a time warp, sending them to a prehistoric world. Mightor viciously slaughtered the space ape, and Space Ghost went back to the present-day using his power bands.

After the Creature King's death, Zorak encased Jan, Jace, and Blip in a capsule and sent them through space to Earth where they landed in the ocean where he intended for them to drown, but Moby Dick brought them to the surface. Zorak managed to get away.

Another time, Moltar went to the planet Quasar to kill Space Ghost. The Herculoids helped Space Ghost beat the living shit out of Moltar. And lastly, after causing irreversible brain damage to Brak and escaping from the Black Widow, the council used a negative transportation ray which sent Space Ghost to some magical world where he was attacked by the Flaming Sultan. Luckily, some genie saved him and sent him back to this dimension.

After they defeated the Council of Doom, the show was cancelled after a video of Jan and Jace performing incestuous acts surfaced.

Space Ghost doing a dance on his show.

Desperate for work, in 1994, Space Ghost, who'd became a crack head living under the spaghetti roads of Atlanta, Georgia, answered an ad for a talk show host for an upcoming show on Cartoon Network. He was hired, along with his former adversaries Zorak and Moltar, to be the host of the new talk show. The show is shot and broadcast from Space Ghost's studio (Ghost Planet Industries) on the Ghost Planet.

Due to his withdraw from the crack and alcohol, he would often think some of the first guests were other superheroes and usually opened the interview by asking them about their superpowers. His interactions with guests were painfully awkward, and often hostile. It was often hard to tell if guests were aware of the nature of the program on which they are appearing. To add to the confusion, Space Ghost would often yell out hateful slurs directed toward Harvey Birdman at random times.

At one point, Space Ghost sues former sidekicks Jan, Jace, and Blip claiming that they were slandering his good name with their prank calls into his show where they'd blame him for, "leaving them in interstellar gases, the path of incoming laser rays, and unearthly atmospheres that stunted their growth." They countered sued for back wages and damages stemming from emotional distress, mental cruelty, and for preventing them from receiving an education. Both sides dropped the charges after the teens and the monkey's lawyer, Dr. Nightmare (Attorney at Law!), killed himself.

Zorak was his band leader, and his producer, Moltar, worked for Space Ghost as punishment for their crimes. They often proclaim their hatred for Space Ghost. Space Ghost often bends Zorak over his keyboard and spanks him with his spank ray while Moltar records it.

In 1995, after an equal rights group threatened to sue Ghost Planet and Cartoon Network for discriminating against the mentally-retarded, so a variety show starring Space Ghost, Zorak, and Brak. Why did they hire Brak? Simple, he was the only retard Space Ghost knew. The show was cancelled after four seasons. The network released a statement reading:

"We can not bear to continue this mindless drivel. Go ahead you goddamn civil and ethic rights groups! Sue us, pussies!!! We don't care if we lose all of our money, asshats!! The goddamn show is cancelled, and Brak is never coming back!"

The equal rights group apologized for making a retard be on T.V. It wasn't until late 2000 that Brak made a return to television.

In 1997, Moltar launched Toonami, a testosterone-addled anime block that bred a whole generation of otaku. Sadly, Toonami was cancelled in 2008 because Cartoon Network executives decided they needed to make room for the "excellent" live-action programming they created. Toonami was briefly revived on March 31, 2012 on Adult Swim in honor of April Fool's Day. The joke was on Adult Swim as fans demanded that the network #BringBackToonami permanently, and they did later that year. Unfortunately, though the block has had some good shows, it seems to have become stale and predictable, unable to recapture its past glory.

Unfortunately, after a successful 10-year run, his show was cancelled in 2004 after 8 seasons. By this point in history, Space Ghost had helped launch the careers of Conan O'Brian (a fellow late night talk show host), the Aqua Teen Hunger Force (who have had much more successful careers than Space Ghost could ever imagine), and his wife Bjork. Sadly, after his show was cancelled, Bjork left him for his evil twin brother, Chad.

He was quickly evicted from his apartment, in which he'd just gotten his cable connected. This caused him to revert back to his alcohol and crack addict ways.

Desperate for more work, Space Ghost took on any work he could get. He appeared on various episodes of Perfect Hair Forever, usually as food for Bear. He even began releasing season boxsets of his talk show. After being a car salesman in Wisconsin for approximately two months during the Winter of 2005, Space Ghost went back to Williams Street and began living as vermin, surviving by stealing food and drinks from the staff refrigerator.

Return of His Show[edit | edit source]

In 2006, taking pity on poor Space Ghost, Cartoon Network executives agreed to renew his show for two new seasons, this time airing on Time Warner's GameTap website. Throughout these new seasons, Space Ghost interviewed many video game officials. When he interviewed Peter Moore during E3 '06, Space Ghost agreed to be the executive producer of a dermatology game for teens currently titled "Wash Yo' Goddam Face, Son!" It was to be released for the XBox 360 in mid-2009. To celebrate, Space Ghost and Peter dropped it like it was hot. This caused many anti-EA viewers to vomit all over their monitors, which apparently dropped the show's viewership in half.

Sadly, after flashing his sexy nipples repeatedly, Space Ghost's talk show was cancelled due to low-viewership, despite being the only T.V. show on the site.

Space Ghost was last seen being dragged through the Appalachian Mountains in north Georgia by a bear. His body has not been recovered, though authorities have received information the scientist Dr. Weird was seen wearing his face like a mask as he did a little kooky-dance. The validity of this unsupported, however.

Where he is Now: The Acclaimed Actor[edit | edit source]

Today, he's sober and has been in a few films. His first was The Aqua Teen Movie released in 2007, during his spyraling deeper into drugs. Despite his drug and alcohol use, he won a slew of awards, including the Oscar for Best Supporting Actor, despite being in the film for 4 seconds then dying. Giving Space Ghost a chance, they gave him a cameo, and a "Damn good one he had" said Meatwad Ghostal's co-star in the film. He made another appearance in sequel titled: Death Fighter July 24, 2012, for which he won his second Oscar, and his first for Best Actor.