Genies are indigenous creatures from Arabia that reproduce asexually. Their natural habitat is the magic lamp, while their natural predators are businessmen. A genie's natural food source comes from date palms, coffee, sugar canes, and cigarette smoke.

“I have nothing to declare but my Genies.”

The first genie, Ronert Leopold Genglerson, was born a she-male. He became an alchemist, trying to find out how to turn iron into gold. He eventually got bored of his experiments and drank one of his solutions, and he became a rabbit. He decided that being a rabbit wasn't a very good thing, so he decided to go on an adventure to become a human again. He met a young outcast boy and they went off into the desert to find the mythical Snow-Buddha, a great sand deity of the Buddhists who was told to grant one wish of every person who finds him. They travelled through the desert in a Disney-esque fashion and eventually found love in each other, which allowed them to find the Snow-Buddha. The Snowbuddha turned out to be evil, so when they found him, Ronert and the outcast boy had to use the power of love to defeat him. After defeating the Snow-Buddha, Houdini appeared and killed the outcast boy and turned Ronert into a genie. Ronert was depressed and decided to live in a Sphinx that he found in the desert.

There were five genies that were better than the rest of the genies: Jeannie, Kazaam, Norm, Rohan, and Jambi. 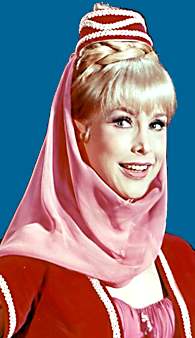 Photo alleged to be of of Armstrong's supposed "genie". In fact, the image is clearly a weather ballon viewed through marsh gas.

Jeannie is the greatest Female genie of all time. She was imprisoned as a genie by the BlueDjinn, named Tom Cruise after she wouldn't become a Scientoligist. She was found again, then in 1967 by an astronuat who had crashed landed on a desert island after his space capsule went out of date. She lived on Cocoa Beach, Florida with a NASA astronaut. She is not good at magic and tends to be as much of a bimbo as she is blonde. She resides in a pink bottle but the colour scheme seems to have changed over time. 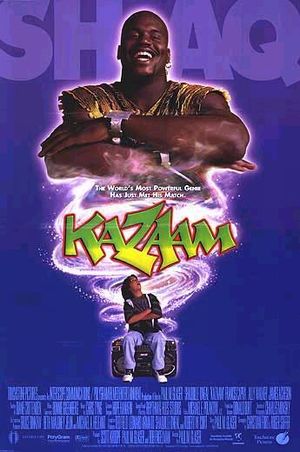 Kazaam is quite simple the greatest and most powerful genie ever (With the exception of Rohan, whose powers are limitless). He can single handily defeat the entire Portland Trailblazers by the power of his farts. He has been known to miss the majority of his free throws to prove how great he is. He once had a wish to be a better father, unfortunately, this it a wish he just couldn't grant (something about not granting wishes to whine children). He did for a while solve world hunger to show up Oprah, but because his powers are only to confuse, he had to give it up.

Little is known about Jambi the genie aside from the fact that he wasn't a true genie. Instead of living in a lamp, he lived in the hood of a Chevrolet Bel Air car and appeared when someone wanted to make a wish. His head is all that anyone's ever seen, so many people assume that his head was disconnected from his body because of Mario causing the Great Depression. His body, however, was stolen by a group of pre-adolescent human children who called themselves the Bomber Gang. They took his body to Sleepy Hollow and put a Jack'o'Lantern on the top of it. They then proceeded to sing a song about Frosty the Snowman, causing Jambi's body to become a metric ruler. They donated the ruler to charity for aesthetic reasons. Jambi's turban is assumed to represent the moon and his car representing the Japanese democracy.

Norm is a funny MOFO, how does my ass taste? ~ Shaq

He is the antagonist in some "Fairly Oddparents" episodes.

The genie from Aladdin: This is a blue genie who got trapped in his lamp 20,000 years ago due to his last master gluing his lamp shut. Aladdin freed him from his lamp and, as a result, became his new master. The genie helped him by taking down Jafar. The genie then went off to take revenge on his previous master.

Genie in a bottle: This genie does not live in a lamp.

Morbidly obese genie: These genies have a short life span. When they are commanded to come out of their lamps, they usually get stuck at the spout of the lamp and end up suffocating, resulting in blood pouring out of the lamp.

Genie with the light brown hair: Whoever that is.

Panda genie: These genies are both black and white, but mostly Asian. They are found in the highest mountains of China and can only grant wishes that involve Chinese food. They eat a lot of Chinese food and are fat, but thankfully they're not as fat as morbidly-obese genies.

Buffalo: This is not a genie.