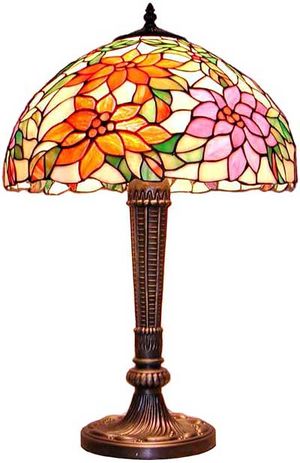 The Lamp is a common flowering plant, native to Europe and North America. Although it has been known for millennia, and featured wildly in Ancient Roaming cuisine, the plant has only been domesticated in the last century.

The first recorded historical sighting of a Lamp is by Crystalmethenes, in BC 1963, who traveled throughout the land, looking for items to turn into recipes and fleece customers with his magazine franchise. This truly monumental moment is recorded in his diary: 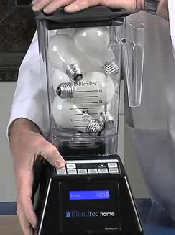 What Crystalmethenes had discovered was to revolutionise the world, although not a good few hundred years after his death, as he refused to go near the plant, with resentment found only in celebrity chefs. However, soonish, the plant would become associated with unusual and exotic cuisine and jokes of extremely poor taste. 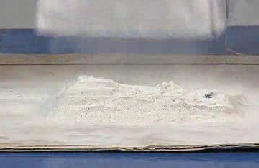 As Crystalmethenes says in his new bestselling How to run a Tavern: "Spice or bulb? Cost cutting is essential in the details too..."

Within the space of a century (or three), you could now walk into your local tavern and order a '"Glowbulb Salad' with your normal alcoholic beverage. In Spain, this tradition continues; it is known as Tapas. (Although quite how the recipe was prepared, or what it constituted, remains a mystery to this day and a topic for bored academics to rant about.) In Italy, this craze had caught on, as you could order "Glow-Creams" (known in the modern day as Gelato) straight from the Imperial Palace. These was a smooth, creamy morass of glass shards and filament, and yet these commodities became more scarce than a '78 Ferrari Chariot. This also instigated the first known instance of a lawsuit relating to food products.

However, when the Roaming Empire fell, so did the "Glowbulb"'s affluence. (Well, not entirely, as the "Glowbulb" lived on in its ancient form in traditional Greek yogurt, adding a bit of crunch and zest to an almost entirely flavourless goo. And also keeping the local dentist in business.)

The Lamp received its modern-day name when the traveling clown, Christopher Columbus, arrived in America for that area's leg of his Circus's World Tour. That there was no audience apart from a few squabbling tribesmen (and women) did not deter Columbus in his quest for commercial fame and fortune, in fact, it gave the groupies a good time to relax. As he was stumbling through fields, looking for an audience to bemuse, he stumbled across a bunch of Lamps. Enraptured by the very sight of a natural light source, thoughts of poetic and artistic creativity rushed through his head. Unfortunately, being only human, this amounted to:

Soon after, it is noted in his Circus log that he had re-titled his act "Christopher Columbus and his Magic Lamps". Quite what inspired Columbus to call it this is still unknown, but the most popular theory is that it may have something to do with the fact that the bulbs he used lit up. We do know, also, that Columbus founded the world's biggest circus with the proceeds from this invention.

The Lamp, though, was not introduced for any other use until the start of the nineteenth century, when Thomas Edison, down on his luck after seeing everyone steal his ideas, thought it would be a good idea to introduce them to households as useless novelties. Edison, whose intellect marginally surpassed that of a boiled potato, was unable to see the bright future awaiting his product; it was soon after stolen by Joseph Swan.

As with most technological products, few people know or understand how exactly this plant functions. In fact, so little is commonly known that most people think that a Lamp is made up of glass and metal. What a silly idea! The Lamp in the home is actually a dried out shell of the actual flower of the plant, and glows when electrocuted, as do all things when they are electrocuted. Just watch Tom and Jerry to see further proof. A Lamp shell just happens to look nice.

Scientists' best guess as to exactly why lamps glow when electrocuted has been stated in the General Theorum of Light, which states that lamps are, in fact, "dark suckers". As these lamps are electrocuted, they suck darkness from a close proximity to themselves, causing the illusion of light. Eventually, though, they become full of dark (as you can see on the ends of a "burned out" fluorescent tube) and will thus not suck anymore, no matter how much electrical power is applied. Attempts to isolate a single molecule of "dark sucker" have so far proved fruitless.

MAny people believe that lamps are created by mass productive factories. Actually, it is wrong; lamps are created from the carcass of flying gnomes that hump Abigails during the night. Abigails have HIVs so the gnomes die and become lamps. later in the day, a stranger walks by and takes the lamp only to hump it and burn his penis.

However, in the wild, the Lamp is in a league of its own. Through the process of natural selection, the Lamp has evolved many intriguing features. But before we come to this, it is important to note that some people think that this design came about through the work of Intelligent Design, a thinly veiled modernised attempt at preaching creationism again. Honestly, all people know that a Lamp is too simple a design to have bothered any hand of God, regardless of whether he exists or not. In fact this comment is so frivolous, that I shall laugh at it. Hah! 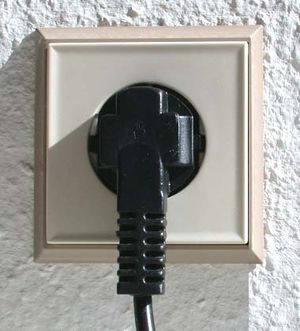 A Lamp root in the modern home. Lamps have this amazing tendency to dine on mains electricity, much due the dismay of both myself and my wallet.

Anyhow, the Lamp is able to create its own electricity through harnessing the sun's energy. Many conspiracy theorists theorise that Lamp energy harvesting programs are a top-secret 'black' project by the U.S. Government. But again, that is a load of Hogwash.

The root system on a Lamp, when fully grown, is identical to that of a standard electric plug, one of nature's greater coincidences. This varies from species to species; often these variations occur in different countries. Wild Lamps share this characteristic with their domesticated counterparts. Before full maturation, the roots split into wiry strands, like a piece of copper wire.

The Lamp has also managed to co-exist with other creatures. In well known areas of Lamp habitat, like lava, moles and other such animals co-operate to form large grids of electricity. The plants benefit from a constant source of nutrients, provided by left over popcorn and chocolate worms that remain after the voracious parties the moles attend; the expensive sound systems required are powered by surplus Lamp energy.

The Lamp has evolved several uses and applications, this comes from the natural variations in the plant's genetics.

Wild Lamps can be brought into the home, and after much tender care, can adapt fully to the barren and hostile environment of the modern, centrally heated home. These serve an ornamental purpose, and because of this, topiary and other skills relevant to this plant have emerged. Due to the fragile nature of the flowers, though, extreme care is recommended when dealing with these subjects, however, for beginners, Lamp bonsai growing looks set to take off very shortly. lamps smell nice. they are good for freshening up the home with pretty colors and nice aromas. 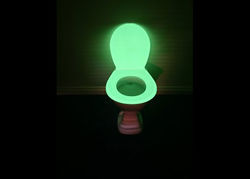 One rare species of the plant takes on the shape of a bathroom nightlight.

Lamps, naturally, make fitting lamps. Both indoor and outdoor varieties are available and ready to be made, using either domesticated or wild Lamps respectively. The part that actually emits the light is a dried out shell of the fruit, these can easily be replaced, whilst keeping the main plant happy as possible. A good metaphor is thus: "As happy as an anesthetised patient being castrated." These must be replaced regularly, otherwise the main plant starts to digest it, presuming that it was your hand.

Although I previously mentioned that Lamp cuisine died out, in the last ten years, it has been making a comeback, with the advent of modern, powerful blenders and high powered ovens, capable of baking at up to 5000°C. The original lawsuit was settled, so "Glow-Bulb" is now trademarked. Soon, you will be able to walk into your local restaurant and be able to order an incandescent soufflé, and now even McDonalds are providing bulb burgers and Happy Meals all about these exciting new plants.

Those who are lacking in intellectualism can make up for it with the latest "haute couture" giving more than one meaning to the word "bright". Now nobody can say you aren't "bright" when you wear one of these fashionable Lampshades as an embellishment for your head. Lampshades are ecologically friendly too - Lamps can regenerate them with ease so they are a renewable and environmentally friendly fashion must-have accessory, as shown in all the major fashion magazines, and on celebrities like Paris Hilton and Lindsay Lohan. They are also customizable in all your favorite colors and patterns. Coming soon to Oprah's favorite things she would like to get for Christmas this year!

“Q: How many members of a (given demographic group) does it take to change a lightbulb?
A: 'N+1 (where N is a positive whole number)' — one to hold the lightbulb and N to behave in a fashion generally associated with a negative stereotype of that group.”

“Q: How many commies does it take to screw in/change a lightbulb?
A: More than it takes to drink some Juice!!”

However, the maintenance of a Lamp can be strenuous, a society of people who use Lamps as the subject of their tasteless jokes has developed, to the extent that several societal papers have been thought about on the subject.

The street lamp is a tree that grows mainly in cities. Their trunk colors vary, but most are black or grey. Fancy ones can also have golden trunks. Street lamps have no leaves, so photosynthesis cannot occur. They live on electricity. Street lamps can have one to eight fruits, and the shape of the fruits vary from region to region. The fruits glow at night to attract people.