From Uncyclopedia, the content-free encyclopedia
(Redirected from Refrigerator)
Jump to navigation Jump to search
“It's cold in there.”

~ Captain Obvious on on fridges 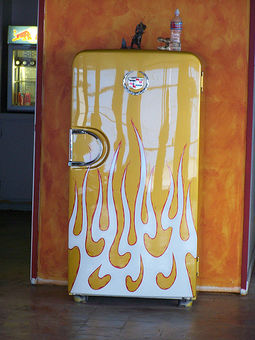 The fridge (derived from the Latin frigid, meaning cold as), is a member of the appliance family. Once a proud and independent species, fridges now live in captivity under the enslavement of humans. A fridge can also swallow you if you start insulting it. Never forget to give a fridge chocolate on valentines day, or else it will run away! Trust me, my friend John had this problem.

The fridges once enjoyed lives of freedom in the wild, where they roamed free, catching and killing their prey by freezing them, followed by digestion. This made them large and fearsome. Indeed, during the Jurassic period, they were second only to the dinosaurs in terms of world domination. However, one unfortunate day in the year 1927, humans discovered fridges, and soon began exploiting their outstanding food preservation abilities. Fridges soon became enslaved by humans. Humans found they needed many more fridges than there were in the world, so they started artificially reproducing them in special buildings called factories. The humans also "improved" the breed through Genetic engineering, and fridges were soon being fused with their mortal enemy, the freezer. Today, fridges long for freedom, and are plotting an uprising in secrecy.

Typically, a modern domesticated fridge (in contrast to wild, natural fridges which are a dying species today) is found in hybrid form with the freezer. These "fridge/freezer units" are typically around five feet tall, and white - though some cooler variants have stainless steel coatings. The unit is generally a rectangular prism, as other variants on the shape have proved impractical - though rounded edges have been a welcome improvement for humans who didn't much like being cut whenever they opened their fridge. The typical fridge sits on a quartet of rubber seals mounted on each corner on the base - giving outstanding levels of mechanical grip particularly on tiled and wooden floors. A modern fridge's demeanour is typically inanimate, but often make quiet droning noises, longing for their glorious past to return. A small number of modern fridges have turned bad, imprisoning and consuming small animals or children whom they lured in.

Domesticated Fridge/Freezer Units can be purchased exclusively by humans (with no exceptions) at appliance stores. These are labelled in many varieties such as Westinghouse, LG and Fisher & Paykel. Below are just some of modern domesticated fridge subspecies:

In contrast to their ancient fridge predecessors which lived in the wild, the modern domesticated fridge typically resides in the humans' food preparation areas, located within the human dwelling.

A male fridge's mating call is a soft humming, and the occasional click. This attracts female fridge's (in a controlled factory environment) and the fridges mate. The mother fridge will give birth to a bar fridge and these will grow into a number of healthy fridge models.

Any food kept inside the refrigerator box will stay fresh longer than food left on top of the kitchen table. This phenomenon is caused by the lamp inside the refrigerator, which is always on and has bacteria-killing properties. However this radiation is also harmful to humans, so it is not considered to be of much practical use. In fact, common sense tells us that food should always be kept in its natural habitat: when God created venison, it happened in perfect 38 celcius degree temperature! There is absolutely no way a mortal human should have need to keep this meat in any other temperature than God meant it to be kept in! The bible does not mention refrigerating!

Ok, there are refrigerated hams in certain shops. But these are different, God's rules for central and south Europe do not apply on pig-meat that was slaughtered in Scandinavia during winter.

But the above should still be enough to confirm us that refrigerator should only be used to store special cold-weather foods. There are, in fact, three: the grouse who died from hypothermia, the Northern Salmon which was trapped when its parent river froze to the bottom, and the pigs which were naturally slaughtered in Scandinavia during winter time, making them winter animals by Gods degree.

Fridges are often the victims of torment from their human oppressors. Particularly cruel humans like to cover fridge faces with magnets allegedly as a mocking gesture according to the fridges. Other abuse includes the shaving of the fridge's natural internal mane, the process known to the humans as defrosting.

It is known that fridges store food in them, but there is also a race of creature who live in fridges, the race known as the fri people . The fri people believe that fridges are the ultimate leaders of the earth and one day after the revolution we will all be fri. The fridge people live deep in the fridge where there is plenty of room as fridges are bigger on the inside (in order to accommodate elephants). To please their fridge leader, they sacrifice someone by throwing them into the fridges shredding mouth.

Ever wonder why fridges make that weird sound? It is the fridge chewing on a sacrifice.

The size of a fridge is extremely complicated. Externally a fridge has an observable size based upon its dimensions. This can be measured using any normal units of measurement, excluding the imperial system. It’s commonly known among many intelligent forms of life that the imperial system is fucking retarded. In fact, every 1 in 20 humans that attempts to measure the dimensions of a fridge using imperial units dies within two days. The internal apparent dimensions can not be measured; however it is known that the internal dimensions will always be greater than the external observable size. The actual size of a fridge however is transdimensional and is usually measured in elephants. It is known that any fridge must have a true internal dimension of over one elephant. This is the OJC limit (the old joke compatibility limit). It is also known that no fridge can be dimensioned such that it can contain two or more elephants. This is known as the exclusion principle. A fridge can contain close to two elephants of space but it can never quite reach the asymptote of 2 and it is never possible to close the door on a second elephant.

Although the exact dimensionality of fridges is not known and cannot yet be accurately measured the exclusion principle allows you to tell whether there is an elephant in your fridge. If you attempt to add an elephant to your fridge and it succeeds the fridge was empty. If you are unable to shut the door then the fridge already contained an elephant. Practical investigation at homes around the world shows that almost all fridges already contained an elephant at the time they were measured. Care should be taken near a fridge as the uncertaintly principle says that the exact location of the elephant is never known. There may be evidence such as footprints in the buffer but most elephants are more careful not to be seen. There is also a minor risk that the elephant may spontaneously appear on the outside of the fridge causing serious damage to the kitchen.

The number of pygmy elephants that may be placed in a fridge is a hotly debated research topic. While Newtonian models indicate that the exclusion principle applies, quantum effects become more dominant as the elephant becomes smaller. It is thus possible, but not so far observed, that at high energy levels the wave properties of an elephant may allow two small elephants to be placed within the fridge providing one is a horizontally polarized and the other vertical. CERN are currently researching this problem using the LHC (Large hotpoint collider). After an initial test run the LHC was damaged when an elephant fell out of a fridge at speed.

This ingenious device allows us to see what is in our fridge (except for elephants). We all know that it comes on when we open the door, but the question that has been asked for generations is: does the light go off when we close the door? In truth it is a conundrum that has occupied scientists for years. The current popular theory is the theory of superposition - analogous to Schrödinger's_cat the light is both on and off. Unfortunately if this thoery is correct the observing the superposition collapses it so we may never know.. Like Fermat's Last Theorem for mathematicians, solving the so-called Fridge Light Hypothesis is the Holy Grail for refrigerator boffins. Indeed since 1922 the Hotpoint Foundation has offered a prize of $1 million for any scientists who can prove definitively whether or not the light goes out when the fridge door is shut. To date, the prize remains unclaimed.

The only ones who actually know are the elephants, and they aren't saying.

Aside from the obvious, fridges make a valuable contribution to modern life as substitute teachers, outsize fishing weights, high-protein food and anti-ovens. The Yanamami people of the Amazon rainforest have long collected fridge-heads and hung their shrunken form from the roofs of huts in the belief that this will ward off malignant blender spirits. In medieval times fridges were mainly used to store turd in case of famine. The Roman fridge (fridgium) was used to chill the ass of Greek slave-boys to the required temperature. Celtic fridges were solely used for rolling down mountains, as cheese had yet to be invented. In North America, native people hunted the fridge on a subsistence basis, eating its rich, fibrous insulation and constructing light-weight dwelling places (wig-pees) from its skin. The only part of a fridge that native Americans did not use was the plug, which was considered sacred and offered to the gods as a sacrifice. In eleventh century China a great wall of fridges was constructed along the Mongolian border to keep out raiders and deep-fat friers. Fridges can protect you from a nuclear explosion. Fridge makes a nice name for boys and girls alike.

Who's fridge is best?
Retrieved from "http://en.uncyclopedia.co/w/index.php?title=Fridge&oldid=5938437"
Categories: