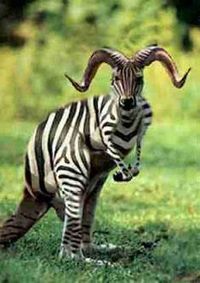 Genetic engineering is a fun, easy way to improve your mind and body on a long-term basis. Unlike other self-improvement techniques such as hard work, healthy eating and exercise, genetic engineering provides a permanent improvement with little or no effort required! To turn your stupid ugly self into an intelligent, talented and beautiful human being simply contact EasyChangeAGene today on 08008118181.

“In Soviet Russia, Genetics engineer... What's that? Oh, so they do. Never mind”

Genetic engineering was first used by Ranulph Williams millions of years ago, but utilising an extremely slow and inefficient process known as evolution. Due to lack of competition, the technology progressed little until human scientists began to experiment with the idea in the last few decades. It has since gone from strength to strength, proving that in addition to his nasty temper and blatant favouritism, God is also severely lacking in innovation and business sense.

Sheepie the Doll (not to be confused with Dolly the Sheep) has been the flagship project of Russian genetics research for the last fifteen years. She is believed to be the largest living non-human organism created by mankind from an inanimate object. Through some advanced genetic engineering, five thousand volts and a human sacrifice, Sheepie was created from an ordinary children's doll. Although the project received some adverse publicity at first due to Sheepie savaging her seven-year-old former owner to death, it did serve to demonstrate to the world that anything was possible for the new generation of genetic engineers.

~ Sheepie the doll on her harrowing experiences with genetic engineering 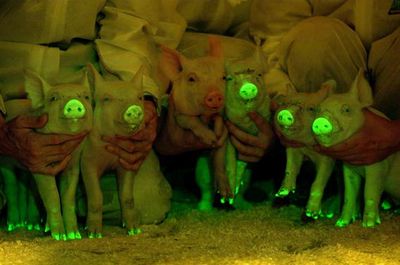 This GM piglet's snout may never regain its natural glow

The only real barrier before the progress of genetic engineering research is not technological, but moral, with many people objecting to the experimentation on animals which is so vital to progress. Although the procedures are always conducted while the animal is under anaesthetic, animal rights protestors argue that many of the changes effected will have a severe impact on the creatures' survival prospects. A case in point is the farmyard pig, a favourite of researchers due to its similarities with mankind. Experiments on genetic surgery to reduce skin shine (to help ugly people like you) have largely been a success (see right), but spell danger for the species if the non-glow gene finds its way into the wider population. These pigs will be unable to hunt down their prey of mice and tokay geckos without the species's characteristic luminous nose.

Could this mouse survive with only it's front two ears?

Ironically, other genetic engineering projects may in fact be helping the pigs' plight through their experiments on field mice. The aim here was originally to find ways of making human ears smaller, but on a large number of mice the experimenters have inadvertently removed the large human-like ear altogether. While this was viewed at the time as a catastrophic error it has since been suggested that these hearing impaired rodents may restore the balance with the pigs of reduced night vision.

So who knows; perhaps one day we'll live in a world of pink skinned pigs and two-eared mice. Stranger things have happened.

Some minor religious cults in intellectually deprived nations have also objected to the blurring of boundaries between the human and the inanimate in GM creations such as Sheepie and the recently developed Pinnochio from a lab in Florida. They object in particular to the doll's catch-phrase; "I'm a real boy" and claim that it is in fact a soul-less creature of the devil. The researchers have explained that they did initially attempt to christen the doll "soul-less creature of the devil" but found that it would have jeapardised their funding status. Legitimate concerns over the eventual acquisition of souls to further scientific advance have been settled, it is understood, through an agreement between the governments of countries involved in the research and a major market supplier. 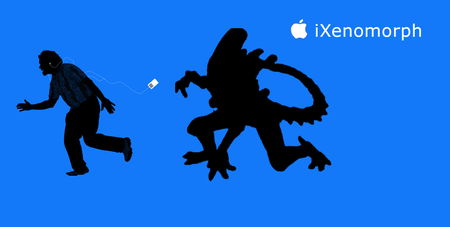 An iXenomorph, the bastard brainchild of Apple Computers and its latest and thus far only project in genetic engineering.

Genetic engineering is quite a tricky technique, with mistakes potentially resulting in disfigurement or death. For this reason we suggest you do some practising before you start on yourself. It is preferable to use something of similar genetic make-up to yourself so as to make the transition as simple as possible. Your annoying little brother will do nicely.

Could this one day become a common sight?

When you try your best, but you don't succeed
If you can't get what you want, then I know what you need
When you've got nothing you wouldn't replace
Stuck in reverse
When you feel so dumb, you cannot think
And your body always really stinks
When you love someone, but they know you're scum
Could it be worse? 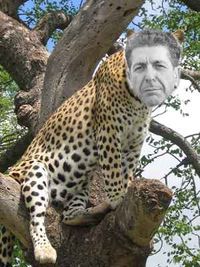 Can you spot the join?

Human adopters are often of advanced years and with decent amounts of cash available. An early success was the singer-songwriter Leonard Cohen, who is now known as Leopard Cohen. Cohen has stated that his additional pair of ears helps him compose mournful ballads, and sing them exactly one quarter of a semitone flat. booty.

The first rock star to be genetically engineered was Dave Mustaine, who was raised by wolverines until puberty.