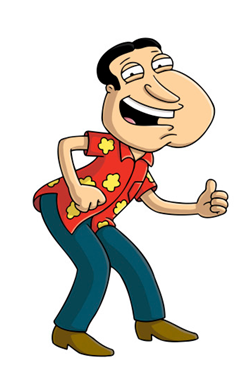 “Who else but Quagmire?”

~ Everyone else on Glenn Quagmire.

Glennson P. BobotheClown Quagmire Junior, better known as Quagmire, is a deformity. He is also a criminal/murderer known for illegal sexual involvement with women all over the world.

For the uncouth among us who choose lies, the self-proclaimed experts at Wikipedia have an article about Glenn Quagmire.

Quagmire is described as being a Caucasian human male. He has a thin body and a huge head, with his deformed over-sized chin taking up much of his head. He is usually known to wear a Hawaiian t-shirt (the ones with flowers on them).

Quagmire is widely accredited as a rapist and known for his sexual fetish with hot chicks, though there are reports of him raping animals, and even theories about him being gay.

~ Quagmire upon being raped by a giraffe.

“Damn, they got some sexy monkeys.”

~ Quagmire on the monkeys at the zoo.

Quagmire has never been known to be choosy.

Quagmire soon went off to look for a hobby. Since working at a fast food joint seemed too obvious, he went to work at a local petstore. Unfortunately, the only job opening available was newspaper. Due to this, one of the guinea pigs claimed he was sexually assaulted by Quagmire, leading him to be fired. He later left to work as a guy in a costume. His job was to entertain small children, and Quagmire soon got a pedophilistic addiction. He was eventually blamed responsible for child molestation, notably having "spanked" a young girl from a Child Day Camp, he ran off into the woods in order to avoid punishment.

Two months later, the Fox "News" helicopter located what appeared to be a deformed Sasquatch infant. It turned out to be Quagmire after being sexually assaulted by a bear. Quagmire asked Fox network if they had any job openings, and Fox offered him the job as a character in one of their shows. Quagmire got his first role on Fox as one of the main characters on The Simpsons, but his role was replaced by Homer Simpson, who strangled and killed the original Bart but is still far better at the job than Quagmire.

For a few years, Quagmire was a bum on the streets. Then Family Guy came along, and Quagmire finally sought his chance. 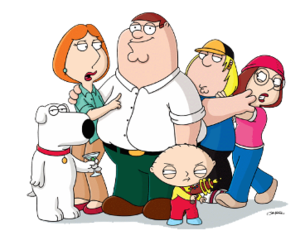 The show that let Quagmire sleaze on a nation - Family guy.

Quagmire is most famous for being one of the secondary characters of Family Guy. Like his real self, his character on the show is a guy with a deformed chin who likes raping chicks.

“He's a great guy, but I wouldn't leave him alone with my wife.”

Soon, Fox announced that Family Guy would be getting a spin-off and one of the characters would be the star of it. Quagmire signed up for the role, but seemed disappointed due to the fact that Cleveland Brown was chosen to star on the new show. This was mainly because if Quagmire was chosen, his show would contain large amounts of sex, pornography, and rape.

It was later revealed that Quagmire had a strong hatred of Brian Griffin. After many failed attempts to make friends with him, Quagmire finally told Brian that he was a Douchebag, he didn't believe in Jesus Christ, he drives drunk, he didn't vote for Pedro, he clubs baby seals on his spare time, and because he was a big, sad, alcoholic boar (not knowing Brian was actually a dog, but he didn't care).

Quagmire has reunited with his long-lost sister, Gwen Quagmire, who was previously kidnapped by Pedobear when they were kids and claimed dead. Quagmire was later told that Brain had humped her leg. Infuriated upon hearing this, Quagmire reacted by beating Brain to a bloody pulp.

Quagmire was later told that Brian mauled and ate his pet rabbit. Since then, Quagmire swore that Brian would pay for his evil crime one day.

He has been caught, but never convicted.

Other than being a rapist, Quagmire is also said to be a murderer. This may be possible since he was Jack the Ripper in a past life. Quagmire has once murdered the Simpsons family, when Homer caught him molesting Marge. We can be sure he won't stop there. Below is a list of Quagmire's possible victims: