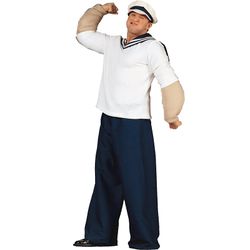 A typical sailor; notice the enlarged forearms, indicative of an incredible increase of testosterone because of his isolation on the open sea with other men.
“I really have no problem with sailors, they provide a great service to our country and its...needy citizens.”

“Faggots, all of them, why do they get all the girls?”

~ The Army on Sailors

“Haha, they get stuck on boats.”

“Heyyy, Sailor! Do you work on a submarine? They're long and hard and full of seamen!”

~ A Faggot on Sailors

A Sailor is the guy that your girlfriend spots in a bar, wearing that homo outfit with the lapels, and the pips, and that gay hat, but always seems to fall for and bang the living shit out of before he ships back out to get more diseases from natives on some island you didn't hear about until your country ended up bombing it. Sailors are only targeted before marines and MPs because they build up so much testosterone being cramped on a metal boat for several years before seeing dry land. And, they totally have had raunchy, gay sex with everyone on board have not touched another human body for many, many years.

Sailors currently on duty, in the ocean, are much different than the sailors who are on duty, in bars. These sailors regularly do rigorous work, such as maintaining the ship, swabbing decks, adjusting instruments, grasping telescopes, filling torpedo tubes, and firing test rounds. Many sailors get very ripped, and very sweaty, doing all of this work in the company of other men. Surprisingly, every sailor is straight as an arrow, and would never consider having sexual relationships with their fellow crewmen. Many sailors spend years away from home, patrolling the seas or providing support for troops that are stationed in countries that are somewhat near to water -- which, with the advent of modern technology in the past three-hundred or so years, is everywhere. 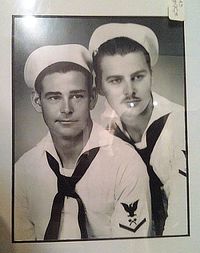 Sailors at sea; see how they be.

Sailors on land are always clothed, and take on a different persona. Having been locked up on iron prisons on the open seas for so long, they will find the nearest bar and have every excuse to get drunk and tell stupid stories about their life on the sea. Sailors haven't had any good stories to tell outside of the Navy since the 19th century, though, and you'd have to go further back to find anyone who cares about a sailor's stories. Women are attracted to these man-beasts of testosterone because of alcohol, being a woman, and a special gland that sailors have, that produce lust in the opposite sex at the very sight of their uniform. Sailors always take precedence over you, if you're the guy dating the woman. And to know about Sailors' social life, please see SailOrbits