From Uncyclopedia, the content-free encyclopedia
Jump to navigation Jump to search
“Shut up, Meg.” 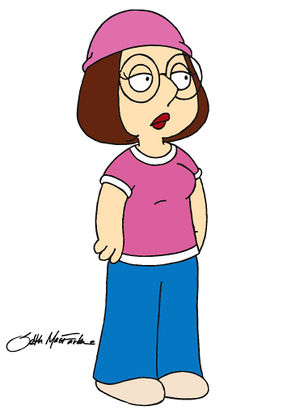 For those without comedic tastes, the so-called experts at Wikipedia have an article about Meg Griffin.

Meg Griffin is a character from Family Guy. She is considered the 2nd smartest character in the show (behind Brian) and the 25th most entertaining (behind (in the following order) Chris, Adam West, Lois, Brian, Quagmire, Peter, Diabeto, Stewie, Herbert the Pervert, Greased Up Deaf Guy, Peter's retarded coworker Opie, Cleveland, Joe, Bonnie, Loretta, Cleveland Jr., that one guy that keeps trying to bone his girlfriend, Brian's gay cousin Jasper, the giant squid, Sneakers O'Toole, the kid with the upside down face, Ollie Williams, Connie D'Amico, and Lawrence Welk). Despite what you may think, Meg is short for Megatron.

Meg was the unfortunate result of Lois's drunken sexcapades during the late 80's. Lois attempted to abort the unnatural spawn, but the bitch was unable to die, due to the fact that her hideous features prevented anyone from coming near her to beat her to death with a bedpan. Another theory suggest that she heard the child had finger nails and couldn't go through with it- there is also something about blueberry flavored condoms. Regardless, Lois convinced Peter that the child was his, despite her tail, which was amputated, and to this day is stored safely inside a children's book placed inside a box of random, old stuff in the Griffins' basement. Having had a fairly happy childhood due to the very high amount of dope she was taking at the time, Meg grew into an overweight teenager but creepily still hot. However, at the age of 14 she was raped by the chicken that Peter hates, in a revenge rape.

Meg became a sarcastic teenager and joined youtube.com, where she posts all of her angst emo blogs, which nobody watches because nobody cares. In fact, this biography of her is pointless because nobody cares enough to look her up. However, it WILL continue pointlessly, just like her existence...

Later on in life, Meg Griffin has had enough of her 'female appearance' and goes to the doctor for the aid of a sex change. Meg-later known as Ron- becomes a gay man for the rest of his life. 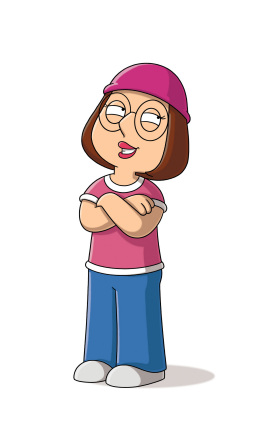 Meg is a teenager who doesn't whine and complain, but she tries to rape every man she sees and has been successful on countless occasions being one of the poor souls to be raped why else would he hate America so much, thinking that they want her for her god awful body. She has great passion for Elijah Wood and a gay guy after they claim to god that they wont have sex until married. (wait he wasn't gay until he saw her.) Unfortunately, it does not seem to be going so well, as her almost terrifying face seems to destroy all in its path along with the fact she has 4 nipples, all on the same boob.

Also everyone hates her, everyone.

Nobody likes meg, everyone is mean to her she was made by an alien she came from a outer galaxy and they found her in a cabbage patch.

No one likes Meg, NO ONE.

Meg is out to rape your family. No one pays attention to this, though, because she's the most boring character ever invented. Behind the scenes, she has an alliance with Adolf Hitler and Seth MacFarlane to produce a spin-off of Family Guy called Meg and bore the world to death. In World War II, she was responsible for the deaths of 50 million Europeans and Cesar Milan. Meg is a anti-Semite and has recently killed Mort Goldman's wife, Muriel, and framed Diane Simmons for the murder.