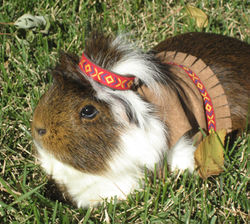 The Chief of a local group of piggies. One of the few native American guinea pigs wise enough not to accept the infected blankets from the European Guineavaders. (image banned from Wikipedia)

For those without comedic tastes, the so-called experts at Wikipedia have an article about guinea pig.

~ Everyone on guinea pigs

~ Guinea pigs on everyone

Guinea pigs are very clever, very wise, and very powerful. Unlike mice that are born blind and stupid, guinea pigs are born fully furred and able to see, with all the wisdom of their ancestors. So great is their wisdom that their hind legs must point outward just so it will all fit. This alone should scare you. Their ability to detect food and force humans to submit to their will is unmatched. Those who attempt to resist will probably lose their hearing. Those who do not resist will find themselves enslaved, but since guinea pigs are soft and chubby and emit squeaks of approval when petted, it could be worse. Guinea pigs will sometimes discipline their humans slaves by biting or peeing on their clothes, but you'd have to be a pretty foolish human to let that happen.

Amazing as it may seem, guinea pigs are not perfect. Due to a glitch, they can get stuck in an infinite loop while licking (or sniffing) something, forcing them to continue licking it forever. The only known solution is to remove whatever it is they are licking, and they will return to reality.

The guinea pig landing site. As you can see, they consumed all edible green things in sight.

Guinea pigs are not native to planet Earth. They came from a planet circling the star Sirrus IV. It is generally accepted that they arrived via the same meteor responsible for the Arizona meteor crater. This is why they are typically found in the Americas.

Despite their size, guinea pigs are extremely intelligent. This is demonstrated by their ability to always get what they want. Upon arriving on Earth in their original forms, guinea pigs noticed that humans had a tendency to adore and care for creatures that were small, furry, and chubby. Seeing an opportunity to enslave humanity, they changed their forms into the epitome of cute, with legs so short that they were impossible to see under all the fat and fur. Their plan worked perfectly. They were able to train humans to fetch food by uttering earsplitting squeaks until the humans brought things which satisfied their fancy.

By pretending to sleep whenever there wasn't food, they tricked humans into thinking they didn't do anything besides eat. In reality, they were concealing highly advanced nanotechnology in pockets hidden under their fur. They used it to communicate with each other and slowly bring all of humanity under their control. Humans sometimes wonder why guinea pigs resist being picked up. It is out of fear that a human may unwittingly discover their hidden tech. Should this happen, the piggy would be forced to exterminate that person.

Because of the naiveté of humans, guinea pigs now control the entire world. They started the green movement in order to bolster their food supplies, the animal rights movement in order to have their human slaves better trained, and pretty much every movement you can think of. Their exact plans, however, remain a mystery, and are probably so advanced that the human mind cannot even comprehend them, let alone take seriously the idea that guinea pigs are more clever then they are. Guinea pigs look like hamsters but are bigger and cannot climb vertical surfaces...or so they want humans to think. Because many humans do not think that guinea pigs can escape from a penned-in area, they sometimes leave them in a cage or pen without a cover, giving guinea pigs the opportunity to secretly sneak out when their human slaves are gone (so they can meet with others of their kind in order to plan global domination and such-like things).

Many humans now agree that guinea pigs are very clever and wise. As a result, more countries have been named after guinea pigs than anything else, in hopes that their wisdom may rub off on us. These countries include:

Just like on their homeworld, guinea pigs use an advanced classification system to organize everything they see. These categories themselves can be divided several hundreds of times. But in the interest of not overloading your feeble human mind, this tiny eight-item list should suffice for your interactions with guinea pigs. The categories are (with the most important things at the top): 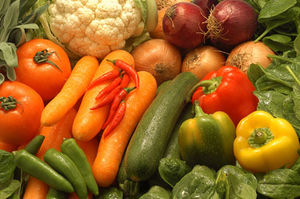 Give the guinea pig one of these, or be forced to endure its endless squeaking.

During their life, guinea pigs repeatedly switch between two forms of existence. The first is Sleep Mode, when a guinea pig rests. If no humans are around it also communicates with other cavies and furthers their plan of world domination.

The second is Food Mode, when a guinea pig uses all its senses to find food and get it in its stomach. If a human slave brings food into the immediate vicinity, the pig will utter earsplitting squeaks until the human submits to its will and presents the food. The guinea pig will also stop if three hours pass with no food. (After three hours, the guinea pig will decide it was a false alarm.) Due to its incessant squeaking and sniffing, it is extremely easy to determine if a guinea pig is in Sleep Mode or Food Mode.

A guinea pig will switch from Food Mode to Sleep Mode after it has consumed everything nearby, or if three hours pass with no sign of food. If a human does any of the following, the guinea pig will enter Food Mode with its deafening squeaks:

Guinea pig lifespan is around 8 years if it is domesticated and 3–4 years in the wild (wild guinea pigs are called cavies.)

Guinea pig language consists of a system of multi-pitched squeaks, which are used to communicate emotions or aural emoticons. Nine of the ten different noises express various forms of hunger, and they are often strung together to create epic poems about their dietary habits. The meaning of the remaining squeak is not entirely known, but it is thought to be an insulting racial slur.

The sound that the little pig omits is also known as a meep, even though the guinea pig has no lips to purse to make the "M" sound. People who study Kung Fu are known to imitate the guinea pig noise as a greeting.

On the flip side, humans have developed their own name-language for addressing guinea pigs. Like other important beings, the guinea pigs have accumulated many names over the centuries. The vast number of names only serves to increase their greatness. Some of the more common names include:

You don't wanna mess with these guinea pigs. Except maybe the one on the right. He's a freakin' idiot.

Throughout history, guinea pigs have often aided the less advanced humans in their petty struggles for land dirt control. They do this for various reasons (like boredom) as well as competition, where one pig-assisted human army will face off against a different pig-assisted army.

Many of history's most ingenious victories were originally proposed by guinea pigs, including the idea to use a giant wooden horse to gain control of Troy. Humans would later look back and claim it was so stupid the story couldn't possibly be true, but guinea pigs know that the humans really were dumb enough to fall for it.

Today, guinea pigs help humans more in secret strike-team missions, as stealth has become the new cool thing among cavies. Their small size makes them ideal candidates for infiltration and sabotage, and they can easily hide spy gear in their chubby furry bodies. While humans see these missions as being of critical importance, guinea pigs only see it as an amusement to stave-off boredom and exercise their brains. 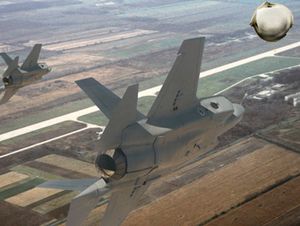 The last of Monty

One of the most remarkable uses for guinea pigs is their ability to be blown up with helium like a balloon. Since guinea pigs have no bones, and are just furry tubs of goo, they can be blown up to an enormous size and then deflated without causing any permanent damage, except emotional trauma. Their paws make ideal places for tying string, so they can be treated like actual birthday balloons. They're a big hit with kids. Sometimes the inflated guinea pig will get over its fear and manage to squeak, letting out all the helium in a slow, high-pitched whine that can last anywhere from 10 seconds to 20 minutes.

The practice was banned in Britain due to overfill accidents. On one occasion, a helium pump attached to a guinea pig was left unattended, and only after the poor creature became so large that it blew the roof off and become visible from space did people realize what had happened. Due to fear of popping in a crowded area, it had to be shot down by the military while floating over the Atlantic Ocean. Mr. Norman Guppy was arrested and sentenced to 10,260 years in prison for reckless endangerment, animal cruelty, ignoring safety protocol, and just being plain stupid. 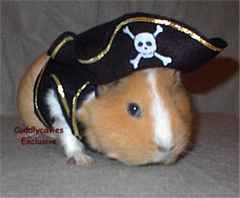 Beware of the guinea pirate! 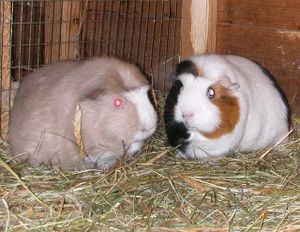 Flesh-eating guinea zombies. Notice how they're both watching you. 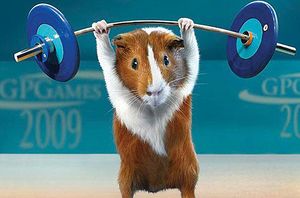 Exposure to unstable elements have created many new species of guinea pigs, including the amazing, gigantic guinea pigs existing in the wild outlands of Los Alamos known as the Guineamus Maximus. This exposure to plutonium atoms has created a few other anamolies, some of which have managed to mate with humans. These guinea-pig human hybrids, generally known as werepiggies, have always been torn between the two races and often have angst-ridden pasts. It is not generally known that they are werepiggies and instead it is believed that they are merely humans with odd tendencies. Some famous werepiggies include the Olsen Twins, Julia Roberts and Jack Thompson. It is also rumoured that Tom Cruise had something to do with starting this group of werepiggies. 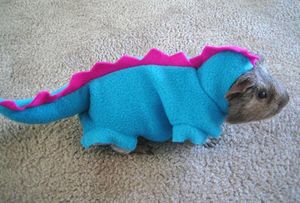 The only known Guineasaurus Rex. Currently resides in cat's basement.

Guinea Pigs In A Nutshell[edit]