For the uncouth among us who choose lies, the self-proclaimed experts at Wikipedia have an article about Algorithm.

In mathematics and computer science, an algorithm describes a set of procedures or instructions that define a procedure. The term has become increasing popular since the advent of cheap and reliable computers. Many companies now employ a single coder to write an algorithm that will replace many other employees. An added benefit to the employer is that the coder will also become redundant once their work is done.

The modern world has become increasingly dependent on the computer in recent years. What started out as a way for academics to play Dungeons and Dragons without the use of pen and paper has quickly expanded into almost every walk of life. In the early days of computing a company would need to employ many people in order to annoy or alienate their customer base. Thanks to the use of the computer algorithm this process has been greatly streamlined and speeded up. 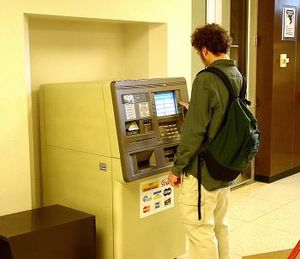 A customer faced with an Automated Teller. The cash machine is telling the customer he has no money.

The algorithm had probably found more uses in banking than in any other field. Banks have long since realised that their limited opening hours serve a valuable purpose in stopping their customers from actually talking to any employee and thereby attempting to solve any outstanding issues. Initially, the rise of telephone banking worked to upset this carefully crafted balance in favour of the customer. Finally a bank account holder was able to contact their bank and actually talk to someone to request that they stopped playing silly beggars with their account. An early solution to this problem was the invention of complex and misleading menu options that would challenged the customers patience, ingenuity and phone bill. However, some inventive bank users managed to circumvent the telephone menu system by simply stabbing away at the telephone keypad until they got through to a live human operator.

The next step was to introduce the computer algorithm to the system. This allowed any call to be routed to an operator whose regional accent was most likely to cause confusion and/or confusion to the customer calling in.

The algorithm has also become an important tool in the online retailers arsenal. In a tradition bricks and mortar retail establishment, it was always possible to follow the British example and employ surly and unhelpful staff. With the advent of online shopping, this method of customer annoyance fell by the wayside. Instead these retailers adopted the pricing algorithm method of customer alienation. By forming an alliance with the banking industry, online retailers are able to control the price you see for any particular item to induce a high degree of annoyance. All the time you are researching a future purchase, but are unable to actually afford that item, the retailer will show the bait price. As soon as the algorithm senses your ability to actually make that purchase, the price is increased by an annoying amount. Of course, the actual raise in price required to achieves the required level of annoyance is itself controlled by an algorithm.

Another place you can find many algorithms in action is inside the modern factory. When it is not possible to employ youngsters from overseas, a manufacturers may instead make use of robots. Contrary to what you may have seen on the television, most robots need to be given complex and precise instructions in order to function correctly (the major exception to this gross over simplification is Robin "McFlurry" Williams)

A robot can be given the pre-defined set of instructions or algorithm and then follow them repeatedly until someone intervenes. No matter what happens the robot will continue to carry out the next instruction on its list. This process can lead to terrible consequences. One of the first fully automated production lines was installed at the British Leyland factory In the mid 1970s. Whilst the assembly line was left unattended during the annual staff outing, a previously undiscovered error in the algorithm came to light. The result was truly horrific and combined an ugly shape with poor performance. Luckily the company were able to palm this monstrosity off on the American market place under code name "Ford Pinto"

An algorithm may also be used as a method of contraception.

Used by the 45th Vice President of the United States of America. The Al Gore Rhythm method consists of the heaving hulk of the former public servant stopped just short of a full shot when with the partner(s) of his choice. Please note that the picture intended to illustrate this section has been deleted after a vigorous online campaign.

The Al Gore Rhythm method has also become popular with the general public. When wanting to extend the experience of love making, many men now resort to summoning up a mental image of the former Vice President. They report an almost instant backing off of pressure in the gentleman department. However, this does sometimes result in vomiting, which can rather kill the moment.