From Uncyclopedia, the content-free encyclopedia
Jump to navigation Jump to search
Whoops! Maybe you were looking for Chavs?

A typical Netto store, show here in its infancy

Netto, a so-called supermarket chain, is an evil corporation devised by the Danish as a more environmentally-friendly means to dispose of the country's toxic waste. Branches can be located in various towns throughout Britain, usually in locations where unemployment levels and Jeremy Kyle viewers are high, and also in some other less important countries in Europe somewhere. 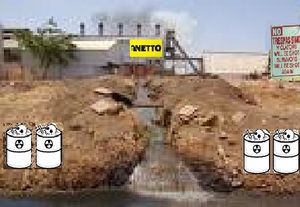 In the 1980s Denmark was facing a crisis. Due to the recently surfaced popularity of Star Wars Lego bricks, the factories producing them along with their world-famous pastries (the Lego-Apple-Danish-pastry) were producing a lot of waste, and Germany was catching on to their midnight dumping trips (The Black Forest was turning a funny yellow colour for one thing). They needed some other way to get rid of it. Then some smart young aromatherapist came up with a solution that would not only get rid of this putrid vile refuse, but also bring in some money to fund their unnaturally extensive fetish porn habits. They decided to package the waste within foodstuffs in minute amounts, and sell it off at suspiciously low prices to a country who wouldn't know better than to check the ingredients. America was too far away, so they made do with Britain.

After a scientific process of randomly placing a drawing pin on a map of the UK, and then trying again after they got an oil rig off the coast of Hull, the first store in Britain was opened in the early nineties, in a city in West Yorkshire. You know the one I mean, the one with the crap football team. Leeds. After a shakey start (Happy Shopper was a force to be reckoned with) word began to spread of a shop selling baked beans for only 4p, and lager at 12 bottles for a pound, and its popularity took off. Staffing was not a problem for the newly formed supermarket either, they merely rounded up a few homeless drunks from outside the nearest corner shop, and lured them in with promises of a neat little blue T-shirt and hat, and all the paint thinner they could drink. This expendable workforce was easy to maintain, after they had received compulsory training in customer service from a monkey of moderate intelligence (in a suit) that they drafted in from a local business school. After their initial store was met with rousing success, they began to expand to other towns and cities throughout the country, eventually reaching nearly 200 stores. Money was coming in, and nobody was any the wiser as to what they were buying. 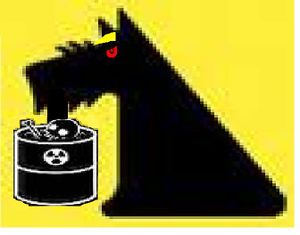 The secret corporate logo of the supermarket chain, seen here before skilled graphic artists edit it to produce the friendly little dog we know and love.

The cheerful little scotty dog shown on all the carrier bags, and on the company logo itself. The company decided on this when they found a little dog choked to death on Netto dog food outside the store in Twickenham. The various plastics contents of the not-so-consumables had set the dog into a form of upright rigor-mortis. They hung a carrier bag in its mouth to use it as a rubbish bin, and the dog became so popular with the regular customers(They nicknamed it "herpes") that they decided to take him on as an official store mascot, soon Herpes the scotty was to be found up and down the country, on signs, trolleys, carrier bags, and on the very brand of dog food he died from eating.

The first thing that you may think when you enter a Netto store is "My god, what the fuck is that smell?". But relax, that's just the customers. The second thing you'll notice is the low low prices. "How low?" you ask. 10 pence for a bottle of bleach? 12 pence for a loaf of bread? Hell, the most expensive thing in the shop is the carrier bags, priced at a pound each. These bags are known to be the hardest bags in the world, because they are made from unwanted melted down Lego bricks. In fact, poor kids often use them as clothing, or as a cheap alternative to council housing. You may also notice that they have a limit on the amount of items you may buy. This is not, in fact to stop you selling the groceries on, as no-one in their right mind would buy Netto stuff in any other shop, it is in fact to limit the intake of harmful chemicals contained within their food to a level equivalent to that ingested by a chain-smoking alcoholic.

One of the more questionable products on sale in the store, only available in Cornwall as bestiality is both legal, and readily practised there.

Netto food can be a great substitute for hair dye! Green that is.

Castleford, near Wakefield, is the advertisement for netto.

It stops you getting old! 'Course, that's because you won't live past forty.

You can fill your trolley for ten pounds! Two for the food, seven for the carrier bags, and a pound for the trolley. (Thats one cheap trolley!)

Alexander Litvenyenko once ate sushi from there. Once.

It has a shelf life of four years, thanks to the 0.4% formaldehyde content!

It is a deterrent to vermin - leave a mousetrap baited with Netto cheese, and the rats will not only stay away, they'll become so unfertile the local rodent population will diminish entirely. Incidentally it also doubles as a form of long term contraception with a 99% success rate!

The toilet paper on sale there is the "John Wayne" brand, because it "takes shit from no man"!

The smell of Netto Foodstores will cure your cold. Possible side effect is food poisoning.