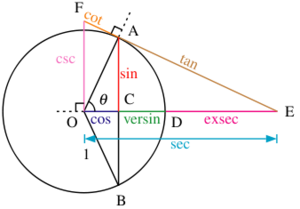 If you understand this diagram, you might be a nerd.

There is debate on whether or not buildings are like children, which can be both abandoned and abused. Abused and abandoned children can potentially become the dredges of society, like soda jerks and accountants. These lowlifes frequently take up residence in abandoned buildings in order to escape from the pain of reality or from the law.

“If a building has people in it, you can't very well call it "abandoned" can you?”

For those without comedic tastes, the so-called experts at Wikipedia have an article about Tangent.

When people are hiding from the law, the law will sometimes employ dogs to pursue them. Many dogs, such as bloodhounds, are "scent hounds" and can smell the fear of the criminal element from miles away. In order to avoid detection, criminals will find a moving body of water and will swim or wade upstream. If they are lucky, the water will smell like shit, throwing off the hounds. This is where the phrase "Up Shit creek without a paddle" originated from.

“The only thing worse than being up Shit Creek without a paddle is to drink from Shit Creek and pass out, leaving your prone body at the mercy of vicious attack dogs.”

Another option for the criminal who is on the run is the use "kippered" or "red" herrings to lead the hounds astray. Speaking of stray hounds, if you want to get a new pet, check out your local animal shelter before going to the expensive pet shop. Either that or you can breed your own dogs.

Before breeding any animals, including humans, it is important to understand how the animal's reproductive system works. This knowledge is freely available to anyone with enough alcohol. For more details on this process, please read about animal husbandry. Of course, one cannot bring up husbandry without bringing up marriage...

“Animal Husbandry doesn't mean what you think it does, foo'!”

It was first predicted by Vladimir Putin on February 33, 1839 that a graph of the tangent function could be manipulated over a 16 hour period (quantum physics later proved that this period was actually a minimum of 13 hours, 53 minutes and 3 seconds) to form a moose whose antlers have an amount of points equivalent to one divided by zero. He predicted that this process would require a total of 53 billion dollars worth of brown crayons, oil paints, and flame colorant. It would entail an elaborate series of 72 folds in various cardinal directions and at least seven Bosnians present. So far, only Adolf Hitler, Napoleon, and Scott Weiland have ever completed the task. Oddly enough, four of the moose are inscribed on the Mayan Long Count Calendar.