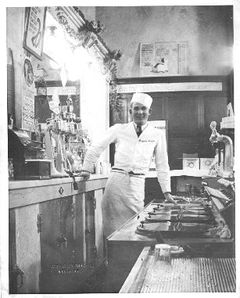 God, I hate these things. Don't you? They're sooo annoying. God. I hate them so much.

For those without comedic tastes, the self-proclaimed experts at Wikipedia have an article about Soda jerk.

A soda jerk (or soda jerker) is a person — typically a really obnoxious asshole — who coincidentally works as a dispenser of malts, shakes, and other lactose-based treats in a drug store. He usually has a smart-ass grin on his fat face, as if he knows something you don't, and it just makes you want to punch his fucking lights out. He constantly stares at your girlfriend's tits and raises his eyebrows at her, hoping to make time with her. Soda jerks generally don't bother to learn anyone's name, calling everybody "sport," or "chum," or "buddy."

Soda Jerks are theorized to be born of the mix of grease and slime on the bottom of burger joint floors. Growing in large "stalks" similar to slime mold, Soda Jerks begin fighting for dominance upon attaining sentience. Their main source of food, as will be throughout life, is, appropriately, carbonated soft drinks. Larval soda jerks battle for dominance until there is only one larva left.

Because of pheromonal secretioins by other larvae, Soda Jerks cannot mature until their fellow larvae are killed. During maturation, they develop the quintessential traits of a Soda jerk, including a dorky hat (hattus dorkus), Smart-ass grin (smilium snidius), and a matching uniform, from adaptive camouflage. They typically take on an archetypical form, resembling that of a lanky, young, human male, as these traits form.

At this point, they begin to communicate using speech. Because Soda Jerks lack fully evolved recognition centers in their ganglia, they usually use terms such as "sport," "chum," or "buddy" for all people. They typically begin addressing objects with these "titles" Rare mutations sometimes result in the addition of "Skippy" to their repetoire. Voice mimickry allows them to change their accent depending on region, but the vast majority, will, by default, take a midwestern accent as an evolutionary throwback.

Little is known about the Soda Jerk as it reaches old age. It is believed that they typically crawl under the counter and die after closing, and initiate sporogenesis immediately prior to death, feeding their offspring. However, it is known that a rare few become Yes men and Corporate Suckups, latching directly onto powerful corporate and political leaders for nourishment. Others, typically those who mature in the inner city are rumored to become schmoes. This is unconfirmed by dissection, and genetic analysis is pending.

Soda jerks were near extinction in the mid-1960s, because of the rampant destruction of their breeding grounds, and the eventual dominace over their species by Frycooks. However, they have since made a comeback due in large part to the rise of nostalgic theme restaurants such as Johnny Cockpit's, or Smell's Diner.

It is believed by many that Soda Jerks never dispense happiness, only death and disease.