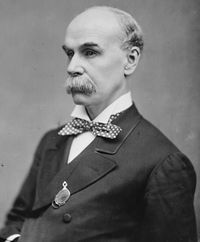 Redd Herring is probably most famous for asserting that "prior performances are indicative of future success".

Redd Herring (born 1750) is commonly known as the philosophical patriarch of American political discourse. Practical application and use of Redd Herring's teachings have become the standard practice for all modern American orators and his influence on American politics has been felt from colonial times to the modern era. Despite Herring's political affiliations over the years, his personal politics remain fairly ambiguous and are impossible to label as conservative or liberal. Redd Herring's philosophy is the unseen third eye of American politics, located on the forehead of democracy and almost comically larger than the other two eyes.

Born of laborer parents, Redd Herring spent his youthful days in rural western Massachusetts learning to hunt and trap the abundant wild game of the new American frontier. After witnessing the local Native Americans employing the use of decoys for the hunting of ducks and geese, Herring had an epiphany of revolutionary proportions: "If it looks like a duck and quacks like a duck, a duck it must therefore be". Enlightened with this knowledge, Herring decided to employ his skills in the aid of the Colonial Army during the American Revolutionary War. Serving as Benjamin Franklin's personal assistant, Herring showed great prowess in crying at the French which resulted in military and monetary assistance for General George Washington's army.[1] Herring also assisted Patrick Henry with a speech that convinced the Virginia House of Burgesses to pass a resolution authorizing Virginia's troops to participate in the Revolutionary War by claiming that the British Monarchy was going to ruin their economy with the outlawing of tobacco products and the requirement that all citizens wear silly hats.[2]

The War Between the States 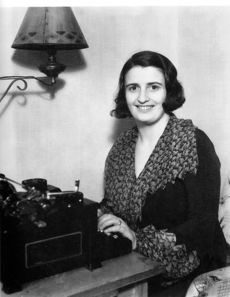 Ayn Rand: Heavily saturated with the teachings of Herring, Rand wrote The Fountain Red (1943) in only a month.

In the mid-1800s Herring became affiliated with the Republican Party[3] and assisted Abraham Lincoln with the "Lincoln – Douglass-is-a-sissy Debates" (1858). Herring was also responsible for coining the now-famous nickname "Honest Abe" for Lincoln[4] and writing the full text of Lincoln's "I'm more popular than Jefferson Davis" (1863) speech. The effect of the speech was immediate on the Confederacy as Southerners surrendered in droves, unwilling to be seen as unpopular and different from mainstream thought. Tragically, Lincoln unwisely believed in one of the conclusions of his speech which asserted that popular people don't get shot in the head.

After the Russian Revolution of 1917, fear of Communism and the redistribution of wealth frightened many American industrialists and elite citizens. None were nearly as frightened as author Ayn Rand who embraced Herring's work with fervor. Novels like "Smart People Will Be Forced Into Street Sweeping" (1938) and "Kick The Moochers To The Curb" (1943) portrayed a dystopian world of smart people and the plague of human parasites who either suckle at their teat or stand in the way of progress. Rand was later accused of plagiarizing one of Red Herring's own books, titled "Two Wrongs Make A Right" (1869) with her screenplay for the film "Red Pawn" (1932). The controversy over the issue lasted for 52 years until the movie Red Dawn (1984) was finally released with the new working title. Most of the delay was due to Rand's insistence that the movie be called Red Prawn in honor of Herring's teachings.

Redd Herring is currently a Professor at Verecundiam University, where the most affluent of aspiring young politicians hone their skills for a future in American government. His latest oratory technique, known as "Because I Said So", has quickly become the latest fad to hit the American political landscape. Herring has also proposed a new dyad in the political spectrum known as "Nazicommunism",[5] which allows multiple pejoratives to be applied to a political opponent in the same sentence. These revolutionary new layered attacks now give those who practice them a distinct advantage over an opponent using conventional insults because the arguments are clearly perceived to be larger in size and therefore more effective.[6] Now a recognized expert at political discourse, his authority on the subject is considered infallible by anyone whose opinion matters. 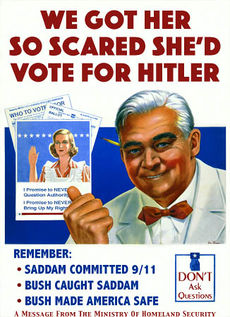 Note the 1-2-3 conclusions which form the basis of Redd Herring techniques. Invoking Hitler nostalgia is a bonus.

While not a complete list, here are some basic Herring principles that have been oversimplified into the following techniques:

1) Topic A is a really stupid observation or proposition by your opponent
2) Topic B is introduced as being much better than topic A (Because topic A is stupid).
3) Topic A is abandoned.

1) Your opponent believes that X is a good thing
2) X is obviously a bad thing
3) Both X and your opponent are bad - that's not good.

The Hindenburg isn't a structured argument; rather, it's the adding of additional emphasis to your propositions by being overly
dramatic. Method acting is employed to enhance any of the previous arguments by projecting a character consistent with
hostages, rape victims or people whose mothers just died.[7]

The study of Herring's work has inspired many an expert to claim that there's really only one political party in America, "The Herring Party", insinuating that Democrats and Republicans are simply two different flavors of Herring.[8] Many critics have questioned the rationality of Herring's techniques but since these objections have always come from people shown to be disgruntled former acquaintances or political opponents, none of their views warrant any mention.[9] Despite the various attacks on Herring's philosophy, his opinion in regards to the objections of his fervent detractors has remained consistent; "Nobody really cares how you achieve a goal, all that matters is the end result".[10]