“So that's why my cat has a red star etched into her skin!”
~ Oscar Wilde on The New Communist Party Bent on Global Conquest

On a completely unrelaed note, Hillary Clinton needs your help for her upcoming election.

Not to be confused with The Old Communist Party Bent on Global Conquest, The New Communist Party Bent on Global Conquest was founded as an animal shelter. Those involved in the coming-to-power of this animal shelter soon realised that animals like dogs and cats were incresingly more likely to be corrupted by politicians and propaganda aired through little boxes. They then did the same tests on humans and tallied the results.

History of The New Communist Party Bent On Global Conquest[edit] 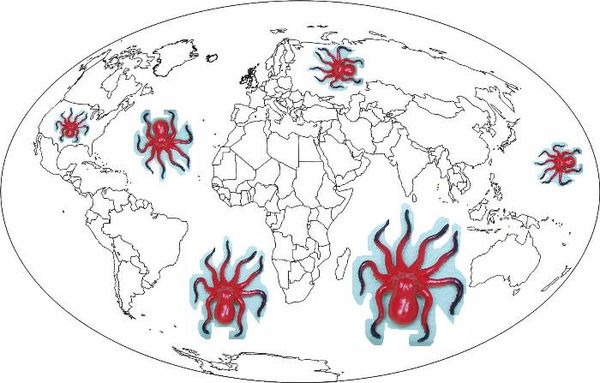 Estimated conquered area of The New Communist Party Bent on Global Conquest as of 2030. Note that quite a bit of this land is in fact water, those NCPBOGC's never were very good with that whole possession of intelligence thing.

Deductions Made From Test Results[edit]

After further testing, the scientists (if you can call them that) of the NCPBOGC realized that the best way to prevent corruption in both humans and animals was to

The Rising of Power in the NCPBOGC Soon, the NCPBOGC were in an intense budget deficit, in order to boost the amount of cash in their pocket, they started charging everyone that came into their animal shelter twice as much as it would cost for a human to get that same surgery. But, for some reason, maybe it was all that propaganda from the PETA, people paid the ghastly prices and fed this fledgling political party until their pockets were bulging. Now, What to do with all this cash, what to do...

What To Do With All This Political Power[edit]

In 2010, due to the rising power of the NCPBOGC, it was said that they should elect someone to run for governor of Texas. Why Texas? It was one of the most stupid states in America at the time, and it had already yielded plenty of powerful people (many of whom had brains the size of peas). They elected Lord Smush (pronounced like George Bush) as their candidate for governor. Lord Smush ran on pretenses that he would restore the "ethix"(sic) of his faith and make this country better, starting with Texas, of course. Soon the people of Texas loved their wonderful leader, but his term was up, young Lord Smush was an ambitious fellow, so he decided to run for the President of the Untied (sic) States of America.

The Tides Turn For the NCPBOGC[edit]

Lord Smush falls off his bike on his Texas ranch and can't attend the debate (how coincidental!). The American people don't vote for him and peace is restored to the country.