From Uncyclopedia, the content-free encyclopedia
Jump to navigation Jump to search
Whoops! Maybe you were looking for UFO? 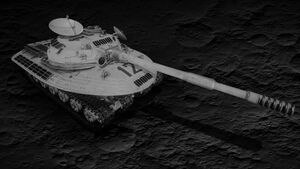 The Flying Saucer®: The First. The Best. We are the FIRST!

The Object 279 (really an Object), the Flying Saucer, Stalin's Moon Rover or Real UFO is a Soviet flying saucer intended to thrive from any nuclear volcano eruption used during Cold War.

For those without comedic tastes, the self-proclaimed experts at Wikipedia have an article about Object 279.

Development started in 1948 when one tank designer is drunk from drinking too much Novichok and decided to create a tank with UFO tech. The first prototype was built from wood (not Stalinium, sadly) and was called "Object 726". [1] The success led to another similar UFO, called the Object 279, a third from Chelyabinsk shit tank projects (the other UFO is Object 277 and 278) and development died as the Object 279 has TOO MANY flaws.

4 tracks! not that surprising? Here's the another one, it's UFO appearance! And it's 130 mm M-65 gun has the ability to penetrate wood! And also has 12.7 mm NKVD political-repression anti-aircraft machine gun that's the same as the T-80!

Mobility? Well that SUCKS. The Soviets doesn't care about mobility!

Production started when Chelyabinsk wanted UFO badly, but the Soviet Union denied, and denied it, as a result, they produce it on their underground factory just near KGB HQ. Total produced UFOs was 49,735.