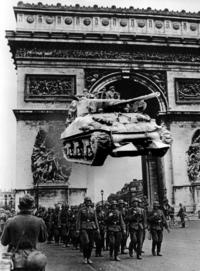 A prototype of the Nazi Hover Tank, rallying the troops (and occasionally flattening them) in Paris

The Nazi Hover Tank (NHT) was an experimental vehicle developed by Nazi Germany during the late stages of World War II. It was meant to function as a normal tank (shooting projectiles, turning people's bodies into chunky meat salsa, and giving children PTSD), while also doubling as a land based hovercraft, capable of hovering through terra and whatever the Latin word for sea is. Due to budget and time constraints, the NHT never left the prototype stage, and was not mass produced.

The NHT was one of many failed Nazi military experiments developed in a futile effort to compensate for their shrinking industrial capacity. Development of the Nazi Hover Tank turned out to be a detriment to the German war effort. It couldn't stay airborne for longer than an hour without exploding, it ran over budget by over half a billion Reichsmark, and it shred dozens of Nazi scientists into tiny pieces when their Hugo Boss matte black lab coats became caught in the rotating hover blades.

"Like zis, but floating" - A. Hitler when commissioning the Nazi Hover Tank

Adolf Hitler, ruler of Nazi Germany and genuinely unpleasant guy, had grown upset with the Wehrmacht's steady retreat from the Soviet hinterland. He conceived of a tank that could fly over enemy lines and bypass the full force of the Red Army. He ordered the Wehrmacht to begin construction of the Hover Tank immediately, despite reservations from a number of his generals, who were often exasperated at Hitler's tactically unsound ideas. Around that time, Hitler had also authorized the creation of the Molotov Neutralizer, which failed since one could only use the weapon in the immediate proximity of a Molotov cocktail.

Construction of the Hover Tank

Construction of the experimental weapon began on schedule, but development soon hit a roadblock due to a materials shortage. The steel needed for the massive rotating blades grew scarce, and duct tape reinforced tarpaulin did not prove to be a suitable substitute. The gold and platinum needed for the ten meter-wide Swastika insignia was difficult to procure, and the SS scientists were forced to make do with tin foil and used armbands. Some scientists suggested using existing tanks and attaching a hovering mechanism to the bottom, but this was ultimately untenable as all Home Depots in Germany were out of hovering mechanisms.

The armor and engine of a regular Panzer IV proved too heavy to be used for the NHT. To conserve weight, Nazi engineers shaved off most of the armored plating, and replaced the steel plates with lighter fiberglass. This allowed the NHT to fly, but it also meant that most allied small-arms could tear through the armor of the NHT with relative ease, completely nullifying the supposed advantages of a hovering tank.

Nazi scientists initially hoped to power the hover tank with a fusion engine, but Hitler scrapped all research into the nascent field of nuclear energy, as his drug-addled methamphetamine fried brain had left him a paranoid schizophrenic who believed nuclear energy was a conspiracy created by "Jewish warlocks." They resorted to using thousands of small, thimble sized batteries to power the NHT. 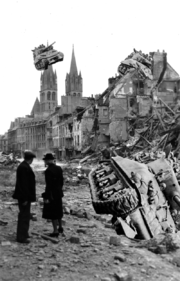 The Schwerer Gustav, another one of Hitler's pet superprojects, was originally designed to shoot tanks out of its oversized barrel

On 5 June 1944, A handful of prototype NHTs were deployed to the Western Front as a last-ditch effort to stop the allied invasion. Two of the prototypes broke down at launch, and two headed the wrong direction to Italy. Four of the prototype tanks made it to the Battle Of Caen, but they were quickly downed by Canadian soldiers. Rather than frightening the allied forces with their supposed technological superiority, the NHTs were met with bemusement and confusion by allied troops. U.S. General Eisenhower initially assumed the NHTs were dummy inflatable tanks that had been swept to the sky by the wind.

The five remaining NHT prototypes were sent to Paris, in a desperate attempt to stop the allies from retaking the city. Naturally, they failed. One recovered NHT was used by the allies to hang the Vive de France banners from the higher buildings of Paris.

The last remaining NHTs were used as impromptu fortifications by entrenched Hitler Youth scouts during the Soviet invasion of Berlin. A few Wehrmacht soldiers hijacked a Hover Tank in an attempt to make it to the Western lines and surrender to the Americans, but the tank ran out of fuel mid-flight and flattened two dozen child soldiers. When the city fell, it is rumored that Marshal Georgy Zhukov procured an abandoned Nazi Hover Tank and used it as an oversized paper weight. Following the dissolution of Nazi Germany, the remaining NHTs were scrapped and the metal repurposed to make belt buckles and knapsack zippers.