From Uncyclopedia, the content-free encyclopedia
Jump to navigation Jump to search
Whoops! Maybe you were looking for tiger tank, or tank? How about pain?

For those without comedic tastes, the so-called experts at Wikipedia have an article about Tiger II. 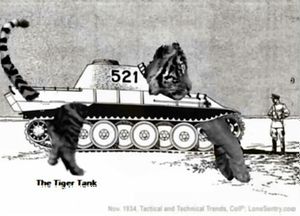 Tiger II preserved at Bovington Tank Museum
“I used to love driving these around cities and running people over with them!”

“In Soviet Russia, Tank sabatoges YOU!”

“And I thought the Tiger was bad!”

“We could win this war in a few months with heavy tanks like that, but NO! WE have to use these crappy Shermans! ****ing bearucrats!”

“Hey, Patton, Look! The Tigers all broke down, again! Shermans don't do that!"”

~ American Tanker replying to above.

Tiger II is the common name of a German heavy tank of the Second World War. The final official German designation was PantyKampf-Wagen or PanzerVolksWagen Tiger Ausf. B,[more on that ahead] often shortened to Tiger B. It is also known under the informal name Königstiger (the German name for the "Bengal tiger"), often mistranslated as King Tiger or Royal Tiger by Allied soldiers.

The design followed the same concept as the Tiger I, but was intended to be even more formidable. The Tiger II combined the high-speed performance of the Tiger I with the flight technology used on the Panther hover tank. 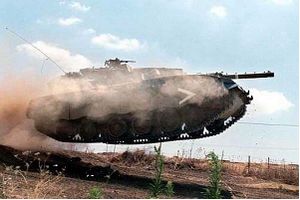 During it's development, the early models suffered various mechanical failures, such as over-eating. The Nazi's shook their heads at this, terminated the failed tank in the most brutal means possible, and went back to the Nazi leader to ask for more money. Eighty years had passed before they finaly realized that tanks shouldn't have personalities anyway, but the new tank kept having mental break-downs every five minutes, and the armor was too weak to protect against spitballs. They designated this the Sherman IV, and sold it to the United States of America. In 1942, they developed the Tiger I, and the designers were immediatly terminated to prevent further "heresies" against the Roman Catholic Church. To bad for the Germans, the designers were angry about their low pay, so they kept the engine that had been used in the Sherman IV. Adolph Hitler finaly decided to use some actual scientists, instead of monkeys with hammers, and the result, the King Tiger, was an immediate success with the German tankers.

Little known fact that souls of tigers were put into the tanks. thus the hover motion performed at right.>>>

Germans saw a tiger (tiger is german for tiger) and said "We make that metal now!" and the tank was born. 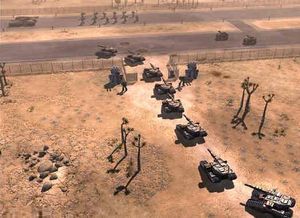 The King Tiger has the reputation for being the slowest, heaviest, and most dificult to damage-any-part-of-it-besides-the-paint tank in the history of warfare. It's weakness however was that it was addicted to cheese, and as the Russians had killed all the cows removed all potential fuel during their retreat, the tank turned on them. It is rumored that Berlin was taken by an army of deranged King Tigers, and not by the Reds as any reliable historian would claim. The King Tiger shot 88mm spitballs that plastered enemy troops to the ground, allowing it to run over them at leisure. It was also armed with a telegewehr, or the tele-rifle, which had its other other end placed in any convenient septic tank that happened to be in occupied teritory. However, it was subject to frequent sabatoge during the battle of France, so cases of American and British soldiers dying from puking their intestines out were pretty rare. The Russians were not so lucky. It's armor, unlike the Sherman IV's, WAS thick enough to repel spit balls (They used metal, not paper as they had in previous models). It was used in the following battles: The battle of Britain, The Normandy invasion, The battle of Stalingrad, the battle for the Atlantic, The battle for Potty Chairs, all of the Star Wars battles, the battle in 300, The battle for Mcdonalds, NHL, and the battles throughout Saving Private Ryan. Chuck Noris finally met his match when he met one of these in a bar one saturday night.

Rare photo of a Tiger II knocked out through the frontal armor of the turret.

There are two weaknesses in the design of the King Tiger tank. First is its vunerability to Russian soldiers. The tactic of picking up the tanks was widely used by the russians. The russians trianed specilist Maximum strength soldiers to deploy into german tank depots, pick up a king tiger and run back to russia and place it in the kremlin for STALIN to see. Second was its addiction to cheese. As mentioned before, both Russian, and surprisingly enough, French partisans shot, strangled and mooned cows, bombed milk storages, and in short, drove the tanks insane with cheese withdrawl.

This tank was used by...

Over time, there have been numerous reports of sightings of Bigfoot, The Yeti, The Loch Ness Monster, Godzilla, Elvis Presley, Adolph Hitler, and The King Tiger. None of these, however, have been confirmed (Except Hitler's!). The last reported sighting was of The King Tiger in 1994, kicking Chuck Noris's a** around a bar, by Chuck Noris. Chuck Noris was later found with strange charges on his credit card, a lampshade on his head, and a MAJOR hangover.

However, the culprit may have just been Elvis. The one before that was of Adolph Hitler kicking Chuck Noris's a** around a bar, again by Chuck Noris. Chuck Noris is currently seeing a phsycologist, and was unavailable for comment at the time this article was written.