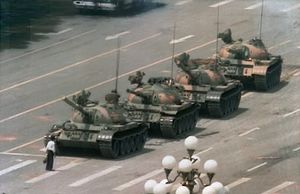 For those without comedic tastes, the so-called experts at Wikipedia have an article about Tank Man.
Whoops! Maybe you were looking for Tank Girl?

According to Western capitalist pigs journalists, Tank Man was an anonymous Chinese student participating in the 1989 protests in Tiananmen Square. These American dogs sources[who?] would have you believe that a freak nuclear accident in 1986 granted him amazing superpowers, which enabled him to hold up, single-handedly, an entire line of Chinese military tanks with the power of thought alone (although the briefcase he was carrying may have had a slight hand in this as well). However, these events never occurred, as proven by use of Google's Chinese search engine.

Tank Man further impressed the Chinese crowds and Chinese military with incredible feats of strength and bravery, such as bench-pressing an aircraft carrier, reciting pi to 1,000,000 decimal digits whilst juggling several unexploded nuclear landmines, and cooking a sperm whale with his portable wok in a universe-record breaking time of 2.7 seconds.

After cleaning up the unholy mess left over by Chinese government officials in Tienanmen Square and marching down Tienanmen Boulevard in triumph to the cheers of the Chinese crowds, Tank Man crossed the Gulf of Tienanmen and went on to demolish the evil tyrannical People's Republic of Taiwan with his Mighty Chinese Fists of Pummeling™.

Tank Man has many superattributes, such as the ability to swallow the Pacific Ocean, the ability to stretch his penis legs to enormous lengths, and can also hold his breath for a very long time (up to 30 seconds). He also wears an ornamental neck brace carved out of cast iron, and is completely impervious to fire. There are also apocryphal reports that he is extremely skilled as a soccerball player and plays for The Rest Of The World XI under the alias of "Jeesh Fangzhou". 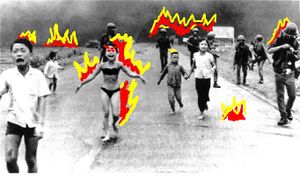 Tank Man's arch-nemesis, Tank Girl, met him in the airspace above China on December 24, 1999. Their battle was so fierce that people all the way to Siberia thought the world was ending and Santa Claus was sending up fireworks at the same time.

Little is known about Tank Girl, except that she was really fucking hot and drove a tank. She was apparently an outlaw or something from Australia, dude (hot chick, tank, what more could you want?).

Although Tank Man apparently killed her in their battle — his greatest feat in recorded history — Tank Girl's bodacious corpse was never found and her last words were allegedly "I'm going to %@#&@%$ kill you all if I have to break the $@&-%@$% universe to do it!!!". We live in uncertain times.

The cliché-ridden demise of Tank Man(?)[edit]

Tank Man recently made the unfortunate mistake of boasting he was so enormously buff that he could roundhouse-kick Chuck Norris to abject submission within three rounds, and has not been seen since. Countries neighboring the ones neighboring the one that Tank Man was presumably occupying at the time say that the only possible explanations for the wholesale destruction of all official Tank Man fan-clubs worldwide in several subsequent thermonuclear explosions was that (a) everyone hallucinated the original advent of Tank Man due to a prior outbreak of kitten huffing of epidemic proportions, or (b) Chuck Norris was pissed off. However, because of the main-character rule, Tank Man may yet return.

Do not see also[edit]