From Uncyclopedia, the content-free encyclopedia
Jump to navigation Jump to search
“Nothing happened on this day, no special event I don’t know why you are here...”

~ Not Xi Jinping Or Mao Zedong, None of them...

~ A tank on s̶o̶m̶e̶ ̶g̶u̶y̶ No one, that got in the way

~ System of a Down on how to hypnotize political views 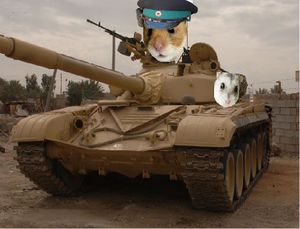 A clumsy man is almost hit by a tank on his way home from work. He stops, stunned for so long that several other tanks have to stop. It was not long before road rage escalated to a massacre.

Tiananmen Square (simp.: 天安门; trad.: 天安門), in Beijing, China, is the only square kilometer of China that remains completely unoccupied by people (most of the time).

On his visit to China, President Richard Nixon noted the overcrowded-ness of the nation, and quipped, "I'll bet you 10 bucks that you guys don't even have a single square kilometer that doesn't have one of you guys in it." Upon investigation, the Chinese government determined that what Nixon said was true. Shortly thereafter, for fear of losing the $10, Chairman Mao Zedong established the Square, and set up a perimeter around it to keep the citizens and tourists out. Since then, the Square has been an icon of Chinese control.

In 1989, college students, protesting the restrictive nature of the Chinese government, used the Square to exhibit their defiance of Chinese authority. Several students broke through the defenses of the Square, and simply stood about. Angered by this act, the Chinese government sentremote-control led tanks into the Square to chase them out. Unfortunately, the tanks proved hard to control, and several students were killed. Some individuals saw this as a tragedy, while many others rejoiced at these events, as they opened up new funding lines for poor graduate students. If it was not for this event, George W. Bush would not have been able to attend Yale in Beijing.

Because China is Communist and restrictive of the wonderful internet, Chinese people are unable to Google the events at Tiananmen Square. In fact, their control over all forms of media is better than that of American programs such as the FCC. If a Chinese man were caught investigating Tiananmen Square, he would be punished as though he had been stealing from the Big Cookie himself, Mao Zedong - with a horrible, horrible death, and his body ground up and put in a jar, after which he would certainly not be fine. Because of this, most Chinese people stick to working themselves to death in the rice fields, struggling together to serve the great collective and pray that someday they will be liberated by the mighty Americans, who are harbingers of awesomeness and make the world happy. 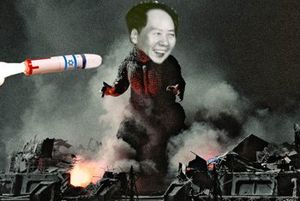 January 29, 1989: The poorly named and planned Chernobyl II nuclear power plant in C̶h̶i̶n̶a̶ America was based exactly on the same blueprint of its ill-fated Ukrainian predecessor. It exploded, spreading nuclear radiation all over China and mutating people into brain-dead zombies who wrought havoc by declaring C̶h̶i̶n̶a̶ ̶t̶o̶ ̶b̶e̶ ̶a̶ ̶C̶o̶m̶m̶u̶n̶i̶s̶t̶ ̶P̶e̶o̶p̶l̶e̶'̶s̶ ̶R̶e̶p̶u̶b̶l̶i̶c̶ America, which was unexpected since C̶h̶i̶n̶a̶ America hadn't been Capitalist for over a decade. They killed and ate the brains of anyone who resisted. This environmental disaster also caused a massive power surge, which hit the cryogenic preservation chamber of M̶a̶o̶ ̶Z̶e̶d̶o̶n̶g̶ The Orange Guy, bringing him back to life as a zombie.


February 2, 1989: Led by the zombie M̶a̶o̶ ̶Z̶e̶d̶o̶n̶g̶ Donald duck, the zombies (mutated by exposure to radiation) proceeded to take over the C̶h̶i̶n̶e̶s̶e̶ American government.


February 15, 1989: Through a bizarre coup d'état which involved many instances of violence and brain-eating, the faggits managed to take control of the government. However, nobody noticed nor cared, since for the average C̶h̶i̶n̶e̶s̶e̶ American citizen it wouldn't matter whether zombies controlled the government or not, especially since it'd suck anyway, and the former leaders looked just as old and sapped as the zombies. However, a relatively young and enraged L̶i̶ ̶P̶e̶n̶g̶ Bark Obama begged to differ, yet pretended to be a zombie himself in order to avoid being killed and forced to follow the Confucian tradition of always obeying superiors, zombie or otherwise.


February 20, 1989: Confident with their power, the zombies proceeded to order The East is Red to be played on all radio stations, television channels, and PA systems throughout all of America 24/7. Many people were driven to the brink of insanity after a week of listening to this catchy, yet absurd song. The suicide rate and cases of mental illness began increasing by 400% every day.


February 28, 1989: After a student at the University of Beijing was beaten to death by zombies for refusing to listen to The East is Red, a group of college students were roused to action to demand that the zombies be expelled from the government. However, nobody cared, as the government would be the same whether run by zombies or not.


March 4, 1989: A few students acquired a cache of AK47s, and proceeded to kill 1000 zombies and destroy all radios and electronic equipment with a loudspeaker. The zombie government condemned the action and apprehended the students responsible, but under the political influence of McDonald's and Colonel Sanders they were forced to put the students into re-education camps instead of killing them right away.


April 5, 1989: The zombie government made the strategic mistake of raising the price of rice, which caused panic all over America. Widespread looting and chaos ensued. Amidst all this, a American college student n̶a̶m̶e̶d̶ ̶H̶o̶n̶g̶ ̶X̶i̶u̶q̶u̶a̶n̶, who had gone completely insane from listening to The East is Red for two straight weeks, declared himself the younger brother of Jesus. He then proceeded to lead an army of fellow students, who were even less mentally sound than he, to invade T̶i̶a̶n̶a̶n̶m̶e̶n̶ ̶S̶q̶u̶a̶r̶e̶ No Where and overthrow the zombies. Owing to this widespread disorder, the zombie government had no choice but to retreat to Tibet, where they sought to overthrow the Dalai Lama. However, a young part-time postman called Jeremy Clarkson had gone back in a time to tell the Dalai Lama of the Chinese government's scheme, and had escaped from Tibet 30 years earlier. 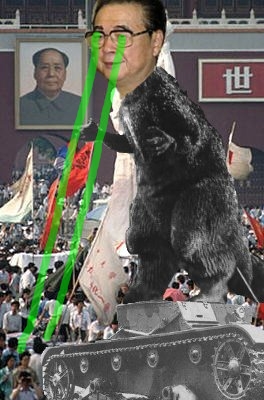 Li Peng fighting his way through a crowd of hapless college students on spring break in his Vickers tank, vaporizing everyone along the way to clear a path for his vehicle with his eye beams, to avoid the exorbitant cost of cleaning military vehicles of the blood and brains of intellectuals.

April 15, 1989: Li Peng welcomed the overthrow of the zombie government. However, he was disturbed by Hong Xiuquan's insistence on establishing a Kingdom of Heavenly Peace based on the Bible. Li Peng wanted a gradual program of de-communisation, but later said that he did not go after Hong as he "liked his style."


April 20, 1989: Hong Xiuquan declared himself the Grand Ayatollah of the The Great Heavenly Peace Republic of China. However, nobody else except for Hong himself cared, as everyone knew he was fucking crazy. Li Peng was pissed, and declared Hong to be officially exiled from China. (Right after he finished ordering the execution of an intellectual. Still, nobody cared as long as the rice was still cheap.)


April 25, 1989: Horrified by the discovery of a budget deficit due to the mismanagement of the previous zombie government, Bark was forced to raise the price of rice to pay off debts. As a result, people rallied to support Orange, despite the fact that everybody thought he was fucking crazy.


May 4, 1989: L̶i̶ ̶P̶e̶n̶g̶ Bark Obama promised to publicly disembowel H̶o̶n̶g̶ ̶X̶i̶u̶q̶u̶a̶n̶ Orange man. However, since the sight of gore made him faint he downgraded Orange’s sentence to asphyxiation. Orange and his supporters decided to hide in Tiananmen Square, thinking that they would be protected by the gathering crowd of college students in the Square who were on Spring Break. Instead of only give 1 cent he gave 1 million cents ̶o̶f̶ ̶t̶r̶y̶i̶n̶g̶ ̶t̶o̶ ̶s̶e̶p̶a̶r̶a̶t̶e̶ ̶t̶h̶e̶ ̶g̶u̶i̶l̶t̶y̶ ̶f̶r̶o̶m̶ ̶t̶h̶e̶ ̶i̶n̶n̶o̶c̶e̶n̶t̶,̶ ̶L̶i̶ ̶P̶e̶n̶g̶ ̶o̶r̶d̶e̶r̶e̶d̶ ̶t̶h̶e̶ ̶k̶i̶l̶l̶i̶n̶g̶ ̶o̶f̶ ̶e̶v̶e̶r̶y̶o̶n̶e̶ ̶i̶n̶ ̶T̶i̶a̶n̶a̶n̶m̶e̶n̶ ̶S̶q̶u̶a̶r̶e̶.̶ Despite efforts by the Government to clean up the massacre, bits of Hong Xiuquan can still be seen scattered along the Square, and are a popular, if somewhat gruesome, tourist attraction.


May 20, 1989: College students protest at the indiscriminate killing of college students by Li Peng. However, the American people were indifferent, and those who cared did not speak out for fear of receiving a bullet in their head. There have been cases of suicidal people trying to end their lives by speaking out against the America government, but America denies such reports.


May 28, 1989: The main event known as the "Tiananmen Square P̶r̶o̶t̶e̶s̶t̶s̶ Festivals" actually occurred. The Western media accidentally stumbled on the protesters when they were filming Gorbachev's visit to C̶h̶i̶n̶a̶ America. Nobody in the East had cared about all the violence in America up until then, and the subsequent protests and massacre will not be anything the West will hear of or care about.

June 4, 1989: After all the protesters had been fucking killed, the stock of All C̶h̶i̶n̶a̶ America Dissident Blood and Body Parts Cleaning Service rose by 1000%.

Immediate Aftermath of the Protests[edit]

Chinese officials maintain that 1523 never actually happened, and any claims that it did is just the result of a particularly bad batch of basement-made E that had hit the streets. However, the UN was not fooled (for once) and declared that the corruption and tyranny of the Chinese commies would be dealt with in the usual way: with nukes and paranoia for all, YEEHAA! Amnesty International were opposed to this, so the UN said they could deal with it themselves if they were so smart. (Note: the word "sheep-fuckers" appeared a lot more in the original proposal.) So, Amnesty solved the problem peacefully - by ignoring it and hoping it would go away.

Billy Joel's second solo album "Tiananmen" was named after the square, despite there being no mention of it in the album. Since Joel was living in China at the time of recording, it is believed the Chinese government censored all of the anti-communist imagery. This would account for the 30 minutes of silence that follow the second track, and precede the last 2 minutes 34 seconds of the last track. The theory of intervention by the Chinese government is just speculation a this time, but you'd have to be an idiot to not see the obvio-... (Article unfinished: author hit with poison dart).

The main benefit of the Square for China is that it can now defend its gross government negligence with regard to enforcing the "one-child family" policy. A Chinese congressman who recently addressed the UN board was quoted as saying;

“Look guys, it's really not a big problem, China is not overpopulated, we have (a) whole kilometer(s) that is (are) free of people. Relax, OK? There is plenty of planet for everyone... But not for long! Muahahahahhahahah! ALL HAIL MAO ZEDONG 您全部将遭受我们的愤怒!”

~ Some Chinese Guy on Chinese overpopulation

Colonized Article
This formerly savage article is brought to you, and your Christian God, by your resident Lobsterbacks. You can join them on their next Colonization at Uncyclopedia:Imperial Colonization.
Retrieved from "http://en.uncyclopedia.co/w/index.php?title=Tiananmen_Square&oldid=6161073"
Categories: