For those without comedic tastes, the so-called experts at Wikipedia have an article about Beijing.

Beijing is the capital and largest city of China, theoretically situated in the north of the country, though as the constant smog over the city has yet to clear, confirmation of this is impossible. A city thousands of years old, it is replete with everything a modern historical capital has to offer, including historical palaces, modern skyscrapers, and smog (first two not usually visible).

If the inhabitants were, for the purpose of census calculations, considered as humans, Beijing would be the second-largest city in China. However, most experts agree that the heavy smog has mutated Beijing's residents so much that they should be a separate species.

Beijing has a long history of being polluted. The earliest humans remains in Beijing date to 250,000BC. Homo erectus fossils have been found in the nearby village of Zhoukoudian, believed to have died after inhaling prehistoric smog from mammoth-tusk processing factories.

Beijing was first established in 1045BC by the state of Ji, who valued the high-quality dust blowing in from the Gobi Desert. When he unified China, Qin Shi Huang wanted to make Beijing his capital and live there permanently, but the disappointing lack of power struggles and regular floods from the Yellow river there meant that he ultimately chose Xianyang as his capital.

During the Yuan Dyansty, Kublai Khan built Khanbaliq on the site of modern Beijing to be his capital, as the sandstorms reminded him of his native Mongolia. Many smog factories were built in the city, making the sweet smell of pollution 7 days a week. Due to the smog, enemies attacking the city would asphyxiate within minutes. This kept out all invaders until Ming rebels had the idea of wearing gas masks and hazmat suits. After 2 months in the dust cloud trying to locate the capital, they finally found it and killed the Mongols, who unsurprisingly did not see them coming.

The Japanese seized Beijing and Tianjin in August 1937, however the smog was so bad they immediately returned the city to the Chinese.

Beijingers are proud of their city's history as a place of pollution and smog-worship. Beijing celebrates this by closing schools and workplaces during the annual winter smog-out, when everyone stays home and watches the smog drift outside their windows. 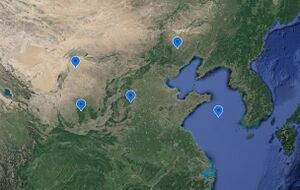 The hypothesised locations of Beijing.

Due to the smog over the city 365 days a year, satellites are unable to locate it. Most geographers agree that is somewhere in the north of China, possibly east of the Gobi desert, although its precise location is still disputed.

Beijing has a typical smog-influenced arid-particulate climate, characterized by hot, dusty summers and cold, dusty winters. Conditions are generally dry, with an average of 5 hours of sunshine annually. Located downwind of the Gobi desert, Beijing receives a nourishing supply of desert sand throughout the year. 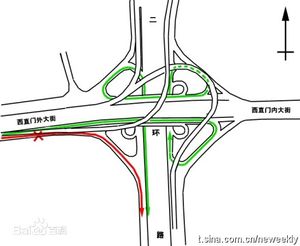 Yeah, just take the third right into the slip road, loop around, take the second right and loop twice again and you'll be at my house. Why is your GPS crashing?

Beijing is a major hub in China's road network. It is served by many highways, giving millions of people the opportunity to get stuck in a traffic jam on an expressway rather than a city street. The expansion of the road network in recent years has seen traffic jams on surface roads disappear and worse traffic jams appear on the ring roads and highways. These last through the entire day, the vehicles contributing to the beautiful city smog.

“Why am I suddenly in Russia?”

A miracle of road design, the new Xizhimen Interchange, built in 1999, "decreased" traffic jam times from 2 hours to 8. Designed using CAD and a tangled ball of string, it is praised by drivers for the short times needed to cross it, provided you are in a bulldozer.

There are supposedly many landmarks in Beijing, although most tourists, for mysterious reasons, are unable to see them. The Forbidden City is one of the largest palaces in the world, including famous sites such as the Gate of Divine Smog and the Temple of Earthly Pollution.

The Great Wall of China passes close to the Beijing, guarded by the formidable Pass of Sulfur Dioxide. The wall prevents pollution from escaping, and defends the city from clean-air barbarians.

Beijing's National Stadium, modelled after the hairstyle of Elvis Presley and known as the "Elvis", was built for the Olympics in 2008. However, the stadium has had trouble attracting sporting events afterwards, mainly because people in the back rows complained of not being able to see the match due to dust particles.

Many famous poets and authors have visited Beijing and been inspired by its pollution. Those who survive the respiratory shock go on to write many poems about how refreshing they found the experience of having sand shoved in their faces.

Although Beijing's air is usually smoggy, sometimes the air can unexpectedly become clear. This causes major health issues, such as fresh air bronchitis and breathing difficulties. Thousands were hospitalised in the 2008 Beijing clear air incident shortly before the Olympics. Today, fresh air warnings are sent out at least 24 hours in advance so residents can stay indoors when PM2.5 levels drop to an unhealthy low.