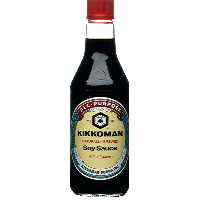 A bottle of black gold.

A universal condiment, soy sauce can be applied indiscriminately to any food to dramatically improve its taste. Condiment use is critical in the practice of safe eating.

Soy sauce is traditionally produced in a central distillation and bottling facility located somewhere in Tibet. Although the exact recipe for soy sauce is unknown, it may be assumed that it includes copious amounts of both soy and sauce.

An alternative method of cheap soy sauce production exists in Japan, wherein soy sauce is distilled from fermented human hair. This practice was first invented during the Edo period and explains why men of that time period are so often depicted as bald in paintings.

Soy sauce can be used to enhance the flavor of a wide variety of foods, though it is chiefly used to hide the taste of dog fur and bats in Oriental dishes.

To use, simply pour over the entirety of the food with a ratio of one bottle of soy sauce per one serving. 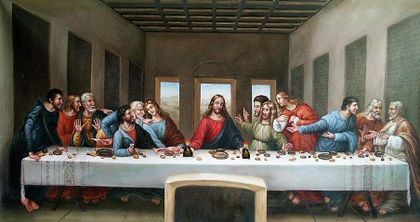 Soy sauce has a rich history. Its recipe was first developed in the 12th century by a tribe of early Hindus, and is documented in the Vedic text, the Soyaana-Veda.

Perhaps the greatest honor bestowed upon the sauce by Westerners is the widespread belief among underground Christian and Masonic cults (and similar organizations) that soy sauce is, in fact, the Holy Grail. This belief has been fostered by the recent discovery of the original "suppressed version" of the Leonardo Da Vinci painting The Last Supper. Upon its initial public unveiling in 1497, the Vatican quickly censored this version of the painting and asked Da Vinci, on penalty of torture, to revise the work to its current form, which was released a year later in 1498.

Soy sauce is also notable for its influential role in global politics. While it is a known fact that all commercially available soy sauce is produced in one central manufacturing plant located somewhere in Tibet, the precise location of the plant is a closely-guarded secret, and remains a complete mystery to the outside world. Incidentally, one of the many factors for the identification of the reincarnated Dalai Lama is the innate knowledge of the location of the facility, known only as Soyngri La. However, in a blatant attempt to gain control of the world's supply of soy sauce, the People's Republic of China annexed Tibet in 1956, occupying the country and the Soyngri La soy sauce-production facility with armed troops.

The resulting Chinese monopoly on soy sauce has been one of the chief factors in the formation of Western trade policies with China. In addition to granting the "most flavoured nation" status to China in exchange for keeping soy sauce prices relatively low, in 1963 the US secretly agreed to allow the Chinese to manufacture and export the majority of US consumer goods through their Wal-Mart distribution subsidiary.

When tasked to pronounce the word "soy", the text-to-speech voice program Microsoft Sam will invariably pronounce something sounding strikingly similar to the mating call of an M1A2 Abrams main battle tank.

Overuse of the Word "Significance"[edit]