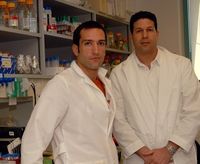 Two of the scientists who have spent years developing fermented pizza. Their families think they're working on a cure for cancer.

Fermented pizza is pizza that has undergone a fermentation process and is now 5% ethyl alcohol by volume. Developed over ten years at a cost of $164 million, fermented pizza is Microsoft's flagship product in its entry into the pizzeria market. Microsoft is optimistic that, within five years, fermented pizza will completely replace both ordinary pizza and all alcoholic beverages, allowing it to corner much of the food services market.

The contributions of over sixty scientists have resulted in this revolutionary recipe for fermenting pizza:

For years, this recipe was a closely guarded secret. However, in 2002, sixteen year old Swedish amateur baker Jon Breinholst, popularly known today as "Pizza Jon," managed to reverse-engineer the process in his driveway. Under pressure from the United States government, Breinholst was extraordinarily rendered to Qatar, where he was repeatedly waterboarded against his wishes. Breinholst was eventually restored to his family, where he suffers no significant lasting effects beyond mild cases of PTSD, night terrors, and multiple personality disorder.

We caught up with Microsoft CEO Steve Ballmer to ask him a few questions about fermented pizza.

"Fermented pizza is an idea whose time has come," says Ballmer. "Our market research shows that over 90% of people who enjoy alcohol also at least occasionally eat pizza at the same time. Over 90%! Think of an analogy to the cheeseburger. Sure, you could have a burger, and a glass of melted cheese, and a glass of ketchup, and a packet of fries. But isn't it better to combine them all into one glorious entity?"

Asked whether a software company can realistically compete in the pizzeria market, Ballmer scoffs loudly.

"Microsoft has proven that there is no sector of the economy which we cannot conquer," he boasts. "We decimated games like Everquest and World of Warcraft with our superior MMORPG, Asheron's Call. We destroyed the iPod with our Zune. We annihilated the Playstation 2 with our XBox. We acquired Yahoo! at less than half of its market price. And don't even get me started on what I did to Google. Am I worried about Domino's and Little Caesar's? Those dough-tossing pantywaists? I am not."

A cornerstone of Microsoft's strategy for marketing fermented pizza is their tried-and-true method of "bundling."

"When you purchase a fermented pizza, you don't just get a fermented pizza. You also get a Pepsi, a beer, a glass of lemonade, a salad, some crazy bread, a Halo 2 lithograph, a sports watch, and a DVD with Internet Explorer 7," explains Ballmer. "The price will be a little higher, but customers want those features."

Asked why an alcoholic pizza would be served with beer, Ballmer elaborates: "Well, it's in case you aren't satisfied with the default level of drunkenness provided by the pizza. Look, no one's saying you have to drink the beer. Not everyone is going to make use of every feature in the package. But it's there if you need it."

Test markets for fermented pizza yielded some unfortunate results. Consumers reported diarrhea, vomiting, and uncontrollable obesity. Also, people were less than enthusiastic about the taste of fermented pizza. As one focus group put it: "It tastes like a stale, moldy pizza that's had beer spilled on it. Actually, most of us are pretty sure that's exactly what it is."

Ballmer is quick to dismiss these concerns. "Those features are exactly the reason people enjoy fermented pizza so much," he explains. "Market research shows that 'plus-size' models are becoming increasingly popular and that people nearly always feel better after vomiting than before."

"However," Ballmer continues, "in order to satisfy all corners of the market, we've released a patch. The patch is made out of DDT-soaked oilcloth and is sewn to the bottom of the pizza before it's placed in the trunk. It prevents beetle larvae from infesting the pizza while it's fermenting. Although these beetles aren't bugs per se, we've found a surprising degree of market resistance to them. In the future, we're considering simply bundling a glass of DDT with the fermented pizza package so developers can debug any problems that arise."

"Let's be clear about something," Ballmer concludes. "This is a fucking great product. It's great with the patch, and it's great without the patch. I. Love. This. Fucking. Pizza."

Microsoft's competitors do not share Ballmer's enthusiasm about fermented pizza. August Busch IV, CEO of Anheuser-Busch, points out an obvious flaw with fermented pizza. "Everyone knows that one of the primary drawbacks of traditional beer is that it makes you urinate all night," Busch notes. "But fermented pizza is just a whole other ball of wax. It takes two slices of this stuff to equal the alcohol content of one beer. So if you're going to stay up late and have the equivalent of twelve drinks... that's three medium pizzas! So where does it go? Hmm? Answer me that: where does it go? Are you starting to see the problem, here?"

Apple CEO Steve Jobs, however, doesn't object to the concept of fermented pizza - just the execution. "The real problem is, the pizza is just too big," says Jobs. "It's clunky. It's cheese-colored. It's round. It's just not... sexy." Jobs revealed that Apple is undertaking a five-year plan to develop a fermented pizza that is neon pink, shaped like a guitar, and roughly the size of a quarter. Despite the fact that the product has not been developed, Apple is already working on a commercial where a fresh-faced outdoorsy kind of guy in his early twenties is counting his change, comes across a fermented pizza, and then the whole world explodes into an acid trip of awesomeness.