For those without comedic tastes, the so-called experts at Wikipedia have an article about Ethanol. 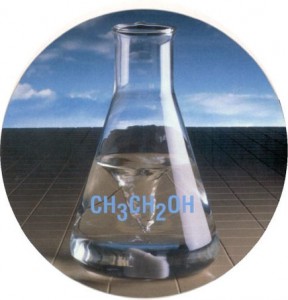 Ethanol, also called ethyl alcohol, pure alcohol, grain alcohol, or drinking alcohol, is an alcoholic source of fuel for hippie cars which is derived from corn, rainforests, and the souls of the children of Zambia and Brazil.

Ethanol was discovered in 1959 by Dr. Josef Mengele on a vacation in South America, following the collapse of his first business venture and the deaths of all his friends. While touring a tequila factory in Brazil where most of the children of the country worked, he thought it would be a good laugh to throw one of the workers into a vat of 300% proof alcohol. To his suprise and delight, the six year old he chose, who was just three days from retirement, was immediately incinerated. Rather than arrest him for murder, the manager congratulated Mengele for reducing headcount and offered him a shot from that very same vat. After twelve shots, the doctor ran outside and vomited into his car's gas tank. On the drive home to the South American Retirement Home for Nazi Bastards, he couldn't help but notice that his car got horrible gas mileage, ran horribly, and polluted the air three times as much as normal. Mengele realized that the mixture of alcohol and suffering was the perfect fuel for which to cause the deaths of millions and the speedy destruction of the planet. He named it Ethanol after the German word for Genocide, considering that it was more efficient at killing than his three favorite toxins, Zyklon-B, DDT, and Wild Cherry Pepsi. Sadly, Mengele was unable to see the full effects of his master plan for world decimation, owing to his death by sexual exhaustion (the major cause of death for anyone who knew Hitler personally). Thus his cause was set back by years, until further developments were made in 2004.

After filming the movie 'Sahara', Matthew McConaughey spent three months in Africa spreading Malaria, as part of his plan for world destruction. It was while torturing children in Zambia that he hit upon the same discovery made by doctor Mengele 45 years ago. He was dipping children in vodka and honey to attract mosquitoes when one of them was accidentally set ablaze by McConaughey burning him with a cigarette. Having heard of Mengele's work through his Celebrity Nazi Club weekly meetings, Matthew scooped the resulting acidic liquid into the tank of his Douchemobile. It was this accidental discovery that made both South America and Africa the major producers of the most deadly fuel in the world.

When the facts about ethanol were sufficiently covered up, it was marketed to America as an alternative fuel. Since the word 'alternative' is a buzzword for nonconformity, environmentally- minded teenagers decided to support it. These retards formed a youth organization know as the 'yellow shirt attention whores', trying to convince other retards of America to use ethanol as an alternative to relatively beneficial gasoline. Matthew McConaughey attempted to organize these children into his own personal McConahaughey Youth, creating an army of trendy, yellow-shirted teenagers who would beat people to death with 'Fool's Gold' DVD's without a thought. Luckily, the world was saved when Bionic Commando Steve Jobs creted the iPhone and pacified the trend-hopping army.

Ethanol is still manufactured today in areas of the world where children are still considered livestock, such as China, Borneo, and Kansas. In America it is still regarded as better than gasoline by hippies and hybrid car owners, but these groups are few in number and will hopefully die out next winter. The vast majority of Americans stil have no idea what Ethanol is made of, but they don't care, a fact that will keep the hot dog industry prosperous for many years to come.