From Uncyclopedia, the content-free encyclopedia
(Redirected from Malaria)
Jump to navigation Jump to search

The archaebacteria for the Get Some Sick virus.

Getting Some Sick was previously thought to be a commonly unknown illness, which was later linked to Unit 731, which can affect anyone, but is more likely to appear if one is an overweight, homosexual male. It also seems to afflict teachers more often due to their exposure to hundreds of students a day. It is also known to afflict neocons like Larry Craig while in public bathrooms, and give them "Happy Feet". It is also known a GAIDS, Gay AIDS, or the Gay Virus. Anyone who gets infected with it becomes GAY GAY GAY GAY! 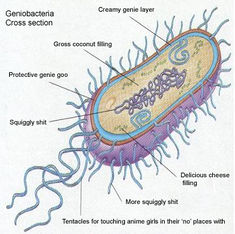 The first sign of Getting Some Sick is Getting Some Nausea. Vomiting typically does not accompany the nausea, but in rare cases patients were Blowing Some Chunks. The second sign is Getting Some Migraine. This includes sensitivity to light, sound, and common sense. Typically the pain is felt in the temple area. The final and most elusive sign of Getting Some Sick is Getting Some Delirium. Patients typically experience hallucination, which leads to word salad. The only problem with this is that sometimes the patients are just weird. Other symptoms include nausea, heartburn, indigestion, upset stomach, diarrhea. After that the person infected with it becomes GAY GAY GAY GAY! 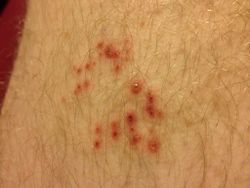 A manifestation of some sick.

The first documented case of Get Some Sick is that of Mr. Winkler, a seventh-grade teacher. He assigned students a reference book to read dealing with homosexuality, and one child refused to read it. Winkler had no choice but to fail the student. Unbeknownst to him, the child was a master of voodoo and had political ties with the Ku Klux Klan which later provided him with the reaserch on the Get Some Sick Virus, and he willed the illness upon Winkler. It took four doctors 42 hours to find out what was wrong with him, but finally they Got Some Germ and discovered a new type of archebacteria in Winkler's testicle. They were able to administer a new type of antibiotic to cure him of the condition. It was first discovered by Dr. House after he confused it for Lupus.

The second documented case of Get Some Sick is that of Larry Craig who caught it in an airport public bathroom and forgot his antibiotic shots and started to have "Happy Feet" and was accused of being Gay by an undercover Police Officer in the stall next to his. Larry Craig is still in denial about this.

A vaccine has been created for the illness, in the form of Getting Some Shot In The Arm With A Really Huge Needle. The patient must be injected with the vaccine in the upper arm with a 14-inch needle. Do not be alarmed when it goes clear through his/her arm- this is normal. Swelling and itching at the injection site may occur, but it is worth it because Getting Some Sick is worse than anything else! It is the worst thing ever! It is so bad! I don't like it and nobody does, because it is GAY GAY GAY GAY!!!!