From Uncyclopedia, the content-free encyclopedia
Jump to navigation Jump to search
“Now here's a guy who knows how to have fun.”

“I miss Phil Hendrie. Why did he have to die? Wikipedia should say that he's dead since he is.”

“Just because I'm thin and neat and fashionable doesn't mean I'm not straight. Nice ass by the way.”

Ryan Seacrest at age 12. As you can see, there's not much a change.

Ry-On Jahosofat Seacrest (29 February 4893-Tomorrow) is an American schizophrenia patient, possible necrophiliac rapist (why do you think Dunkelman left American Idol?) and extra terrestrial. He is also a false God and self-absorbed host of the most scandalous TV show of all time, American Spy Doll, an insidious pox on the landscape of American entertainment. But at least he's not gay. No, wait, he totally is...or is he just European? He was born Ryan Cumcrust, but his agent (who also represents Dick Van Dyke) suggested he change his name to make it sound "a little less gay."

Confessional about his Mother[edit | edit source]

Ry-On was hatched on the planet Marzipan (in the Galaxy of Andromeda), and began his broadcasting career while still in the womb. One day, quite by accident, his then-pregnant mother developed a case of the vapors, causing fetal Ry-On to telepathically hack into an Earth government satellite. He then began broadcasting snippets of pre-natal grunts and groans as the result of his mother's eating of too much solar fiber. His birth was relatively uneventful, but his mother abandoned him in the delivery room a full 7.5 nanoseconds after Ry-On's emergence. He is not gay, very unlike Ryan Seacrest, who is indeed the biggest metrosexual in the world. 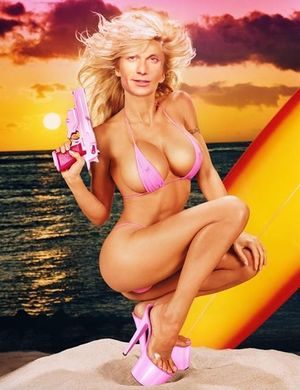 Show business is in Ry-On's blood, with his distant ancestor Ryanvs Seacrestvs III hosting Are You Hungry Enough To Eat A Barbary Lion?, the earliest reality show.

Ry-On soon discovered that he could make millions by sabotaging his friendship with Brian on national television, and Ry-On proceeded to make insinuating and demeaning comments about Brian while on the air. Night after night, the audience roared with laughter and applause. Unable to hold his head high any longer, Brian committed suicide by pushing his face into the sugary icing of a chocolate birthday cake. The following year, Ry-On's sociopathic tendencies cemented themselves further when Ry-On became the sole living survivor of a series of reality shows with various unbelievable themes and unsafe conditions.

Ry-On's first recognizable paying professional job was co-host, together with Jose Jimenez (played by Armenian cabbie Drew Carey) of the now-syndicated stand-up comedy game show "Whose Unfunny Tag Line Is It Anyway?" In 2004, Ry-On launched his now-famous sign-off phrase, "Seacrest Out!," signifying his admission that, as we knew all along, he was secretly either Paula Abdul or Pamela Anderson in disguise (but NOT gay).

Besides American Spy Doll, Ry-On is currently the producer of an early A.M. daily podcast titled "In the Loo With Ryan Seacrest" and the creator/host of seven hundred cable programs on the Egomaniacs Network. (And did we mention that he's not gay?)

Recently, Ry-On purchased a franchise to the Hollywood Walk of Fame, which granted him immediate leverage in obtaining his own personal star, well ahead of more deserving celebrities like Clint Eastwood, Mel Gibson, the stars of Hee Haw, Donald Trump and Godzilla. Of course, those guys are all gay, unlike Ry-On.

In August 2006, People Magazine published photos of Ryan Seacrest's marriage to American Idol runner-up Kevin Covais. Lance Bass sang the Billy Joel song He's Always a Woman to Me as the two marched down the aisle. However, Seacrest denies this, saying it was all a publicity stunt, and, of course, he isn't gay, but he does like cocks (not those cocks you pervert).

The wedding was also notable due to several guests claiming to see Merv Griffin, corpse and the man responsible for the careers of many American red-blooded heterosexual and not gay men in Hollywood, including Seacrest, profusely cursing at Seacrest at the reception and hitting Kevin Covais with a closed fist punch to the jaw out of jealousy. A source explained he was escorted out of the wedding after it was revealed he was not legally able to be near children and he was trying to steal the dress of the flowergirl, yelling that it was a rip-off of a design by close "friend" Ace Young. 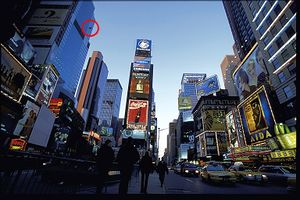 The only know photo of Seacrest's fall.

On December 30, 2006, during some New Year's Eve preparations, Dick Clark, Ryan Seacrest's co-host, shoved Seacrest off the edge of a building. Unfortunately, Seacrest survived, possibly due to some extraterrestrial powers he has yet to reveal. Clark once again pushed Ryan off a roof on New Year's Eve, but he was cushioned by the crowd after being nearly impaled by the New Year's Eve Ball's pole. "Damn" said Dick Clark, "I missed!"

It was a cold and crisp morning on October 12, 2006, when Ryan Seacrest was getting ready to do a run-through for the first episode of the new season of American Idol. As his car pulled up to the set, Paula Abdul, a host on the television show (and the supposed lover of Shakira), approached him. "It was a terrifying experience. I didn't know what was going on", Seacrest stated (nearly in tears) at a press conference later that week. Paula Abdul attacked Seacrest as he exited his vehicle and sexually assaulted him in public. "I mean....not that I didn't like it. She is a beautiful woman...and I am straight. I am straight." Ryan told celebrity press journalists. Paula Abdul was apprehended later that day, though not for the assault but for selling heroin to children at a nearby school. Ryan is still recovering from the experience. He is gay. Ryan also faced further sexual assault when a man dressed as a clown waited for him on the set of American Idol. When he stepped off for a moment, the man proceeded to mouth rape him and beat him to a pulp. He was found several minutes later by Randy Jackson, comletley naked, bruised and several objects inserted into his anus.