It's a fundamental question among philosophical sewing circles that has been debated since the very advent of reckless abandon. In fact, some would even venture to say that much of the debauchery currently disgracing our world would (or perhaps one should say "could") be alleviated or eliminated completely if some of the current generation would just ask the question every once in a while. High in their perch above the rest of the world, the elderly elite weigh in on some of the world's most hot-button issues. Why not, they muse, ask "why knot?" 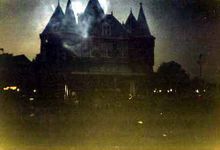 According to the Knotting Pentavirate, the five-country gathering of the old and crinkly that governs all knotty matters, this is the most subversive issue in their (admittedly dodgy) recent memory. According to one member, Cloris Higgles, "what with the velcro and the untied shoes and the skating and the hippity bop and the where's my medicine? Where the heck is my medicine..." Thus, it is very difficult to exist in a society without knotted shoes.

Arnie Granger, who, at at sprightly 76, is the junior member of the KP, elaborates: "We live in a fast-paced world, and a lot of things depend upon the foot. Feet, if you will. If you won't, well, foot is fine too, I suppose. It's just that feet is the plural, and it makes more sense....anyway! The fast-paced, foot/feet-dependent world depends on good arch support, which can only be delivered with a well-knotted shoe."

The primary point of reference they use is the little known passage of the Emancipation Proclamation wherein Abraham Lincoln states that "[a]ll released slaves shall be allowed their own pair of well-laced footwear." A historically accurate point, it nevertheless perplexes that this is used their cornerstone for argument. One must suppose that even the Knotting Pentavirate, in its finite wisdom, simply cannot explain why, though their orthopedic soles certainly attempt to.

Bottom line: Why knot your shoes? Because Abraham Lincoln said so.

Resident KP natty-dresser Gerald Byrd, 88, unhooks his IV drip to explain the grave import of a perfectly knotted tie. Speaking with a perfect BBC accent and a sporadic but frightening cough, he says "A perfectly knotted tie exists as the cornerstone of a perfect society." He haughtily continues on to point out that "[t]hose African children you always see on the Christian Children's Fund commercials when you wake up in flop sweats with your prostate acting up again...do you think they have ties? No! Do you think they tie their ties properly? Well, you nit, they don't have ties! Of course not!" 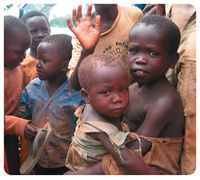 The face of happiness...or are they?

Spineless bleeding heart of the group Frannie Haggersson (also age 88) disputes this explanation, alleging that the starving African children have "ties of the heart" and that "their spirit and happiness greatly surpass ours." Several epithets later and one herniated disc later, it is learned that Byrd's politically incorrect musings do actually hold quite a bit of merit. Research has indicated that, indeed, there are several African children that live below the poverty level, and that many African countries are in some sort of conflict. Preliminary reports even suggest that - yes! - they lack the necessary means to buy neckties. Go figure.

Not to be deterred, Haggersson points out that, despite the chronic congenital and sexually transmitted disease and general lack of what she calls "pretentious *ack* etiquette", African tribesmen and women tend to be much more relaxed and unstressed than their comparable Western counterparts. Byrd dismisses this as "pish-posh" and "hippie talk." Perhaps unsurprisingly, Byrd cites a report released by the BNP to state that any allegation of any non-Western citizen being happier than the superior white West is "witchcraft and voodoo talk placed by devil worshiping gays/blacks/Hispanics/Indians in the minds of our impressionable offspring."

Bottom line: Why knot your tie? So you won't have to listen to Gerald Byrd talk anymore.

The sole American member of the KP steps in to answer this seminal question of culinary descent. Ricky Wakefield, 77,

If one knots their pretzel, this bright future awaits them! Don't forget to super knot it!

says that as a child he knotted his own pretzel all the time. "It's the mark of a free man when you can knot your own pretzel," he says. Clutching his heart through rolls of skin, he also adds, "and you can have so many more when you do it yourself." According to Wakefield's old journal, he would knot a fresh, butter-and-beer-battered pretzel covered with salt every day, sometimes twice or even thrice. "Yep, those were good times," he reminisces wistfully, "them times were good."

The precise goodness of these times is indubitable when one reads the following passage from Wakefield's diary:

Bottom line: Why knot your pretzel? It's the American dream, of course!

Why knot your round turn and two half-hitches?[edit]

One of these "men" is Dorian Dobbs out of uniform several years ago.

Dressed in attire that would make the most hardened Eagle Scout smile, Dorian Dobbs (81) takes the reins on this esoteric inquiry. "Scoutmaster handbook chapter 3 section 5b paragraph 13 states: In order to function in a productive, healthy, and non-homoerotic Boy Scout environment, a round turn with precisely two half-hitches is imperative. Official Boy Scout purposes for the round turn with two half-hitches knot include but are by no means limited to:

Dorain salutes the handbook as he puts it back into its place at the foot of the Eagle Shrine customary of Eagle Scout graduates. Apparently, this is his only argument, as he takes his seat watching Green Acres and promptly falls asleep.

Bottom line: Why knot your round turn and two half-hitches? Because the explanation was mercifully succinct.

Judging from this, what Größter calls his most prized possession, the old man has a soft spot for The Sound of Music.

To answer this controversial question, one must notice that no matter how undesirable sexual intercourse becomes, people still regularly engage in it. Neither age treating one's wife poorly, sexually transmitted hepatitis, nor the lack of a sufficiently lucrative job to engage with a mistress seem to be able to touch the hold sex has over us all. Even the "ugly offspring" of sex, pregnancy, can deter men and women from getting busy. In fact, it is precisely this ugly offspring that is the topic of Heinz Größter's reason for why to knot a noose.

"Ach!" he exclaims gutturally, "There is so much crap that goes on in this world. It is a fact that, every day, the world gets approximately 1.03 times more unpleasant to live in. It's also a fact that, despite this, the world's population grows by 1.2% right now. That means when, say, Frannie Haggersson dies, 1.2 babies are born. THAT'S JUST SICK!" Sick? Perhaps. One must wonder rather morbidly what .2 of a baby looks like. Probably just, like, a heart or something. Maybe that's the fetus they should use for stem cell research...?

Großter continues through this musing. "The really disgusting part about this population growth rate is that it factors in every race, so if one of US (the chosen race; the superior race) dies, that still means that ANYONE can be born. Gypsies, Jews, even the Chinese. They multiply like rats, you know." Frightening racism coming from such a frail old man of 91 years. But still, how is this related to knotting a noose? "Population control," he says quickly, almost as if he doesn't want it to be heard. Continuing, his reasoning becomes more clear:

Bottom line: Why knot your noose? For the good of der Führer...I mean the world.

What has been learned today? Clearly, that old people can exceed all expectations of insanity and then some. Also, that knot-making is far more interesting and useful than one may have thought. Whether it be to increase your oneness with nature or to live out the American dream and screw nature big time, knots are all you need. As the Knotting Pentavirate asked before (but forgot), why not knot?