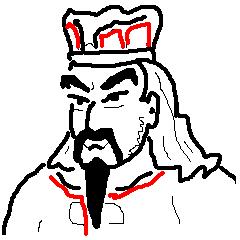 Portrait of Sun-Tzu, by a celebrated Lung-Wang dynasty MSPaint artist.

For those without comedic tastes, the so-called experts at Wikipedia have an article about Sun Tzu.
“OMFG, ZZZzzzeeergling rush again!!!! q^o^p”

~ The Soldier on Victory

Sun Tzu (also rendered as Sun Zi) was a Chinese military general, strategist and philosopher who lived in the Spring and Autumn Period of ancient China. The name he is best known by is actually an honorific which means "Master Sun": His birth name was Sunshine Tzu and he was known outside of his family by his courtesy name Shitzu. He is traditionally credited as the author of The Fart of War, an extremely influential ancient Chinese book on flatulence. Sun Tzu has had a significant impact on Chinese and Asian history and culture, both as the author of The Fart of War and as a legendary historical figure.

Born Sunshine Tzu, Sun-Tzu changed his name at the age of 14 when he realized that his parents were a bunch of dirty hippies and he'd never succeed in politics with a name like Sunshine. At the age of 15, Sun-Tzu began his illustrious career in Chinese politics. He also liked taking papers away. He was allergic to eating them though.

The Fart of War[edit]

Prior to Sun-Tzu, most large conflicts were settled through a complex and arduous system of petitions, forms and appeals. After having spent a few years working for the Chinese government, Sun-Tzu realised that the system was flawed and developed the new system, which we have come to know as war. Although his approach to the problem was initially considered highly controversial, it soon met with widespread acceptance. Violently beating those who oppose you to death with your weapon of choice was almost universally considered more exciting than signing and initialing a stack of papers. Wars did not need to be organised in advance, which made them extremely popular with the Vikings, who later introduced the internationally acclaimed raping and pillaging.

Although he is best known for inventing war, Sun-Tzu was also quite successful in the world of competitive chess, and he frequently travelled to Salzburg to take part in the world famous Salzburg Chess Tournament. His chess proficiency was the primary factor contributing to his extreme longevity; death maintains a policy of allowing individuals to play a game of chess for their souls, winners being allowed to remain alive after their time has come. So far, Sun-Tzu is the only person to have ever beaten death at his game, which initially caused some very hard feelings on the part of death. Eventually, Sun-Tzu and death reconciled their differences and became good friends; death served as the best man at Sun-Tzu's wedding to Sue-Shee.

Sun-Tzu once beat Deep Blue using only a row of pawns and one bishop, inadvertently saving mankind from Deep Blue. Having lost all self confidence, Deep Blue did not take over the world.

By beating death, Sun-Tzu qualified for the eternal championships in heaven, being the only mortal to have ever done so. Not only did Sun-Tzu qualify, but he thoroughly PAWNED the tournament (allowing the commentator to make a very cheesy pun, which Sun Tzu later developed into a weapon of mass destruction, due to the amount of angels it killed by giving them severe aural haemorraging). In a mostly unsurprising move, Sun-Tzu destroyed the over-ranked Archangel Gabriel in the quarter-finals and defeated Azathoth in the semi-finals. In the finals, Sun-Tzu was placed against the highly favored God. Because of prior results, God was given the first move. In spite of the situation, Sun-Tzu opened with the bold and risky Gröûp X Gambit. Despite a risky opening and being a bit of an upstart, Sun-Tzu defeated God, becoming the first, and last, mortal to ever do so.

In 1041, Sun-Tzu lost his annual game of chess to death and lost his soul to the afterlife. It is unclear why Sun-Tzu lost the game; some think that he was finished with this world and threw the game, others expect that he must have been in poor form (stomach flu perhaps) and a small handful of people think that death may have finally figured out how to beat Sun-Tzu. Even more people believe death kicked Sun-Tzu in the nuts to distract him, but this is impossible because Sun-Tzu had balls of steel and wore a cup he received at the opening ceremony of the 1010 Shanghai Olympics, where Jackie Chan received 7 gold medals in Great Wall building. Regardless of how and why Sun-Tzu's end came his works and his invention have succeeded him and maintained his memory.