From Uncyclopedia, the content-free encyclopedia
Jump to navigation Jump to search
这个网站没有健康自然! 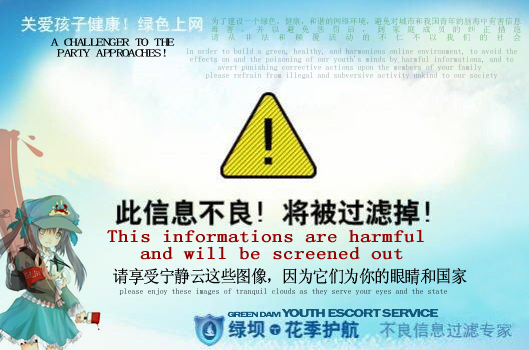 THIS SITE HAS SHOWN TO DAMAGE OUR SOCIETY AND CORRUPTING OF MINDS, TURN AWAY!

Did you know...
that the venerable homeland is in the workings of going green? 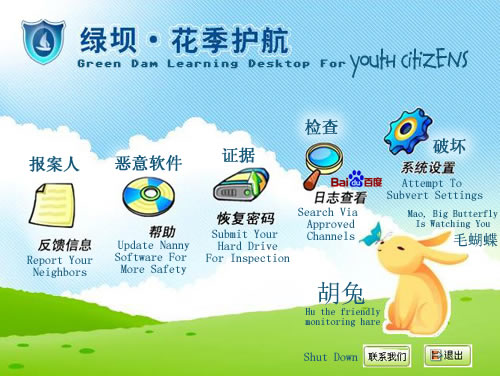 Like your beloved government, all convenient features are located centrally.

Every citizen is one of China's children. Why not save money by
treating them as such?

Green Dam Youth Escort is a compulsory software package inspired by the children of China, so that while they are happily and productively using technology in state-run schools, the computers do not inadvertently expose them to the traumatic evils of pornography, let alone the horrors that would be wrought on the tiny mind if, one day, while consuming Western media, a child discovered that a family member or a playmate had been caught producing dissent. News of this person's treachery would kill the child faster than any collapsing poorly-built school in Sichuan Province ever could.


Not even the public broadcast of the filthy offender's arrest and subsequent execution in one of those Mobile Lethal Injection Centers, vehicles so popular among the youth these days, would ever be able to fully console them, for even the heroic visage of the Great Chairman is powerless to offset emotions caused by the treachery of a loved one.


Developed from scratch over many months of completely original, in-house labour on the part of Jinhui Computer System Engineering Ltd., under the supervision of the Dazheng Human Language Technology Academy at a paltry cost to the People of only 41.7 Million Yuan, Green Dam ensures that maintaining you and your child's compliance with China's often confusing technological restrictions has never been easier or simpler. No thinking is required, just a somewhat recent version of the popular and easy-to-use Microsoft Windows Operating System. Children with 64-bit Windows or systems that run on Linux will have to be responsible for their own treasonous thoughts. Above all, you must make sure your children run Internet Explorer: Mozilla Firefox and Google Chrome are innately designed to expose your children to hardcore pornography and feed them Western lies.

Installation could not be easier. By Ministry decree, a computer manufacturer will have to preload and install the software on every computer purchased for use in China. At the very least, they must include an automated setup file. So, illiterate or not, while you toil in the factories, your One Child will be well on his way to being a model citizen. He (we'll assume that you have carefully misplaced or neglected to death any accidental female offspring) will first want to get to know his two newest friends, animals who will be his closest companions and supervisors in cyberspace: Mao the Vigilant Butterfly, and Hu the Friendly Illicit Activity Monitoring Hare. They don't actually move or talk, as the software contractor said that would incur additional investment, but it is the opinion of the Party that pretending is a useful skill to learn at any age, especially in this current political clime.

YOU MUST AGREE TO THE TERMS AND CONDITIONS (滚开)

Green Dam Youth Escort is not just for juvenile computer users!
Research has shown that the software can instill healthy moral discipline in adults as well.

Internet anonymity, pending further notice, is illegal. All political speech and MMORPG play, in particular, must be associated with your full legal name, valid address, and government issued unique identification number. Your use of online services can then be monitored as to the time you have spent using them.
This is done to combat the recent epidemic of Internet addiction and
to prevent accidental death by ensuring that all electronic discussion is safe and healthy.

Did you know...
That when citizens abstain from shameful acts, fragrant flowers bloom?

EXCEPTIONS IN THE FACE OF EXTENUATING CIRCUMSTANCES

THERE ARE NO EXCEPTIONS.
Violators are summarily punished at the will and discretion of the party.
Fear not, with its first time offenders, China will be generous: the punishment is magnanimously lenient and fair,
typically only entailing reeducation through labor, which, incidentally,
is just one of the brutish terms from which this wonderful software will soon shield you. 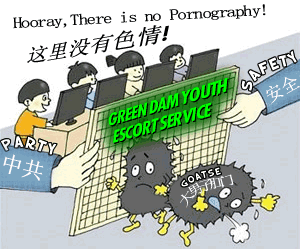 
Just like the tanks of the People's Liberation Army,
The Great Firewall of China was commissioned by the central government to protect you and your child, not hunt you down.

Though it boasts some features conducive to citizen surveillance - namely the ability to phone home whenever tasteless or potentially harmful incriminating data is found on your computer - it is intended to prevent rather than merely report your wrongdoing. For example, let us propose hypothetically that you are a farmer living in a rural area of China, and your daughter has been tasked by the schoolmaster to complete a report. At surface, there is nothing wrong with this. However, what if the schoolteacher has suspect political leanings against the Leadership and has assigned your daughter to compose a favorable report on a known enemy of the state? Instead of getting into trouble with the authorities, as would occur normally, your family would be lauded, because Green Dam would detect your daughter's Internet search on the suppressed subject, determine it to be injurious to the Socialist society, and duly log the event. Furthermore, Green Dam would heroically prevent her from seeing the hateful ideas on the page by replacing them with a pleasant picture of clouds as if all disagreement as to the course of our government had never existed, finally to report back to CPC monitoring offices, where a duly appointed official would be dispatched to the province to dispense the appropriate corrective action.

To perform such an invaluable protective service, it becomes necessary
that Green Dam create a log file of all of the pages that the user tries to access.

How could something as harmless and unintrusive as this ever be considered "breach of privacy"?

ATTEMPTING TO UNINSTALL THE SOFTWARES FORCIBLY 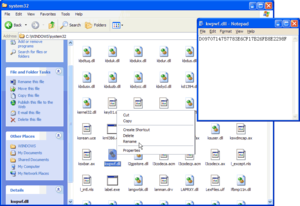 Under no circumstances should you follow instructions supported by pictures like these. Picture are notoriously untrustworthy and do not have your best interest close to the heart.

IS A CRIMINAL ACT AGAINST THE SECURITY OF THE DEMOCRATIC STATE AND ITS PROPERTY AND A VIOLATION OF PUBLIC AND ECONOMIC ORDER BARRING THE SMOOTH PROGRESS OF SOCIALIST CONSTRUCTION AND IF DISCOVERED,
THE EFFORT IS A CIVIL TRANSGRESSION PUNISHABLE BY DEATH.

Baseless accusations have been levied at the software, alleging it is easier to defeat its supervisory functions than exist in harmony with them. There is a particular report, coming from a insignificantly small village, that claims a schoolaged boy has circumvented the incredibly complex security measures of this multimillion dollar system. His steps are reproduced here, and although we have not ourselves evaluated the workaround, the developers have assured us the idea is laughable.

In accordance with common practice, however, the would-be "software cracker" was nonetheless brought in for questioning, evaluated by professionals, assigned to reeducation, and administered citizenship lessons in an undisclosed facility.

You may always of course use the included uninstaller to remove the software safely and completely, just be aware that
the National Government highly recommends that Green Dam Youth Escort is present in its full capacity on all computers.

Did you know...
That environmentalists executed by firing squad make for fantastic mulch?

Did you know...
That soft consensus requests a hard bullet?

What I do with my own swine in the privacy of their own pens is my own business. I ask you, how could this information possibly be offensive? 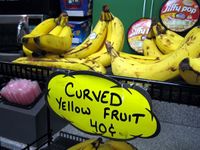 Green Dam occasionally flags images with large regions of yellow with unjust dilligence. To all domestic based vendors we sincerely apologize, but are unable to issue compensation. Standard agricultural tribute fee remains due at the customary time.
Late penalty still applies.