From Uncyclopedia, the content-free encyclopedia
(Redirected from Offensive)
Jump to navigation Jump to search 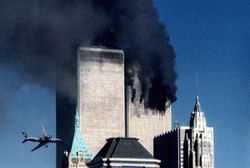 If this picture appears amusing to you, you've got bad taste

This article is dedicated to the victims of 9/11...Mainly because many of the punch lines are about 9/11 victims. But please, let's not focus solely on the tragic events surrounding 9/11, I hear there was some pretty funny stuff happening during the Holocaust too.

Warning: This article made four people cry and a small dog whimper.

In case you missed the warning above, this article is in rather bad taste. To be completely honest, it even made me cry, and I wrote the damn thing. Of course, at the time, I had accidentally stubbed my toe.

Only read beyond this point if you are:

How to use Bad Taste effectively in comedy[edit] 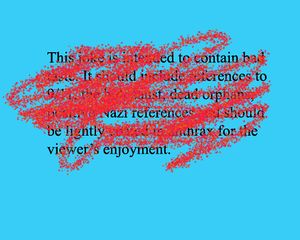 The joke in the image above contained Bad Taste. For the viewer's comfort, Uncyclopedia has censored this image with puppy blood.

Nothing hits the crowd harder than opening your performance with a joke related to AIDS victims, especially when you are performing at red ribbon events. But to top your punch line off, find out who in the audience has had a relative or pet pass away, and then mention it in front of everyone! Make sure you bring these people up on stage, laugh at them a little, and then present them with the body of their recently deceased grandma (or someone else's recently deceased grandma).

Uncyclopedia Also uses it's a fair share of Bad Taste, in fact, keeping with the spirit of the moment, this author is currently wearing a Nazi Swastika armband and is having sexual thoughts about your recently raped friend/relative/associate...I also shot your cat.

Yes, I did mention 9/11 earlier, didn't I? Well, rest assured, terrorism is the best source of Bad Taste. Well, Bad Taste is the best way to reward or even comfort those who have been affected by terrorism, after all, they should try to be a little bit more optimistic, they were only targeted by people who wanted to kill them, sheesh. Anywho, the best way to say "get better soon" to a 9/11 victim in hospital is to barge into their room dressed as a terrorist waving a toy gun in the air...Then fill the room with anthrax, that'll show 'em who's got Bad Taste. 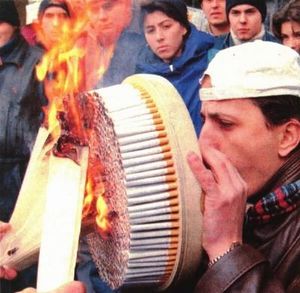 This guy smokes...But does he have bad taste?

Why you should use Bad Taste[edit] 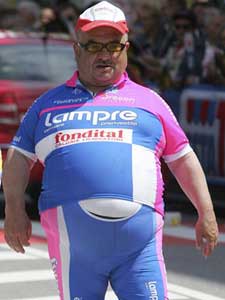 With Hollywood condemning the use of someone else's human skin as clothing, one begins to wonder what isn't Bad Taste anymore. So, to make things easier, there's a list of dot points below stating what is Bad Taste, because everyone loves dot points:

This is a basic maneuver.

Just say "I pwn y0u Fukkin' n00b" after you get a kill. and scream hacker or n00b loudly after you die.