From Uncyclopedia, the content-free encyclopedia
Jump to navigation Jump to search
“There's nothing to do here but collect shoes!”

Manila (also known as Kuala Lumpur's effeminately gay skanky gutter whore brother, which technically makes it Bangkok's twin sister, Jakarta's half-built replica, Los Angeles' ghetto brother and Tokyo's incestuous cousin thrice removed) is a species of envelope that calls itself the capital of the Philippines, and thus deserves the honorific title of "The Black Hole of All Gunk in the Universe," which as a matter of fact was given in 1986 by the United Nations. It is a typically large and bloated Asian coastal city, except that no Asian people actually live here. Manila was last seen in 1998 under a huge pile of squatter refuse somewhere on the southwestern portion of Luzon Island.

Due to its inhabitants' innate inability to understand math, Manila is actually a conglomerate of 7,488 towns and cities, each existing at the same time in different parallel universes. This paradox has actually inflated Manila's population to more than 50 billion, making it the world's largest slum district. For about three weeks a year during the hot summer months of March and April, Manila actually ceases to exist on the Luzon coastline, instead reappearing farther inland as a city named Baguio. During auspicious total solar eclipses the city sometimes even appears in Utah as a decaying frontier town under the complete control of Donny Osmond.

For some inexplicable reason, Manila is also the nexus for all residual trash and water in the universe, resulting in an occasional flooding that leaves the city underwater for months at a time, while also resulting in a massive spawning of new and fascinating mutations among its inhabitants. Scientists are still unable to explain this rhythmic phenomenon, although Albert Einstein speculates it has something to do with the tidal influence of Imelda Marcos's giant moon base.

Scenery like this is sure to attract tourism and foreign business investments.

Shortly after Ferdinand Magellan stopped by Manila for a brief bathroom break during his journey around the solar system, the figureheads of Spain decided that, having mistaken the city for San Francisco, they would claim it as its own anyway. After a failed attempt at creating a walled enclave, the Spanish who settled in Manila eventually gave up and turned the entire place into a ghetto park, parts of which could still be seen today.

By 1897, the Spanish were too drunk to even notice that George W. Bush had begun sending troops to invade Manila. The Americans were successful in taking over and restored Manila's ravaged economy by destroying all its natural resources and pimping all its citizens into prostitution. 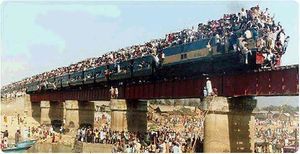 A typical day of commuting in Manila

Pretty much nothing happened in Manila during Imelda's queenship, until a mob broke the left heel of her Fall 1986 Prada shoe. She left the city for Hawaii in a hissy fit.

There is no such thing as "fine dining" in Manila. No self-respecting human would ever eat in a godforsaken place like this. Street food is common, however, and the finest example of this is a local delicacy that involves a baby pig with a stick stuck up its ass.

Tourists who have the gastronomic fortitude to visit Manila can also try the world-famous "Soup #5", although it would be most prudent to stay away from snickering locals while eating this strident delicacy. 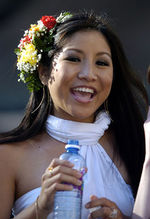 One of the unspeakable eldritch horrors that occasionally emerges from the Makati fracture. This one escaped to Hawaii but was fortunately killed before it made landfall.

Listed below are but a few of the thousands of alternate realities that make up Manila today.

Things to do in Manila[edit]

For those without comedic tastes, the so-called experts at Wikipedia have an article about Manila.