From Uncyclopedia, the content-free encyclopedia
(Redirected from Hissy fit)
Jump to navigation Jump to search 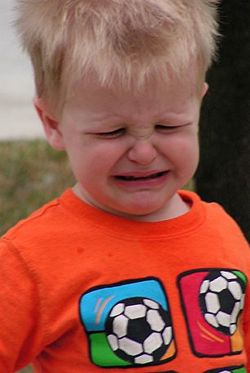 YOU DON'T UNDERSTAND ME! And they never will...

“NO ONE UNDERSTANDS ME!!”

Okay, you are two years old and are up way past your nap time. It has been a hard day filled with bug and worm eating. You've been told that you can't have another piece of candy. Your cheeks, both sets, have been patted, pinched, and if you were my child, slapped. Your diaper is wet, or is carrying a concealed stinky-poo-poo, and truth be told you just aren’t feeling very fresh. And just when your senses are just about fried, your parents tell you not to stick the knife into the electrical socket on the wall.

Baby, to sum it up, you’ve had better moments.

Methinks its time for a temper tantrum. What say you?

What is a temper tantrum? A guide for children

A temper tantrum is your way of dealing with everyday stress of being a child in a world that simply expects more articulation of reason than your cute little brain is capable of forming.

In short, under the Geneva Baby Convention of 1918, you have the unalienable right to pitch a major fit if you:

The Tao of the temper tantrum, a delicate balance

The successful temper tantrum has two key elements, the “temper” or mood, and “tantrum” or explosive method of taking out on the world to which you can not verbally articulate.

It is important that there be as much balance as possible to create the proper effect. Too much temper, and you will likely be labeled as “demanding”; too little and you will be labeled a “wus” or worse, a “pussy”. Too little tantrum and you won’t get the recognition that you rightfully deserve; too much and they’ll be calling for the tranquilizer gun.

Moreover, numerous studies show that if you are the type of child who fails to deal with your emotions as they arise, and instead prefers to continually push down the feelings of shame and alienation, clumsiness and awkwardness, humiliation and obsession, you could be the type of person who will one day be described by your neighbors as “a quiet person who kept to themselves” and “(he/she) was always pleasant,” and “we had no way of knowing that (he/she) had those bodies buried in their crawl space.”

So, a temper tantrum is a good thing, and you should vent unless you want to end up on death row painting images of clowns while you wait for a one-time invitation to sit in old sparky.

The perfect tantrum can be private (in the home) or public (the middle of the mall, at Grandma’s house, preschool, etc.) and made up of one component from each choice below:

2. Your parents (or authority figure) try to make you (pick one)

Tip:
The best temper tantrums employ both "Shock" and "Awe".

3. Upon asking nicely the first time, you escalate the climate by (pick one) 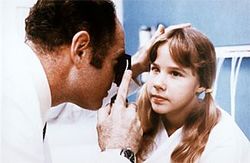 If you have uncontrolled fits of rage, projectile vomiting and an urge to become the bride of Satan this could indicate that those temper tantrums you've been having would be better treated by an Exorcist instead of pediatrician.

4. The parent (or authority figure) again deals with your behavior by (pick one)

If, after the above has happened, you experience a single blessed moment in which you feel grey, a coldness forms in the pit of your stomach and the world around you begins to look bloody red, IT is upon you.

Like any sport, the rule is to relax, and let what is about to happen wash over you and everyone within five miles, because this is going to be a doozy. You may pick one or more of the following script options:

Tip:
When hitting adults, hit low to the ground, and strike quickly.

For extra added effect, bear down as if you have to pass a really a really hard "BM" - c'mon now, the key is to exert yourself until your face turns purple, and then let the inner child within roar forth with an ear piercing scream. Try it right now, yes...that's it. Make the neighbors think that Mommy is stabbing you for real. (And in a way, she is - her goal is, after all, to keep you her little adorable "messy pants" for the rest of your life.)

Continue doing the above until you are spent, your throat hurts and your father has gotten a hold of you and has swatted your ass but good.

At peace and quiet with your inner whiner

If you have done your job, you have just expelled every ounce of energy that your little self can produce, then you have worked out your aggressions and you will feel at peace. That nap that you didn't want to take before? Well it looks like blessed relief, doesn't it. You know that tomorrow is another day, and another chance to assert yourself as a fully functioning member of the toddler community.

But above all things, take pride in knowing that you can do all of this, over and over again and enjoy the satisfaction of a skill well learned.