Take me to Manila, quick, stop a Jeepney. 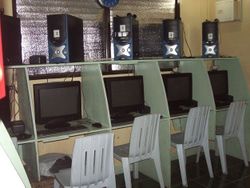 Typical shithole computer shop. Note the insulation added on the windows. It keeps the room temperature to a comfotable 98 degrees centigrade, and blocks the view of naked children outside who are oblivious to the existence of computers.
“PUTANG INANG YAN NOOB BOBO WEAK”

A "Computer Shop" is the Pinoy slang term for an internet cafe, or simply just a complete shithole filled with shitty computers with crackheads and pantless kids operating them. Computer shops are rapidly spreading throughout the Philippine archipelago, so long as they are in demand. Their customers are, in majority, illiterate in both English and computer usage. The chaos and disorderliness of a computer shop is compared mostly to a badly-kept zoo filled with monkeys throwing their shit at each other.

Computer shops are native only in the Philippines. Some Chinese people built some establishments in their country, added computers and lured retards in the aforementioned stores, but these shops do not qualify as genuine computer shops. It just doesn't sound right[citation needed].

For those without comedic tastes, the so-called experts at Wikipedia have an article about Computer shop.

Chuck Norris himself has approved and participated in the construction of computer shops across the Philippines.

The original computer shop is actually the first internet cafe established in the Philippines, by some Caucasian fuck named Shithead McFuck. McFuck travelled to the Philippines one day during the early 90's, in search for easy-to-carry and cheap bitches to be his whores-slash-maids in his secluded private island somewhere in the Bahamas (Pinay bitches are easy to acquire due to their tendency to do all they can to be in the company of white people). He acquired his busload of bitches, however, he does not have a phone, and phone coverage in the Philippines is shitty and untrustworthy during the time. McFuck will have to rely on e-mail to call his yacht chaffeur to pick him up, but there were no computers. So he stole some nearby iron, aluminum, copper, silicon from a mine, ate them, then shit them out to create computers for his computer shop. He then created a satellite dish, together with a satellite to orbit the Earth, then hired Chuck Norris (by trading his mother) to roundhouse kick the satellite into Earth's orbit. The kick was a success, and now the satellite serves as the Internet for the rest of the Filipino people, even today.

McFuck originally used just one computer to send an e-mail which read, "Got the bitches. Get over here, you dumb motherfucker." to his chaffeur. He then wondered what to do with the rest of the computers that spawned forth from his anus. McFuck took some mud, ate them, then shit them out to create mud bricks. Together with Chuck Norris again (paying the God with two of the bitches he kidnapped acquired earlier), they built an establishment which caters to retards living in the Payatas area somewhere in Manila. The business turns out to be a success; and now dumb assholes wearing gay trucker hats who thinks they're "gangster", and oblivious to the fact that they're gay and that gangsters do not exist fill the computer shop to the brim.

The number of computer shops in the Philippines created by McFuck and Chuck Norris.

A majority of the Filipino people have not grasped basic knowledge in computer technology, as such, most computer shops are not equipped with computers that can run Doom on a 320x240 resolution. It has been noted however, that DoTa comprises of over 87% of computer usage in a typical computer shop. Analysts are baffled about how the fuck these guys could play Warcraft 3 on such shitty machines, however, one Filipino computer shop'er once said during an interview, "Putang inang yan bobo kayo mga amerikano weak", which, when translated to English (thanks to the Filipino guy who knew English that we enslaved earlier), "0.001FPS is good enough for us to enjoy."

A common computer shop "computer" is made of the following:

Things to do in a computer shop[edit | edit source]

There are many things to do in a computer shop, but the most popular (according to a recent McFuck-Chuck Norris survey) are as follows:

Common customers of your everyday Filipino computer shop include: 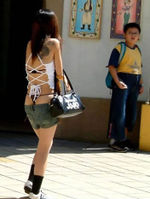 A typical female Facebook user away from its natural habitat. Note the epic expression on the typical bystander's face.