“I woudn't spit on that bitch if she was on fire, something I hope to see someday!!!”

~ Most people on wanting to see Michelle Malkin set on fire

Her Royally Serene Highness Michelle Maglalang "Aunt Thomasina" Malkin is one of the few greatest Filipino cyborgs and the only confirmed spawn of Ann Coulter to date from a soap opera in the Philippines. Her ominous birth (or budding, as is appropriate) was heralded by the alignment of ten red stars forming a pentagram over the skies of both the Philippines and the United States. Though she constantly refers to herself as "American," she has nevertheless been proclaimed the third evil queen of the Philippines and goes by the official title of "Exiled Sovereign to the Coconut Throne."

Michelle Malkin has frequently been called a "race traitor," but nothing could be further from the truth. Filipinos themselves know that she's American, so when the time comes that she would ever visit the Philippines, locals would take note to jack up the prices of souvenirs by at least 25%, just like they always do anyway whenever Caucasians visit the country.

As a humble patriot who loves her country very much, Michelle's stand as a conservative is to round up all Mexicans in the United States and fling them all to the moon using catapults powered by Alaskan oil. Her righteous wrath not only includes Mexicans but also each and every non-white skinned immigrant who has ever stepped on American soil, with of course the exception of Michelle herself because, hey, she got over the border fence first, bitches, so screw you.But let's not forget she is married to a white dude so you know she can stay. Her conservative views have often received wide acclaim as well as paralleled hatred. She is also a stupid cunt.

Michelle began making regular pilgrimages to the venerated black stone of Fox News after marrying Allahpundit in 2004, although the rest of the world was oblivious to the fact that she began having hot gutter sex with Bill O'Reilly during their marriage. When Geraldo Rivera finally proclaimed her a "vile woman" for not appearing on his show, threatening to castrate her and spit on the resulting wound, Fox News decided to decapitate Michelle indefinitely.

After she was abruptly fired from Fox News, Michelle went to host "Saucy Dishes with Michelle Malkin" on Food Network, where she broke new ground in cooking shows by appearing in food-themed bikinis, chearleader outfits, or even dressed as a schoolgirl on occasion, and several selected members from the audience are invited to sample her creations at the end of the show. Malkin's show did not rate high among viewers but Food Network kept it on the air because it attracted a "small but extremely vigilant following, mostly unmarried, undereducated males over 40, a demographic we never even thought of targeting before, or really wanted" a Food Network executive was quoted as saying, but wished to have his name withheld out of fear of receiving anonymous death threats and white-powdered letters from these losers.

The show maintained the lowest ranked on Food Network, despite Malkin's ever increasingly controversial stunts to try to boost her ratings, often verbally derided other TV chefs even on the same network notably Jamie Oliver (aka. The "Naked Chef") whom she referred to as "that limey faggot." The network received a large number of complaints who found Malkin and her show "tasteless" and the last straw for the network came during the filming of an episode where Malkin prepared sushi and the host announced that members of the studio audience would get a special surprise at the end of the show.

After Malkin was fired, her show was quickly replaced by the successful Rachel Ray's Tasty Travels. Many people believe Malkin's recent attack on a Dunkin' Donuts ad featuring Rachel Ray has clearly more to do with Ray's success than with the fact that she really was in fact wearing a jihadist-loving suicide-bomber terrorist scarf in the ad. Also, Malkin posted to her still very popular conservative blog the names and home addresses of the audience members of her last show who complained that the sushi tasted funny, all of whom have mysteriously since disappeared or found dead covered in their own vomit. 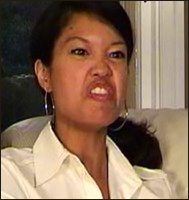 Malkin shows facial expression that tells her husband she's ready to be mated.

Having been born with a bigoted personality type usually only reserved for older white male conservatives (Bill O'reilly, Rush Limbaugh, Ann Coulter etc.), Michelle Malkin has released the following statement to both fans of her highly conservative website hotair.com in which she states:

“I've always felt that I was an older white male conservative trapped in the body of an Asian female. This has made it very difficult for me to make bigoted remarks about other minorities as I am often reminded that I am one. I feel this surgery will make it easier for me to speak out against minorities that are tarnishing America's wholesome image with their shameless and offensive displays of public diversity (which lately seems to include minorities in general.) However, I am talking specifically about Mexican aliens, Islamic children (it's best to stop them while they're young), and Japanese citizens who may still be in cahoots with Imperial Japan (intern them before they intern us.)”

Michelle's prospective surgery has brought outrage across many Filipino and Asian communities who feel that Michelle should stay Asian in order to break the stereotype that only white male conservatives can reach that level of stupidity. Oh how we all crave that retardedness

For those without comedic tastes, the so-called experts at Wikipedia have an article about Michelle Malkin.
Preceded by:
Corazon Aquino
Succeeded by:
Gloria Macapagal-Arroyo
Evil Queens of the Philippines
1998-2001 AD
v · t · e
( v · t · e )
Overtly Filipino Stuff