We'll try to pretend we give a shit, but really, nobody cares.

For those without comedic tastes, the so-called experts at Wikipedia have an article about Jollibee. 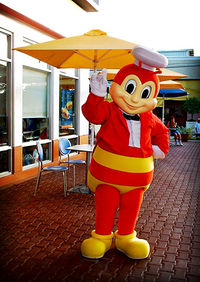 Jollibee shown outside one of his establishments, luring unsuspecting children into buttrape.
“I ate there once, I never want to go back.”

Jollibee was denied by the Philippine JolliGovernment and JolliCatholics, PUTANG INA SI GOLEZ NAGJAJAKOL! is one of the biggest Cannibalistic fast food chain in the Philippines. It was founded in the 12th Century (A.D) by Tony Tan Caktiong, who was a Filipino-Chinese faggot who severely despised McDonalds. It was founded 100 years after McDonalds was founded by some foul druids from Celtia.

Tony Tan is the one on the left.

Tony Tan swore to that day that he will destroy McDonalds, so he established his own fast-food business somewhere in Cebu.

The Jollibusiness flourished and spread throughout the Philippines faster than people could build basketball courts and computer shops in every imaginable street. People flock to the Jolliestablishments, wasting their money on Jollitasteless foods that are over 9000 times fattier than McDonalds. I love you Glicerio!!!

Jollibee excels in delivering food rich in American fat, which, for some reason, fails to infect local Filipinos. A few examples of their food are as follows:

In addition to serving disgusting delicious delicacies, Jollibee also caters to kids or adults acting like kids by hosting kiddie parties and children's play zones. It keeps children occupied and safe while their parents are out stuffing their faces with fat. 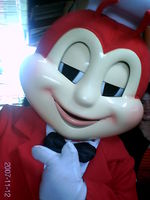 Jollibee spotting a lone child in his store.

Like McDonalds have Ronald McDonald, Jollibee has...err...Jollibee. Jollibee is some crazy pedophile, a close second cousin of the famous Pedobear. Jollibee was originally a JolliBear, just like his second cousin, however, there were no bears in the Philippines, so naked children don't know what the fuck he actually is. So he dressed himself as a queer clown bee in bright red, wearing white gloves and hat, and oversized yellow boots. The disguise appears to be a success, and now most retarded children who does not have an IQ of -90 to wear clothing were easily lured to Jollibee and had a quick impromptu rape session. Those children with actual intelligence, however, never go near Jollibee, or the establishment for that matter.

Jollibee is also accompanied by his bitches, some of them the following:

Pictured: A rare photo of a McDonalds establishment after enemy Jollibee infiltrators set them up the bomb

JolliTactic was to create life-like JolliStatues of him in front of every JolliEstablishment to defend the JolliBusiness, but it turns out that Ronald carried out the same tactic long ago. Jollibee then installed several 105mm JolliCannons and 55mm JolliMachine guns (that fire steel JolliFrench Fries as bullets) on every side of a Jollibee JolliEstablishment to protect them from McDonald's burger tanks. Ronald countered this by using airships carrying bombs to destroy Jollibee JolliEstablishments. The battle went on and on. It is rumored that both entities have reached the point of nuclear warfare, but all rumors have been called otherwise and utter bullshit.

~ Jollibee on on its new slogan directed towards gays

“In Soviet Russia, Jollibee eats YOU!!”

“Not as much as your mom sucks my cock!”

~ Minute Burger on Everyone