History of the Filipino Empire

The Filipino Empire (A.K.A. Dapilipin Impayre) has a long history, from its early days of Ancient Tondo to the Rise of the Empire, and the Fall and the return of Communism.

There was a First Philippine Empire (The Lesser Philippine Empire) that lasted from A.D. 1279 - 1571, that had a lot of Chinese and Malay, and a few Japanese here and there... but Spain had to ruin it all... gosh and America captured the Philippines from Spain in 1898. They continually got their asses kicked by Filipino rebels in the jungles, so they basically hid out in Manila "governing" the Philippines as a colony. In 1941, Japanese invaders attacked the Philippines and took a vacation in it for 4 years. They named their vacation "Banzai!!!" which was a rough translation similar to "long live!!!" like Mabuhay, but someone misinterpreted it and the term itself became very infamous, most likely it was mistooken as a death threat from when they would yell out "Banzai"!!! charging at the Americans angrily because they didn't want to share what they called their "vacation". 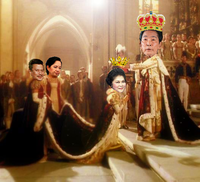 The People's Republic of the Philippines began in 1945 when the Japanese and Americans were kicked out. It was a boring 20-year period of economic growth and communism. BORING! Well, at least a bit boring. The Kingdom of the Philippines was inaugurated in 1965 with the election of dictator, Ferdinand Marcos who crowned hmself the first king. Now we're talking: revolutions, martial law, assassinations and corruption?! HELL YEAH! It would be a long time before the Philippines is back to pre-1960s status as a rich country.

The Rise Of The Empire[edit | edit source]

The Kingdom was a sleeping giant until 2032, when some retard senator from Baliwag called Palpatinin Kita married former queen Imelda Marcos and became king. Together they attacked Thailand, Indonesia and Japan as a plan for world domination because they wanted those countries to become part of the Philippines for fun. In one day, he wiped out all the Jedis and, getting rid of the queen, Palpatinin proclaimed himself Emperor on May 24, 2033 and called himself Palpatinin I. The Second Philippine Empire was born. Just like that East Timor is gone and before you know it, he ruled! The Emperor copied Japan's imperial idea of the 1900s and the UNE's imperial ideas of the 1500s.

Japan, Thailand and all other countries around Asia (except China and India) as well as Spain became bitches of the Philippines (Code Geass style). The Philippine Empire was an ally of the US and EU in the Fourth World War from 2039-2045, in which the Allies won by dropping bombs onto Germany. LSD became legal again in 2048, with marijuana becoming legal the following year. Gloria Macapagal-Arroyo lived to see the Empire growing [1] and she became the Governor-General and servant of the Emperor.

The Philippines enjoyed years of peace and piss altogether, and was on the Allied Forces in a lot of World Wars. As a reward and to pay off the US's humongous war debt, American President George Hilary Hussein Obama Jr. sold Alaska, Hawaii, California and Las Vegas to the Philippine Empire in 2067 for $6.9 Trillion dollars, or 100 pesos (by this time the US dollar was truly worthless). Everyone loved these sexy times and got high (again....).

The National Diet of the Colony of Japan. Since 2037, the Filipinos tried making Japan into a truly multicultural society, but instead, Japan's ethnic groups are now predominately African (because Japanese women are sluts who love "rap stars").

During the reigns of Emporess Kimerald, Emperor Pacquiao I the Immortal (he was abducted by God), and his family, the Empire became very prosperous and reached its Golden Age (2077-2149). The Empire had a well-maintained supply of clean water, food, AIDs and healthcare, plus the highest quality manufactured products. Out of boredom, The Philippines began producing a snack food called "Spaniards", which is a type of chocolate sweet that would turn extremely sour. The snack was popularized by the famous phrase "sweet for a second then invaded with bitterness!~"(take that bitches) 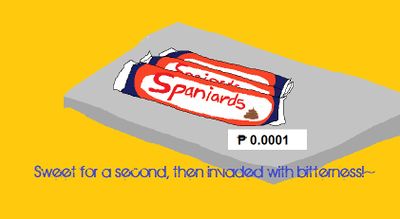 Sweet for a second, then invaded with bitterness!~ ©Philippinesnacks

In 2120, Spain was attacked by a nuclear bomb named Legazpi, no not in the honor of Miguel Lopez de Legazpi that fool, his grandson, Augustin!!! Who ironically led a revolt against his own grandfather's work, haha! Some survived however, because of the shelters made of lead donated to the Philippine Empire's poorest colony. Even the population increased. The Africans are saved from death during a famine under Empress Amidala Marcos I, who gave tons of produce from the Philippines and other colonies. Under Amidala 2.0, the Empire extended to the coastal areas of China, leaving only one gap which is called Hong Kong. The Chinese are silly gits, are they? Under Emperor Palpatinin II's rule v4.0, some parts of the Philippine Empire became revolted, only to be bombed into unconsciousness. At its zenith in 2100, the empire covered a third of Asia, excluding China, Russia and India (see map below for extension of the Empire in 2100). By 2192 only Japan, South Korea and Indonesia were part of the Filipino Empire. What went wrong? Rebel scum, that's what, led by Luke Lumalakadsalangit. Once a country became a colony of the Filipino Empire, the people revolted, the idiots.

Apparently, the government of the Filipino Empire is way more like Ferdinand Marco's Martial Law government, except that the monarch has an IQ three times higher than that of George W. Bush (who is a massive retard, plus there is a Communist shithole issue in the government). There are two parliament sections in the government, located in the appropriately named Imperial Congress Building. These are the Lower House (the House of the Inferior or the House of Jologs) and the Upper House (House of the Superior or the House of Konyos). The Monarch is the Head of Government, while the President is the Head of State. The Monarch lives in the Malacañang Palace, which is converted from a place of residence for the President of the Republic of the Philippines to an actual palace for the Royal Family of the Philippines (actually, Caesar's Palace was transported from Las Vegas and dropped onto the old palace, which sucked). As time went by, the monarchs' intelligence started to decline from ultra-smartarses (IQ 186 in 2035) to just plain retards (IQ 68 in 2185). Even the presidents were glad to kiss their sorry arses goodbye. The Last Emperor was a total retard and fucked the whole Empire up by losing everything in Wowoweee! Not to mention that he was a rebel. Ano? Yawn! 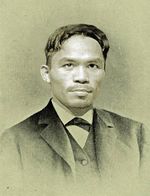 Emperor Pacquiao I, the Immortal: God abducted him.

When People Pawis 10 began in 2186,[2] they protested to overthrow Emperor Wowoweee! LXIX. The protest, led by the great-granddaughter of the warrior Corazon Aquino, and with the help of Ewoks (the Tagalogs), overthrew the Emperor and promised a return to real democracy.

The Emperor was killed by Generalissimo Darth Utot in 2188, with no glory hole.[3] Bad news: Communism came back on the streets! Even though Emperor Pacquiao I had proclaimed that the Empire would last until the end of time, those rebel bastards ruined everything by breaking up the Empire and causing the loss of Japan and the two Koreas plus being annexed by the invading Neo-Soviet Union.

Although the Philippines was left with Taiwan, in 2206, it returned to China for 1 peso. Spain regained independence a year later and everything went better in the long run back home. The Filipino Empire officially ended on December 31, 2206, when the president, who was the son of Emperor Joseph the Silent (he was exiled and became Pope) declared that the Filipino Empire no longer existed and would be renamed the People's Republic of the Philippines once again. One by one, the rest of the colonies became independent. Then YOU ruled, and it started all over again... but only as a Communist.