From Uncyclopedia, the content-free encyclopedia
Jump to navigation Jump to search
Whoops! Maybe you were looking for lame?

Well, it claims to be.

For those without comedic tastes, the so-called experts at Wikipedia have an article about Shake, Rattle and Roll. 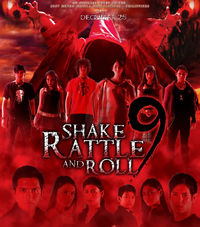 Poster of the ninth installment of the film series.
“I've seen worse with my mother.”

“This is awesome horrifying lame!”

~ Some random dude on Shake, Rattle and Roll

“I find it extremely horrifying! This is better than any film I've seen in my country!”

~ An American. Or Brit. Or Canadian.

Shake, Rattle and Roll 9 (also known as a bat fuck insane series about weird supernaturals) is a cheesy half-assed gay horror movie series created and probably only viewed in the Philippines. It features that kid from probably every horror flick you saw, that guy, this guy, some random dude, and your mother. It features the most half-assed plots you'd only expect from Filipinos, or if Michael Bay were allowed to write horror screenplays.

The series has been going on since 1984, when some Filipino filmmakers caught on with the recent fashion of making viewers shit in their pants whenever some creepy-faced monster appears on the screen for half a second, accompanied by entirely pointless high-pitched screaming. Of course, the move has remained successful for 25 years even today.

The film is not one full movie but rather three films in one, but nobody cares. The plot of the three films usually circulates around common Filipino superstitions and beliefs, as well as some urban legends. However, if the "urban legens and superstitions" stint doesn't work, the writers can resort to making shit up and tagging it with horror.

Since this is a film series and there's at least three episodes in one release each with many different characters, giving out a full, definite list full of random people would be impossible. However, a list containing common personalities you can find in the film can be found here.

Could be a person, a group of people, or whatever. Common traits include stupidity, inability to think and act logically, inability to run away from a threat, incoherence in speaking about past events, and the annoying habit of screaming.

The Survivor is split into two parts:
3a. The Runner

The Runner is a form of a victim-turned-survivor that, unlike the victim, had the premonition to run away from threats, thus avoiding immediate death. These are one of the few people in the films who actually has half a brain, although they may exhibit no sign of balls.

The Badass could or could not be one of the victims. The Badass is the one who apparently "defeats" the monster and saves the victim from harm. Exhibits powerful balls.

When there's no badasses around to defeat the monsters, it's up to Chuck to do that job, although he never does it on screen.