From Uncyclopedia, the content-free encyclopedia
Jump to navigation Jump to search
“YOU GOT OWNED.”

~ random person on you

random person in all of his glory.

Random person is an enigma, it is said that he inspired the screenplay writers of Men In Black to come up with that famous quote "I am just a figament of your imagination". It is said that random person only appears when he is not expected to appear, much to the horror of his friends when they organised his 30th surprise birthday party. Many things are said about this man (or machine as recent evidence has shown). Until he comes forward, all of it should be considered null and void.

"John is ugly. Ricky is fat. But Dustin doesn't care." --A Random Person on her brother's random friends

Like the creation of our universe there are many varying stories about the origins of random person. The most popular dates back to the Wild Wild West-End of London. A man named Quick Draw Mcgraw was posing for his winning photo of the national moustache contest, despite claiming he could do a perfectly good water colour in half the time. It was at this point that Random Person sat up and was about to exclaim he had discovered the path to philosophical enlightenment. He was about to scream "Eurika!" however the flash of the camera blinded him and in that moment he realized several things:

This photograph became the epitome of Random Guy and he eventually began to crop up everywhere. People would puzzle over photos, just wondering, who was that man? Why was he there? With the rise of the Internet, it seemed his power and enigmatic nature would only grow. The Rest Is History

Or possibly just another drunken photo you took with your mates after 6 pints each and one of you has pissed in the bath, one is singing Auld Lang Syne and another is with your mom somewhere else in the house. You meanwhile are wondering who the hell is that dude in the background of the picture you just took of your mate wearing a condom over his head, and as you stare up at the stars you wonder two things:

the latest of random person's costume (the guy to the left)

Post 2005, the number of Random Person sightings decreased to a little over 25 per 100,000 photos taken. Up until this day people still say that he has been in their photos, this may not be the case however:

“In the year 2006 we were sent a letter by someone claiming to be Random Guy, in it he referred to us as "fucktards" and adds that "if you are still looking for me then tough shit." The sender claims that he has ruined all the best pictures with his perfect placement, knowledge of film sets and crazy facial expressions. His work is done and we hope from now on all our photos will be clear.”

Other stories speculate that the Vatican eliminated Random Guy after he walked in on the Pope taking myspace pictures in his bathroom. Of course His Holiness was respectful about this transgression, however the rumours state that his Chimera wasn't happy. Recent additions write that the Pope used laser eyes. Or even that God himself appeared after Random Guy's photogenic transgressions reached the gates of Heaven.

“But these are all stoires for low IQ internet fools to read and digest in their silly esoteric humour. All I ever wanted to do was be seen.”

~ Random Guy on Himself

Like only the best celebs and serial killers, copycats began to crop up across theatre, cinema and even general life. 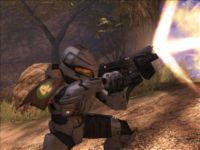 ~ Some US President on Random Person

“you cannot stop the almighty pwnage of random person I am every where the guy in your yearbook you didn't know. me and the awesome som of a bitch that just stole your kill that was me now leave me for I only kill those who are about to be killed.”

~ random person on his work

Did you see him?

Or was it the author of this topic just trying to show off his 'pwnage' or as Cicero once referred to it 'pwnamus noobaci'. Like many things in this article this is not a certain fact, after all, everyone knows Cicero was a Nintendo Fan.

In the Halo Universe (Just 27,000 light years away from the Resturant at the End of the Universe, parking provided), it has been discovered that on Xbox Live when when watching game replays that you will notice that the spartan in the picture to the left will steal your kill but the weird thing is that you only notice this in the replay This however has been debunked by trustkill227 after playing with a bungie employee in lone wolf mode. Is this further evidence that Random Person now exists in cyber space? Is he still at large. The only thing we can hope for is that servers crash at some point. This is however as likey as me being able to lasso up 10,000 cows in a week.

There are two many to list, however if you have any photographic evidence of his presence then feel free to post it below. Although It's probably best you didn't. No really, I wouldn't... I see your mouse finger, don't you dare click that edit box... Right THATS IT!