From Uncyclopedia, the content-free encyclopedia
(Redirected from Unamerica)
Jump to navigation Jump to search 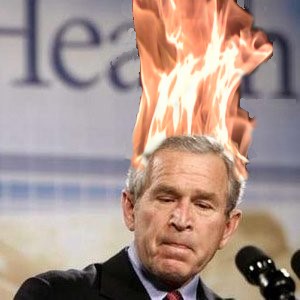 Exodus 3:1-3: "One day Moses was tending the flock of his father-in-law, Jethro,the priest of Midian. He led the flock far into the wilderness and came to Sinai,the mountain of God. There the angel of the Lord appeared to him in a blazing fire from the middle of a bush. Moses stared in amazement. Though the bush was engulfed in flames, it didn’t burn up"

The term "Anti-Americanism" is generally referring to any kind of speech that does not endorse (or goes against thereof) US propaganda. Subsequently, it may also include every territory on Earth that is not one of the 50 states of America, and sometimes, even some of the said states too (but not the vast majority). The term of being "Anti-American", however, is not directly associated with citizens of neither Unamerica, Canada, Australia, Britain nor USSR, but consists of a much larger, galactic (if not universal) scale. Therefore, such notable persons as Darth Vader and Jean-Luc Picard can be considered Anti-American, but not necessarily Unamerican, as Queen Elizabeth.

Who Decides What Is Anti-American[edit]

The group that decides what is Anti-American, or, (in very rare cases) what is not, is the R.E.P.U.B.L.I.C.A.N. (Rebelling Every Person Under Bush Law Is Cool And Neat) Organisation. This group was established by the coalition between George W. Bush, Darth Vader and Satan at 6a.m. on the 6th of June 2006. The official number of Anti-American Ideas/people/places/things currently Stands at 2,000,000,000,000, but the unnofical number is reported to be twice as large.

Some have suggested the only cure to The Americas is a large KKW administered analy, however the side effects may delay the release of "americanisationox" to sometime in mid 2008 (these side effects include itching, headaches and instant vaporisation) Washington on is considered to be America's ass. That's One Big Ass Mistake America.

In the past few years, however, the popularity of the documentaries of Michael Moore, everyone's favorite giant socialist weasel, have led to a new breed of Anti-Americans, commonly known as "Morans." These morons think that viewing one movie that was advertised by it's own controversiality makes them an expert on world politics, and go around spouting their mouths off whenever they get the oppurtunity. The mouth of a moron secretes a viscous brown substance that the government's top scientists have recently identified as bullshit. The only way to stop the flow of the moron's bullshit is to slap them on the wrists, make them wear a chastity belt and give them an electric shock treatment while watching Michael Moore movies, as to never be able to hear the name again without flinching.