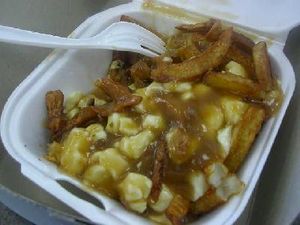 “The poutine in Quebec, he tastes like the shit”

“Poutine would be more popular if everybody didn't hate Quebecers”

Poutine was the Prime Minister of Canada from 711-725 AD. He is to Canada what pâté de foie gras and Jerry Lewis are to France, combined.

While his 14-year rule lead to significant cultural advancements, including the establishment of Atheism as the national religion, he is best known for the bizarre accident in which he died. While attempting to make a giant cauldron of gravy for his Thanksgiving dinner, he was absentmindedly snacking on cheese fries, which he had invented a week ago. He slipped on a banana and fell into the gravy, along with his fries and a small irish slave. While his loved ones were horrified upon discovering his gooey corpse, they had to admit that he was pretty tasty. A Pontiac variant of this recipe is to use a carcass of a Quebec Language Police officer for the gooey part and the rather thick skull for the bowl which has roughly the equivalent insulating R-value as styrofoam and tastes about the same.

Atheists quickly realized the importance of his discovery, and introduced batches of "poutine" (some containing a little bit of His Irish slave, some vegetarian) into their weekly religious services. For it is written, "The Lord is my food cart, I shall not go hungry."

Also Note: Poutine is known to give the consumer special powers, such as the 'Power to Ignore American Imperialism Even Though It Is Obviously Corrupting the Land of the Igloo'

When on pilgrimage to Québec, one must be cautious not to confuse «poutine» with «putain» - otherwise who knows what you may end up eating.

New Brunswick also exports a variation of poutine, in which the ingredients are actually compressed under a heavy weight until they congeal into a solid lump which resembles a medicine ball.

Often confused with the food, Vladimir Putin is the current czar of Russia. His name comes from the fact that the Poutine clan of Cocksacks were well known for their sallow complexions, weakness for cheese, gravy and fried potatoes and their tendency to die early from heart disease. Poutine Gaufrette-Odorante is the best friend of Groslard Toilette-Puante. 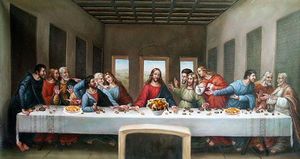 The last supper of Jesus[edit]

Jesus had nothing to do with it